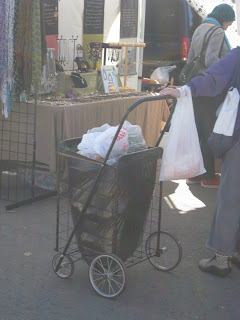 One of these days, you won't see plastic like this! I have many many photos of the plastic going through the markets. Here is a plastic bag as a liner and then that is full of plastic bags!!
See our produce bags, please!
Posted by French Basketeer.com No comments: 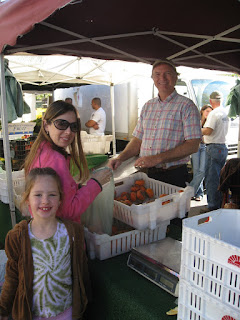 There is just one vendor at the Calabasas FM that has biodegradable bags; it's called Etheridge Farms and they have NICE citrus and a loyal following. They pay a few cents more they say, for the biodegradable bags, but they know it's worth it. I have a sample and am testing it in my compost.

They introduced me to the local vendor for plastic bags, and I'll have a post on that later.

The guys at Etheridge "get it" and I wanted to post on that; I asked these ladies if I could include them for a photo for the blog and they gladly complied!

The bags are colored green so you can't miss them vs a regular plastic bag.

Posted by French Basketeer.com No comments:

Justin Timberlake is a Normal Dude!

Today in Brentwood FM, we had Justin Timberlake and Jessical Biel visit us. They stopped in the booth next to mine for a while and eventually made a purchase. There was some jerk trying to very serepticiously take their photo on his camera phone; scratching his chin with his phone and I said come on dude leave him be!....later a girl was there with the same phone but I'm not sure they succeeded in getting a shot. As they were leaving, a woman accosted him right in front of my booth, for an autograph. He said he didn't have a pen, and I said I did; so he signed some scrap of paper she had, with my pen.

Several years ago I was in Chicago at Neiman Marcus and found Oprah shopping next to me. Pawing through the racks like me. I asked the sales girl, discretely, uhm, is that Oprah? and she said "it's a rule" no one bothers her. Good for Chicago. I felt badly for Justin today; I know he is a celebrity, but can't he just be a regular guy, out at the farmers market with his girl????He has a skinny butt, but otherwise he's just a regular dude!
Posted by French Basketeer.com No comments:

Top of the Line! 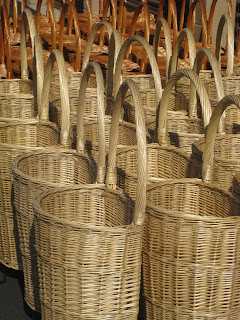 The rolling carts are finally here!!! As the French Basketeer we "of course" carry these carts; they are used all over France when there is more than one person can carry....

These are made in France by a family enterprise that is 3rd generation basketry and caning; they know their stuff...this is a high quality product.

The carts come in honey or brown/lidded. Both have the twisted wicker handle; more photos later.

Posted by French Basketeer.com No comments: