Dad’s final words out the door yesterday morning: could I watch the World Series with him that evening, as well as Jeopardy?  And oh, could I also make him a coconut cream pie that we could eat while watching the game?  What could I say.  This is just the reason why I try to always have some pie shells in the freezer, usually store-bought Marie Callender’s, which is a pie store in Southern California that also sells pie shells at many grocery stores.  But as I started to bake the shell for the pie, I thought about what I’d like, which is less pie, but the same taste. 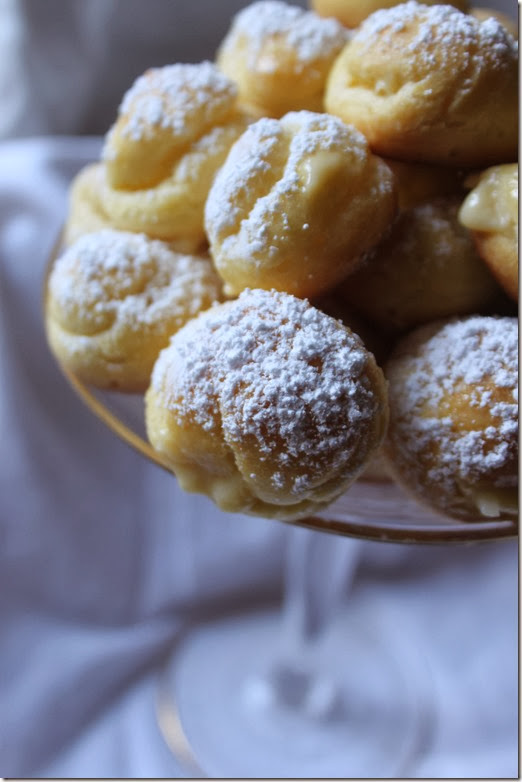 Inspiration struck, and I got out my mixer and a sauce pan.  I baked the pie shell, then made a half recipe of dessert creme puffs; you can see an older post I did on how to make these HERE.

The filling is the same for a coconut cream pie or coconut creme puffs:

For the pie topping:
Two cups fresh cream, whipped with a teaspoon of vanilla and sugar to taste

One saucepan
One small bowl

It’s very easy to make: mix the sugar and corn starch together in a bowl with a small amount of the milk.  Add to the rest of the milk, in a saucepan, and heat slightly.  Break the egg yolks into the small bowl you were just using, then blend a small amount of the heated milk with the egg yolks and blend, then return all to the saucepan.  You are making a custard.  Cook over moderate heat until slightly bubbling and thick.  Add the butter at the end of cooking, off heat, and stir to melt and blend. Add the vanilla. 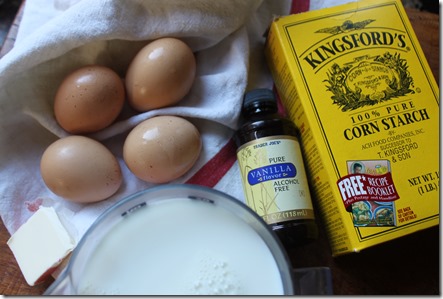 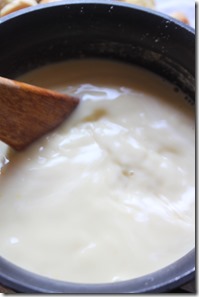 My family loves coconut so much, I always look for it and buy it.  At left is commercial shredded coconut, at center the fine coconut powder I buy in France, and right, the fresh coconut flakes I bought at the Persian market last weekend~ 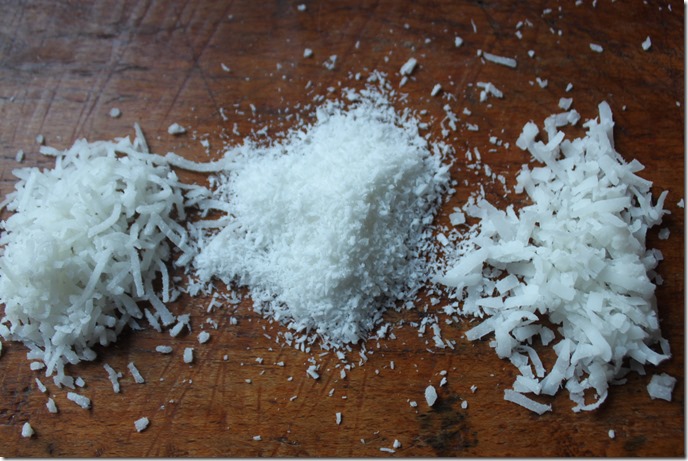 If I were more ambitious, I’d shred fresh coconut, but it sounds like a lot of work, so it’s easier to just buy it.  I like the French coconut because it doesn’t have added sugar, though it is a little dry, but it gives a coconut taste without too much texture, which is fine for many recipes.  The coconut I got at the Persian market is really good though, and tender and fresh.  I’m going to use a combination of these two for my pie and puffs. 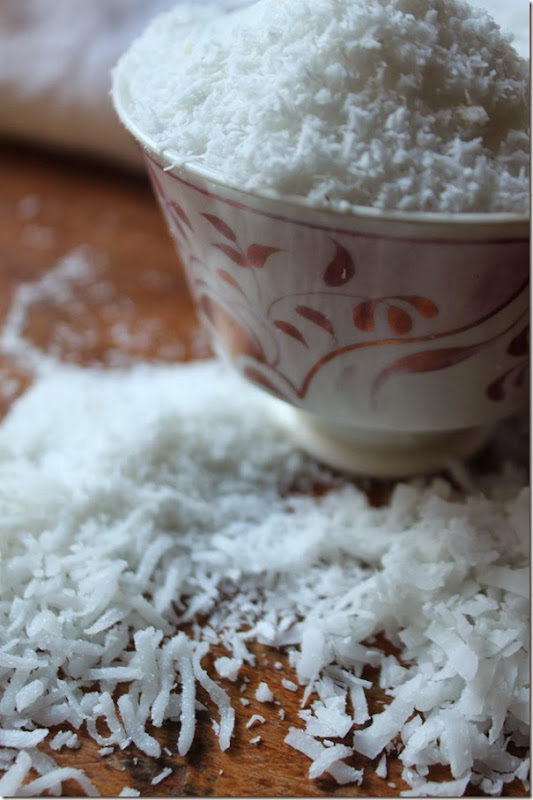 When your custard is cooked on the stove, let it cool for a minute, then add the coconut off heat.  Spoon into your pie shell.  Set the pie in the refrigerator to cool. 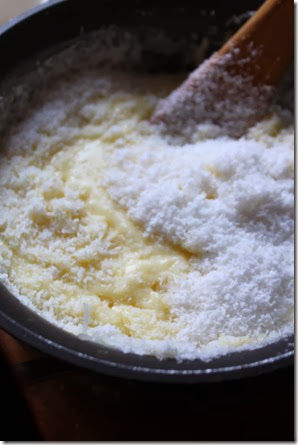 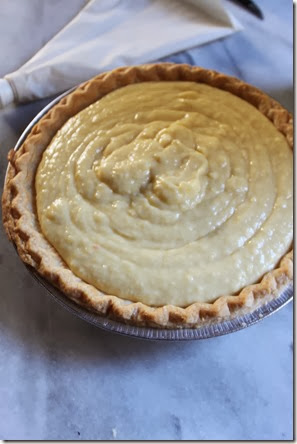 I baked the pie shell, made the puffs soon after and made the filling in rapid order.  I made just a little extra filling this time, enough to pipe the 42 little puffs I made.  One-half puff recipe was one cookie sheet of tightly spaced, bite-size puffs.  It was plenty, and they looked really good with the coconut filling~ 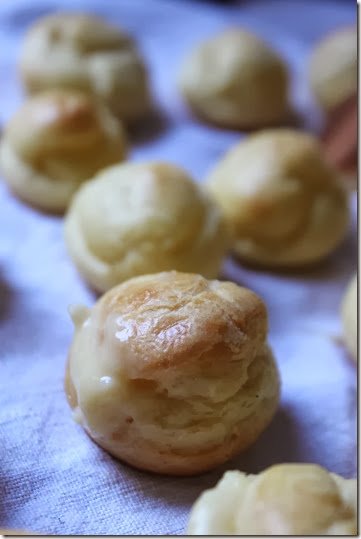 And then they got a dusting of powdered sugar and went to chill out until after dinner. 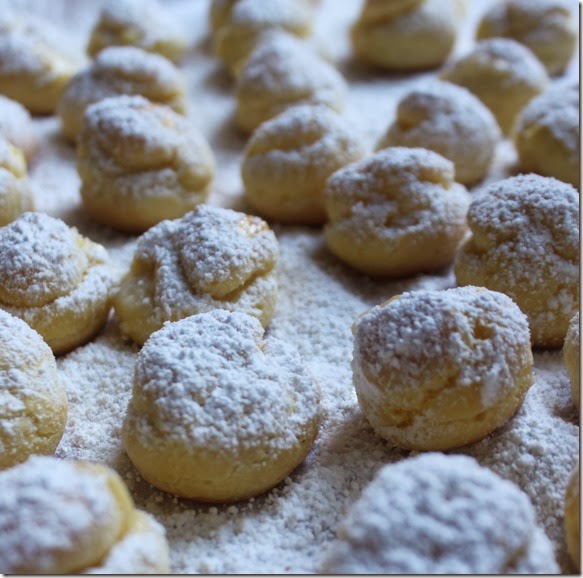 While I finished the puffs, the pie was chilling.  And then I whipped the cream, using a mixer.  I use a big fat piping tip for the whipped cream on top.  Presentation is important for a good pie, and I like a pie like this that is piled high with piped cream. I usually keep going until I use all the cream.  Pile it up in the center after you have completed one single layer.  This is also the tip I use for cupcakes and meringue or cream on mini tarts; I use it a lot; it’s a great one to have and it costs about $2. 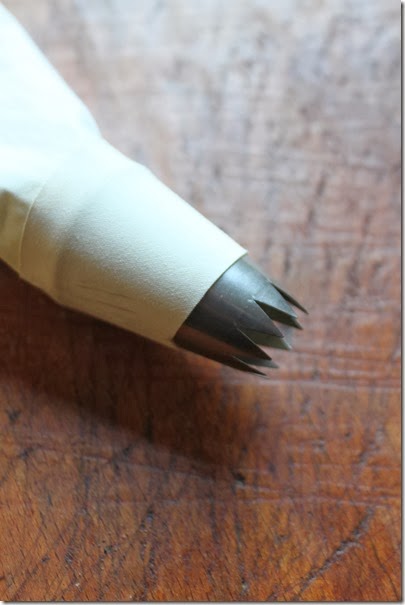 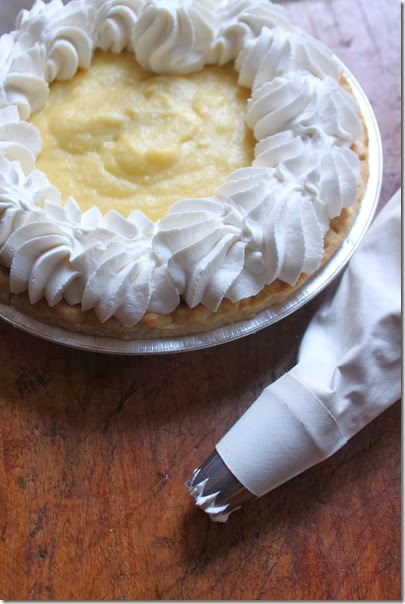 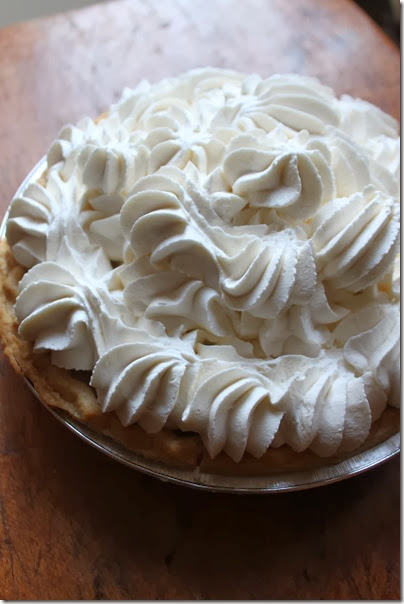 Lastly, toast a little more coconut in the oven under the broiler, tossing it around slightly with your fingers to toast evenly.  But watch it carefully so it doesn’t burn.  This is borderline over-toasted since I was making two recipes at once and a little distracted, but it’s still ok.  Be sure to let the toasted coconut cool before you sprinkle it on top of the cold whipped cream or you’ll melt the cream.  I served the puffs in a pretty footed pedestal plate. 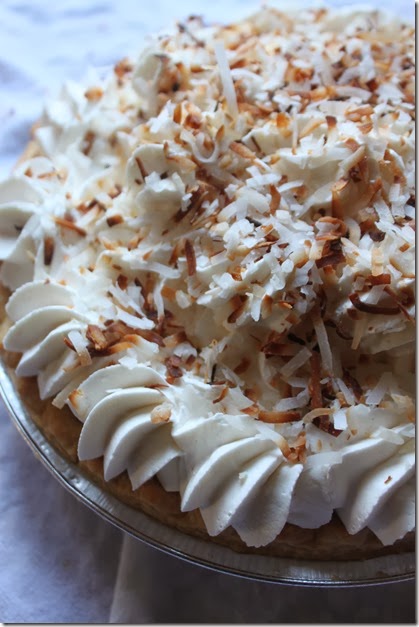 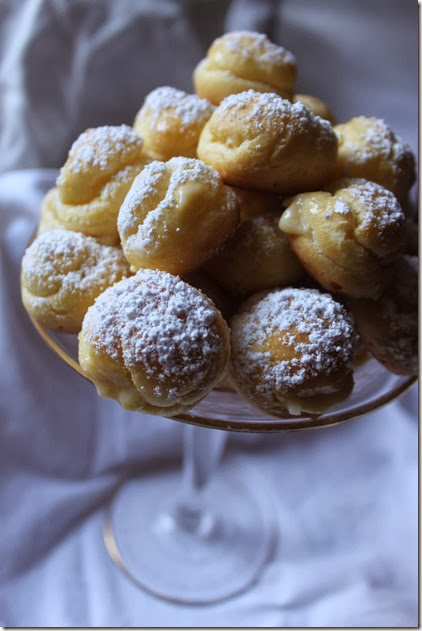 These two recipes took me an hour to make, start to finish.  Not bad, though I’ve made them both so many times, I can manage the two recipes at once.  My parents easily ate their way through the creme puffs, and showed great restraint by saving the whole pie for tonight.  It’s much better having chilled for a day anyway.  Either one is easy to make, and as far as “American” desserts are concerned, very near the top of my list.  And if you like creme puffs but never had them with coconut filling, give it a try.  Very good party food too, with the holidays coming up.