One of my consistently best-selling totes is the style I call Marseille. This tote features a traditional African pattern made of woven raffia. A lot of people carry this bag on a daily basis; it holds up well and is a very sturdy tote; I guarantee all my merchandise, btw:

I named this style Marseille because the City and the Pattern are both very complex, textural, and time-worn. The port city of Marseille is the oldest city in France, and since Greek times it has been an important crossroads of trade and import. In part because of its close proximity to the African continent, there is a strong African undercurrent in the city; it reminds me of New York in some ways: so many people of so many nationalities, all living on top of each other while preserving their own language and culture. The ferries come and go every day to the North African Coast; there is a pulse to Marseille like no other city in France; R and I were fascinated by the ochre facades and boats of the Vieux Port; we have it on our list to go back: 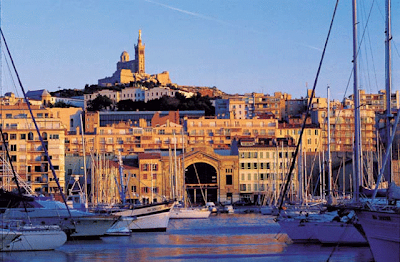 In Madagascar, they have names for some of the patterns. What I call Houndstooth, and some shoppers call "plaid," the Malgagasy call Chickens Foot. But this pattern is quite simply known as "traditional African design." It is a pattern that is frequently seen in African weavings.
One of the best-known sources for antique African wovens is the Kuba Kingdom, which was located in what is now the Democratic Republic of the Congo. It survived from about 1625 to 1900, when it became part of the Belgian colony. The production of the weavings involved the entire clan, and the elborate costumes which resulted were used at ceremonial events; the weavings were used a lot for voluminous skirts and trains, sometimes up to 25ft long. The Kubas were experts at the various techniques of dyeing, applique, patchwork and embroidery. They loved to embellish everything, usually with shells, beads and seeds; they created fabulous textiles, cups, hats, boxes....the most impressive pieces are their large helmet-style masks: 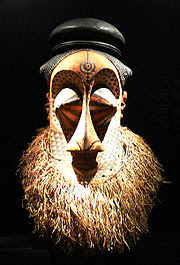 Now, I personally wouldn't ever have one in my house, but they are fascinating pieces of art! My friend Liza works with Congo; there has been no mail service in years and it is in the top 10 of Least Developed Nations of the U.N.; the per capital income is under $1,000 per year. There have been so many problems: civil wars, economic collapse, hyper-inflation. It's interesting too that French is also an official language.

The Kubas were especially well-known for their textiles woven out of raffia; in many cases they tufted the raffia to add additional texture to the fabric; see two examples here; the raffia for the tufting is cut close but not knotted; the variation in style is prized: 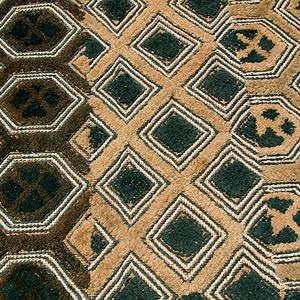 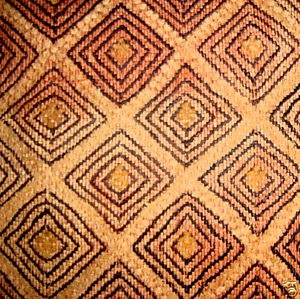 Patchwork pieces are still being made in Congo; similar pieces were inspiring to Matisse and the avant-garde movement; the diamond pattern is shown even on the patchwork: 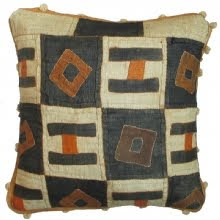 While I find the patchwork interesting, I love the diamond patterns, a motif that is repeated constantly: 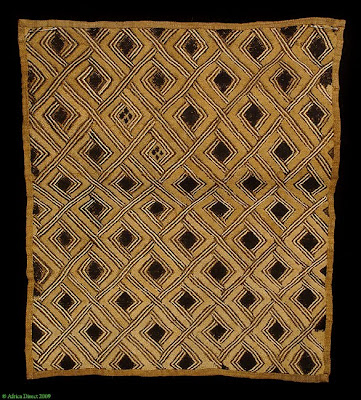 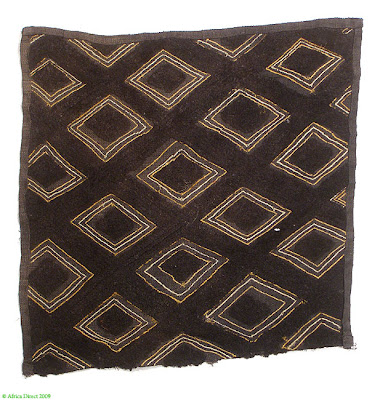 some of these images are courtesy of Africa Direct. 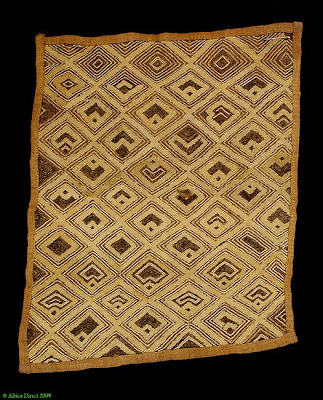 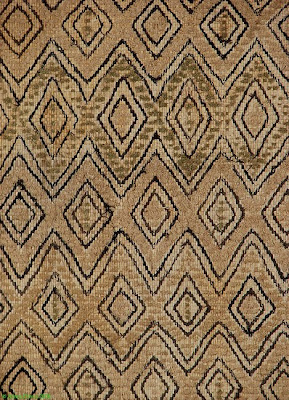 When I went to the NY Gift a year ago, I picked up this piece at the flea. I went to ABC Home later that day and saw similar pieces for multiples of the price I paid, though I didn't see any as nice as this one, which is slightly tufted; at some point I'll frame it or use it for a pillow: 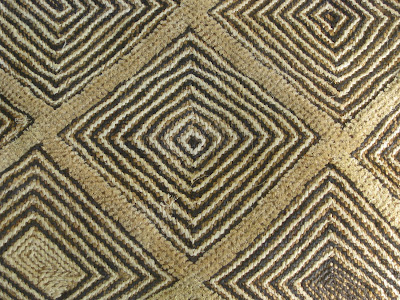 There are some variations in my piece, which make it interesting; in the U.S. we tend to like a uniform pattern; but for these pieces, variation is the desired look and the expression of the artist: 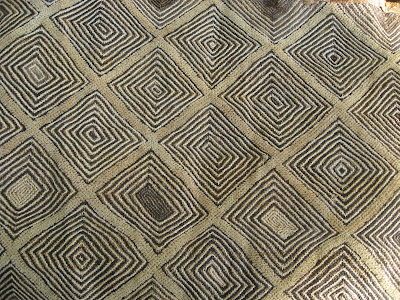 Ballard also has this same motif on their site, in a series of jute rugs; they call it Coventry; I have no idea why they called it that! It's the classic motif whatever you call it...

The woven raffia used to make my baskets is all hand made of organic materials-- variations are to be expected in handmade items like these. Some of the weaves are more loose; if you are a reatailer or order off my website, I ship only the tightest weaves that match the photo on my website. The looser weaves, shown below, are at the markets; still very attractive and much loved: 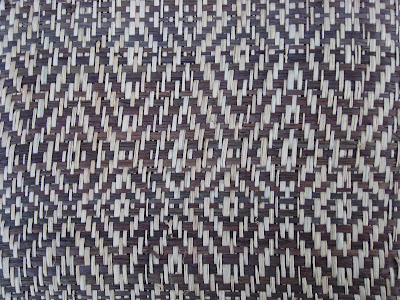 My next shipment from Madagascar will include yardage of this fabric. Mirrors? Bulletin boards? Picture frames?
I'll have some other new lovelies for you using this classic fabric.
Posted by French Basketeer.com