Every now and then, somewhere in France, you will stumble upon a menu offering that includes the words Moyen Âge or Middle Ages.  It gets your attention, right?  Often times, this ends up being a dish created with a base of Almond Milk.  While many of us today appreciate almond milk for its dietary advantages (primarily because it is non-dairy and so lactose-free, and also cholesterol free), in the Middle Ages almond milk was important for different reasons.  Since cow’s milk would spoil quickly, it was reserved for butter and cheeses, and almond milk was used instead for many baking and cooking purposes.   And for religious holidays where fasting was required, such as during Lent, in the Middle Ages the restrictions were greater than today: dictating no dairy, no animal products and no meat.  Almond milk isn’t so bad in a dish if you consider the alternative: water…

The word almond comes from the Old French word Almande, and production continues to be centered in the Mediterranean climates of the world, including Spain, Italy, Iran and France.  French production is small, amounting to only about 20% of what is consumed in France.  I look for them at the French markets, and if I ever see raw or powdered almonds listed as French origin, I buy them!  Here in California we grow about 80% of the world’s almonds.  But we also have all kinds of crazy rules and laws, which require almonds to be steamed, pasteurized, irradiated or chemically treated before they are sold, even if they are still described as “raw.”  It’s one of the things that really drives me crazy, how something that has been treated can still be called raw, but you really can taste the difference, so you’ll have to shop around.   Farms like Hopkins are in many of the farmers markets, and can provide a truly raw almond.  Out of curiosity I bought these at Trader Joe’s this week; they are labelled as raw but they don’t taste particularly raw, to me.   Still, it’s what we’re going to use here since I want to show you how easy it is to make your own almond milk and then, how to make soup from it.

Two pounds of raw almonds
One large bottle of Perrier
Filtered water, about 3 cups
A few kitchen bowls and a blender, mini-prep or a mortar & pestle if you are going manual! 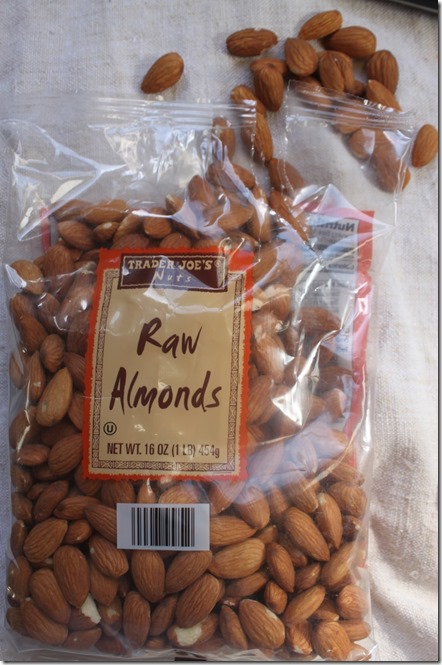 Some recipes call for the almonds to be blanched (the brown skin or seedcoat removed) but I don’t bother as this means they have to be boiled and I’m after the raw taste.  Put the almonds in a bowl and pour enough Perrier on top to cover them plus about 1” of water on top.  Set a plate on top of the bowl to cover it and let the almonds sit on your kitchen counter for 1-2 days, stirring once or twice during that time.  They will absorb the water and swell up like this: 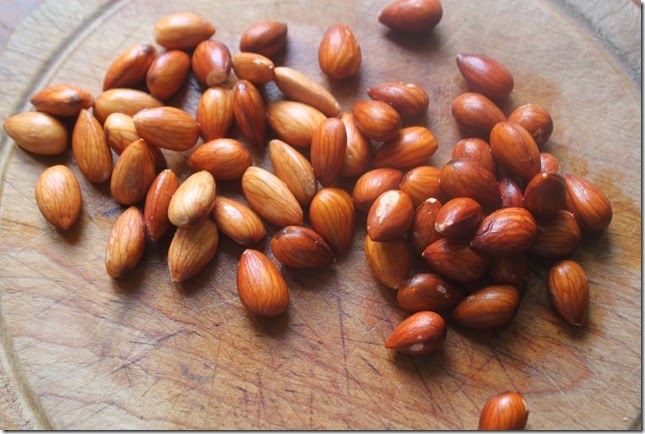 There is a difference between all of the almonds on the market as I mentioned; on the left above are bulk almonds from Smart & Final, and TJ almonds on the right.  But they both went into this batch of almond milk together.  After the almonds have absorbed the water, rinse them, and prepare a big bowl with a strainer on top, lined with a dish towel, like this: 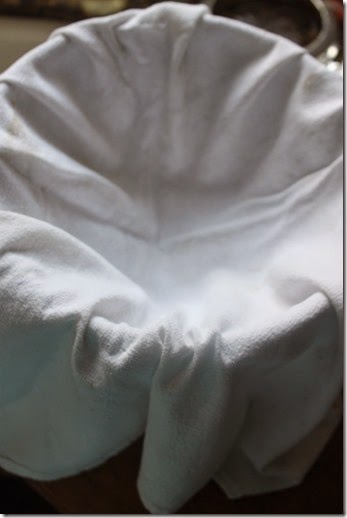 I’ve never dared to make almond milk the old fashioned way, in a mortar & pestle; though it sounds intriguing it also sounds like a lot of work, so I use a mini-prep.  And in case you ever want to make almond milk on short notice, you can grind them up in the mini-prep and let sit in water for an hour before blending.  Back to our basic recipe, though: add about 3/4 cup of almonds to the machine with a little water and grind to a paste. 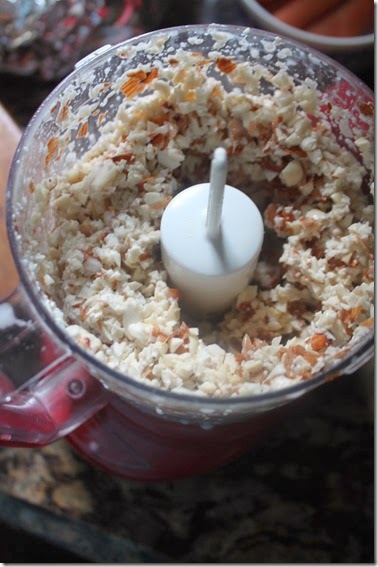 Add about 3/4 cup more water to the paste and keep pulsing the machine.  You will start to see, it’s making a milk out of the almonds and water~ 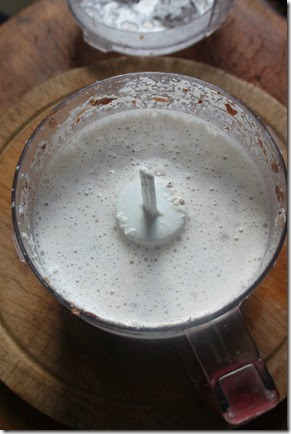 Pour this mixture into the lined bowl; this is to strain out the solids from the milk.  Work in batches until you have processed all of the almonds.  Depending on how concentrated you want to make your almond milk, add more or less water to your batch.  I find I like about three cups of water added to the almonds.  Move the mixture around in the bowl a little with a spoon to let the milk drain from the solids, into the bowl below. 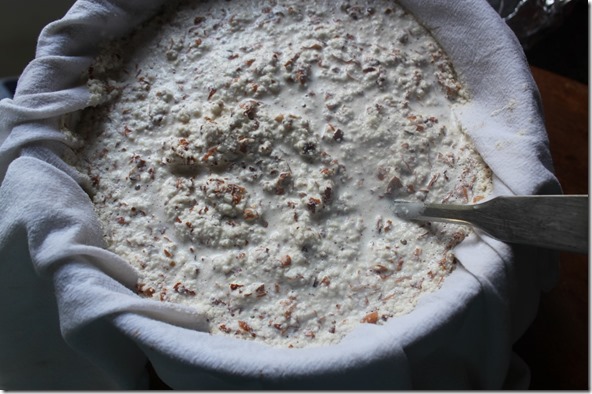 Gather up the corners of the dishtowel and slowly squeeze out the milk from the solids; twist the cloth, with the solids inside, like this~ 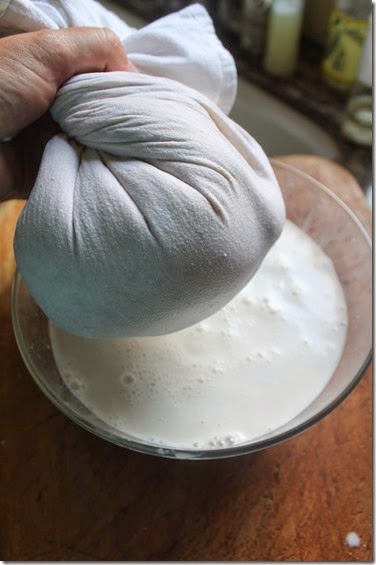 Congratulations!  Now you have a lovely bowl of non-dairy “milk.” 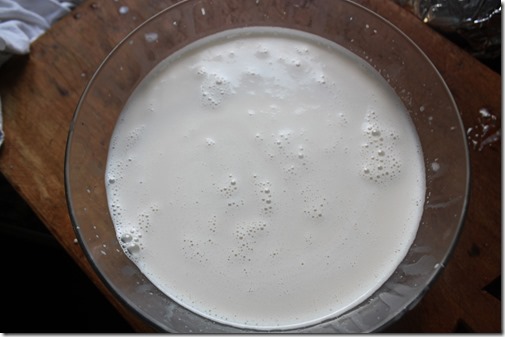 Did you know that Almond has recently passed Soy as the best selling nut milk?  Look for it at the grocery store, but note that they often add cane sugar, gum and other ingredients.  Look for a brand that has just almonds and water, or try to make your own.  And it does taste just like almonds, unless you want to add ground or stick cinnamon, chocolate, or vanilla extract.  All of those make great flavorings, especially in a glass of warm almond milk; here it is with a dash of cinnamon~ 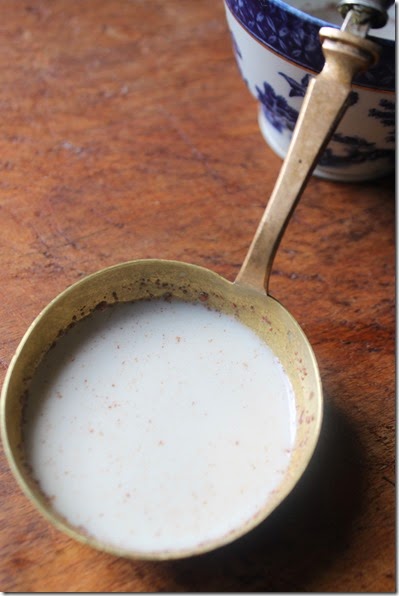 I ended up with a 1 litre bottle of almond milk for the fridge, and another cup for the soup I’m going to make.  Almond milk is great in coffee; I love the delicate flavor and non-dairy aspect, and it will also froth up perfectly just like cow’s milk for your morning cappuccino.  I don’t particularly like the taste of soy milk, but I love that of almond milk~ 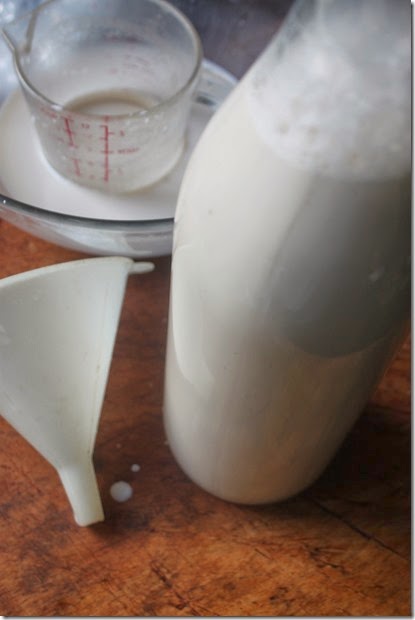 Now, as for that ball of stuff you have in the dishtowel, this is another benefit to making your own vs buying the milk; this is almond fiber; you can call it almond meal.  In some cases this can be processed a second time to make a weaker milk, but I just put it on a cookie sheet in a 200 degree oven in a few batches. 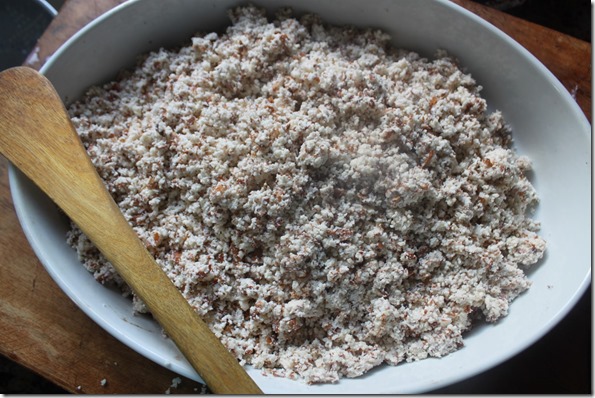 At 200 degrees it’s dry but not browned; I’ll call it semi-raw, but it goes into the next batch of Dad’s granola, so he gets almond taste and fiber.  You can also use this instead of flour for some cakes, especially in a gluten-free flourless chocolate cake.  If you haven’t seen the recipe I showed before, go HERE.  The cake is even better with homemade almond meal.  Really good…. 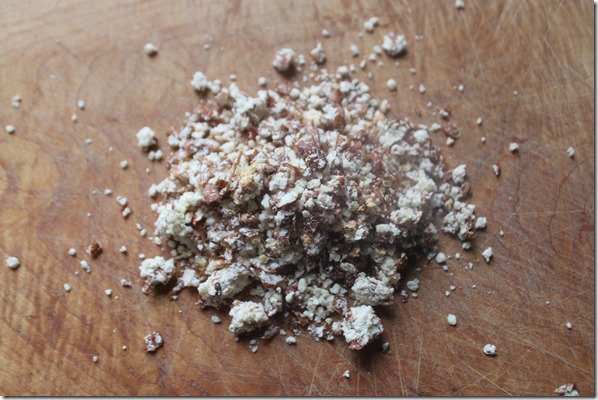 Almond milk figures into some of the oldest French recipes, including one of the 13 traditional Provençal Christmas dishes and a mix of white mush called Blanc-mange, which is white rice, white chicken and almond milk.  But now since it’s Friday and Lent, we are having no meat tonight; it’s fish and soup.  For my Middle Ages Soup you will need about a cup of almond milk and a large slice of squash or pumpkin.  I used a slice of my favorite Musquee de Provence that I got at the market last Saturday.  Remove the seeds but not the skin, and drizzle with a tablespoon of olive oil.  Wrap in foil, and bake at 350 until fork tender, about 30 minutes.  Let cool and scoop out the flesh. 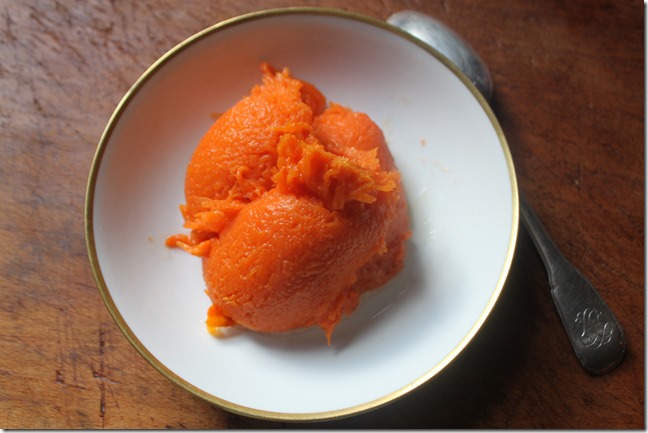 Puree the cooked pumpkin with the almond milk in a blender or mini-prep until smooth; season with salt and white pepper; also add a little extra spice according to what you have on hand: think of nutmeg, clove, or quatre-epices aka Allspice.  Heat on low; sprinkle fresh herbs or nuts on top; we will enjoy this with a fat slice of pain Poilane tonight. 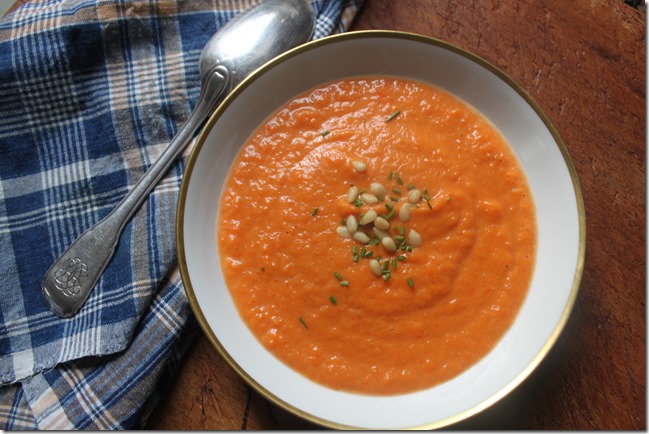 I like this soup for its unusual taste; it’s hard to identify the flavor as almond, but it’s there.  The soup is also dairy-free.  And guaranteed to be a topic of conversation for your dinner as you explain how to make almond milk and why this soup can be called Middle Ages Soup.  Enjoy~