My annual trip to Paris got off to a great start with a friend setting me up with a first class non-stop ticket.  It’s going to be tough to go to the back of the bus next time, but I sure did enjoy those seats which truly to recline flat.  I have spent the last three nights in Laguna, San Francisco and on the plane sleeping with one eye open.  Last night, here in Paris, was my first real night of sleep.  If you travel to Paris from the States, I highly recommend that you power through your first day and do not fall victim to the siren’s call of your hotel room bed.  Resist the temptation, and walk walk walk.  Even if you are tired, you can still walk.  You will thank yourself for the rest of your trip as you will hopefully adjust to the time difference, especially those of us traveling from the West Coast.

Everyone is different, I know, and so do as you want, but just think of all the goodness there is to see.  Do you want to sleep through the day, or do you want to see small coin pouches in the shape of toads which come in ten colors as well as five shades of metallic?  I presume these are not real toads, but they do cost about $400 each.  Paris will hit you squarely in the head with new ideas and inspiration. 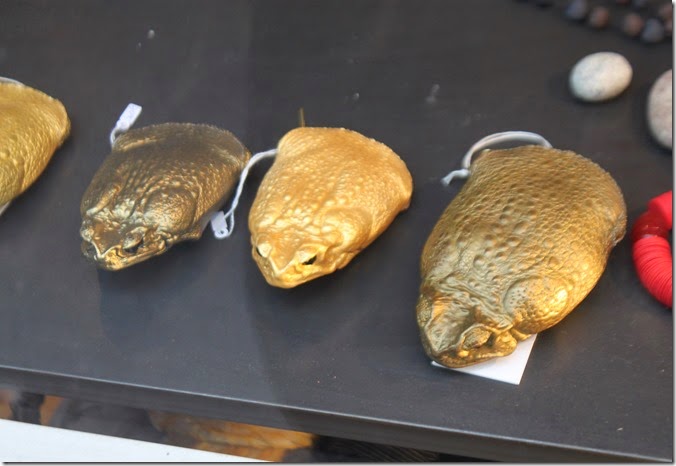 I took the RER in from Charles de Gaulle airport this morning.  As the hostage situation nearby had taken place, there was one –yes, one- woman on the train with me into Paris.  Her daughter was in lockdown at a school five minutes from the hostage location, and she was on her way to work.  There was an air of unease for both of us as normally the train would be packed.  Personne. Anyway, I hate to arrive and learn of a hostage situation this way, but she and I chatted the whole way in; the train skipped every stop and went right to Gare du Nord.  There was an erie calm on the train, though several Parisian friends had said that the day before, a day of observance for the twelve Charlie Hebdo massacre victims, was also extremely quiet in Paris, with few people on the streets and in the Metro.  Many people just left the city for a long weekend as the two terrorists were on the loose.  I reasoned that I should avoid large crowded areas, but was sure that I would not run into any terrorists at Dehillerin.  And so I dropped my bag at the apartment and off I went.  I picked up some supplies for my cooking classes, such as trussing needles and pastry scrapers marked Paris and a handful of my favorite wooden spatulas, marked for this address. 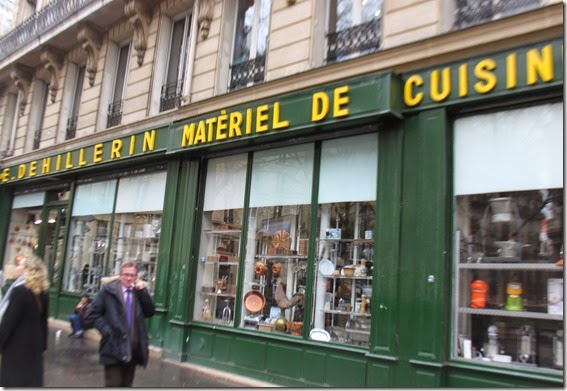 The area where I stay is full of some of the most gorgeous shops in Paris, and I look forward to seeing all that there is to see.  This favorite shop has all neutrals this time, and on the back wall is the most enormous coral mirror I have ever seen.  Magnificent. 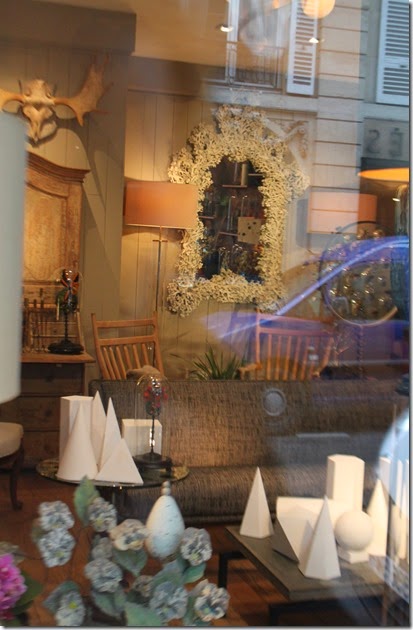 Just steps away are two of my favorite florists in the world.  A heavy painted iron urn planted simply but against a wall of malachite-like wall paper.  A feast for my eyes~ 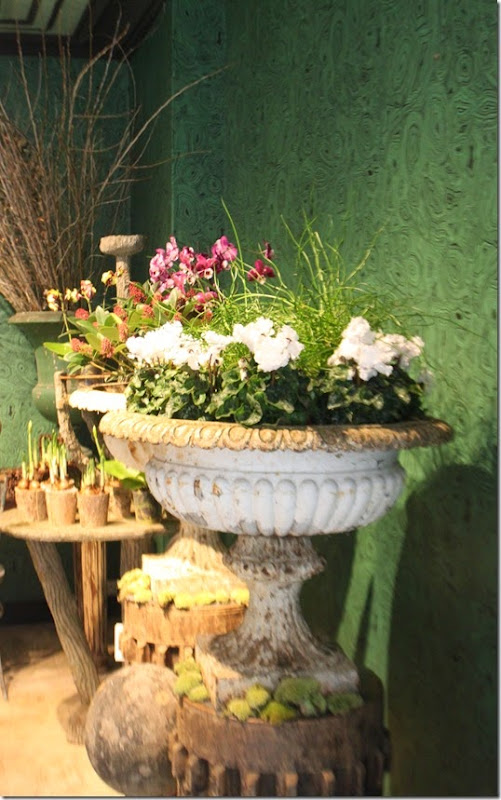 A arrangement of crates and flowers was nearby at the other shop; with a large bucket of mimosa on a simple chair.  OK the big Parisian door and cobblestones don’t hurt the photo, I know~ 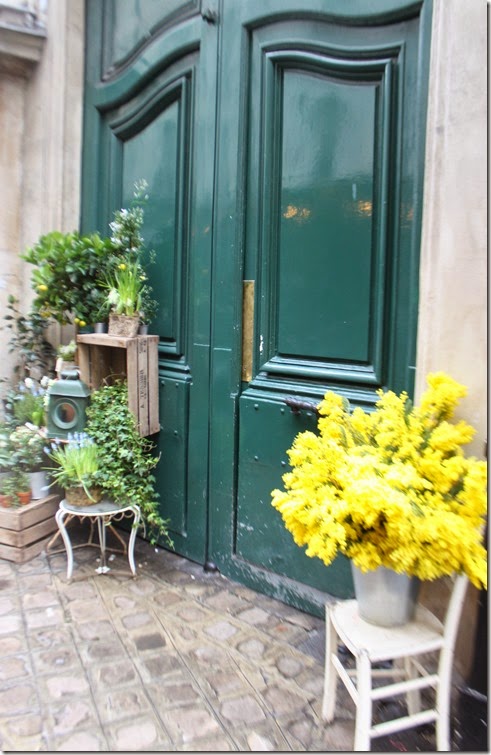 Just across the street, a small grocery offers a selection of exotic fruit just inside the door.  Do not sleep, walk!!! 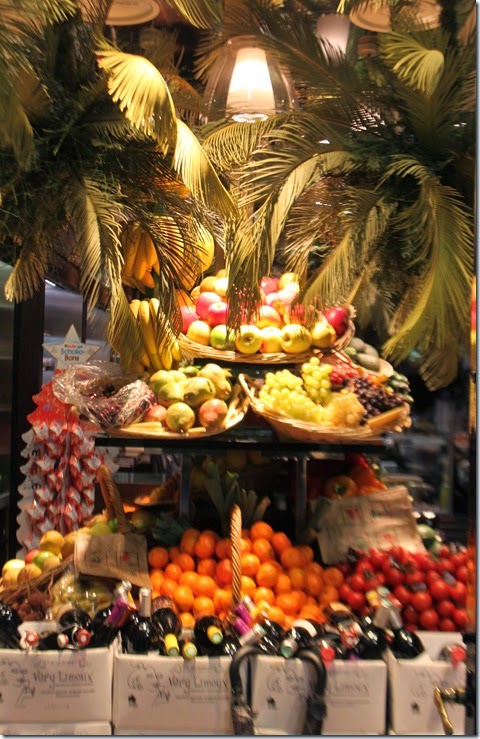 Further along, at yet another florist, were a few signs that we are just finishing Christmas here.  Enormous concrete planters filled with boughs of fir.  With white lilies in front of course.  Welcome to Paris. 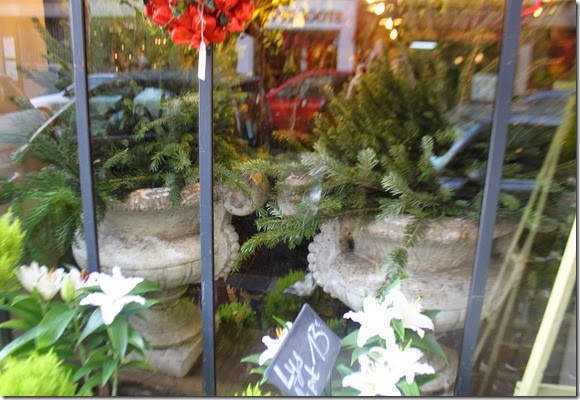 There were cut paperwhites and anemone from the sough of France. 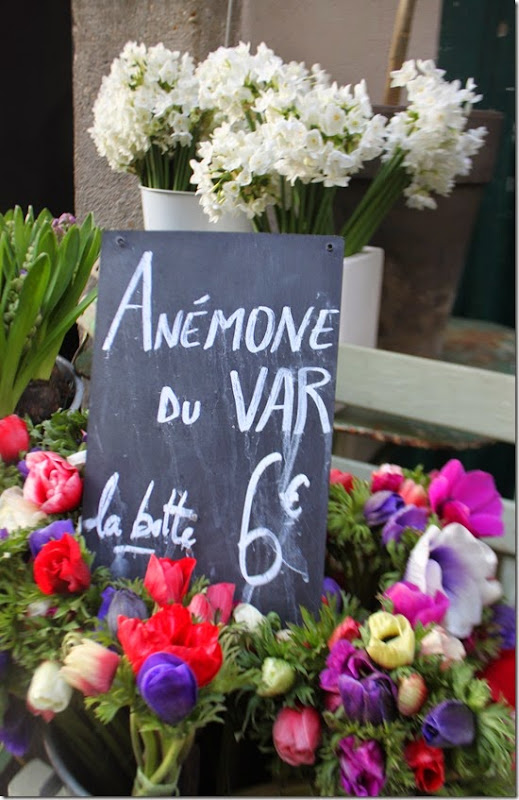 After several hours of errands and walking, I was ready for a stop.  There are plenty of places for tea in Paris, but I like the Laduree not far from the apartment, on rue Jacob in the former digs of Madeleine Castaing.  I had the thé Josephine with a pitcher of hot water on the side and found a newspaper another patron had left behind.  A quiet corner to rest my feet with the silver pot of tea was well worth the 7 euros while catching up on the events of the two days before. 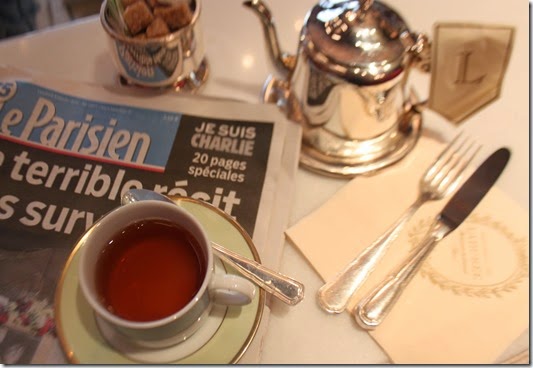 Back to walking, on my way over to hit a few more stores, a waiter was on a smoke break outside of Vuitton and just around the corner from Café du Flore.  Ah, Paris…. 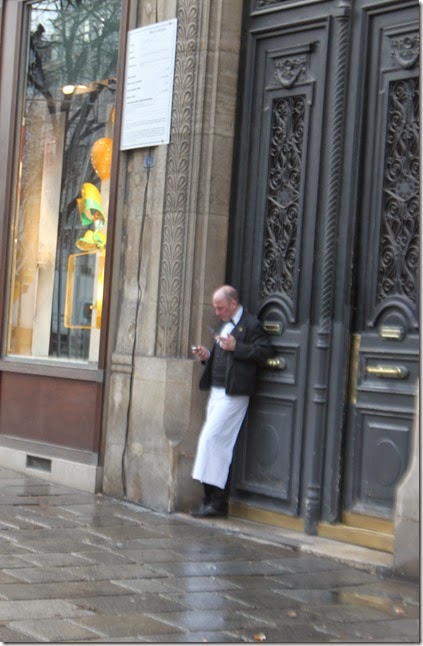 There were mostly tourists out on the streets, though many shoppers looked to be taking advantage of the January sales.  I can tell it has been calm the last few days because there were still so many Epiphany cakes still on offer; the traditional end to the Christmas season is January 8, the feast of the Three Kings.  You get a crown with each cake and whoever finds the little favor in each cake gets to wear the crown. 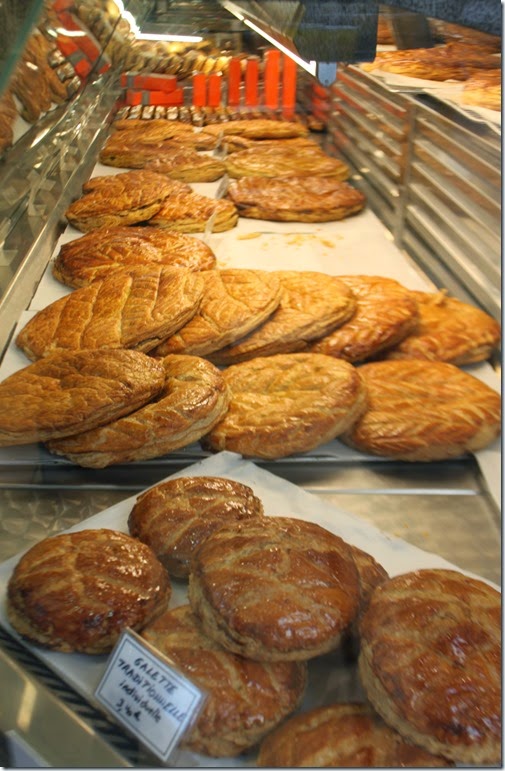 As I headed back towards the apartment, I passed the usual places.  It’s nice to see the same shops. 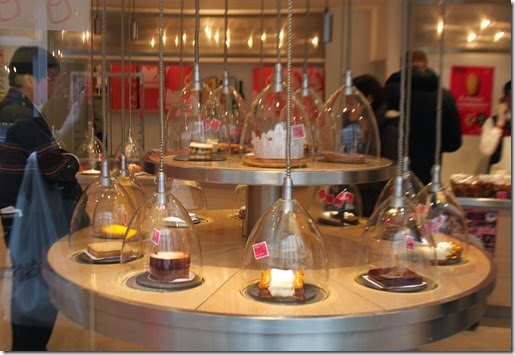 Though sometimes the shops change.  This is the Chapon chocolate store, below.  You have seen the image of their large vintage-copper-cauldron-pendant lights on Pinterest as well as their back wall composed of old chocolate molds.  Why did they get rid of the copper lights and add the canned lighting?  Was someone tired of cleaning copper?  The shop has lost much of its soul with the renovation, in my opinion.  I hardly recognized it and it’s far less inviting now. 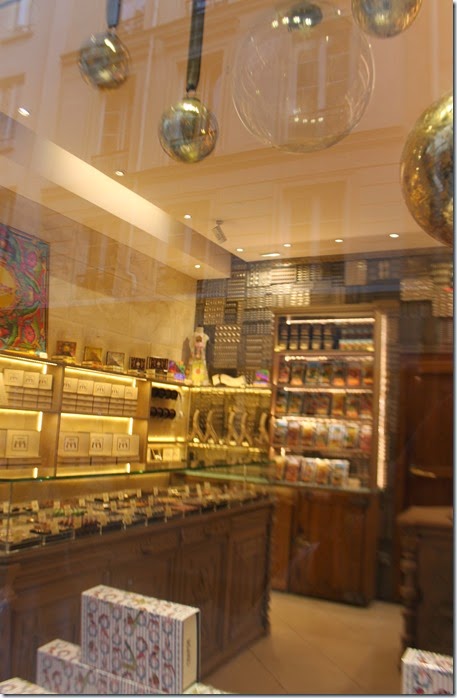 As the day wound down, I cruised the banks of the Seine.  Oui, more walking.  This the Assemblée Nationale and well, the lady in the background there doesn’t need an intro…. 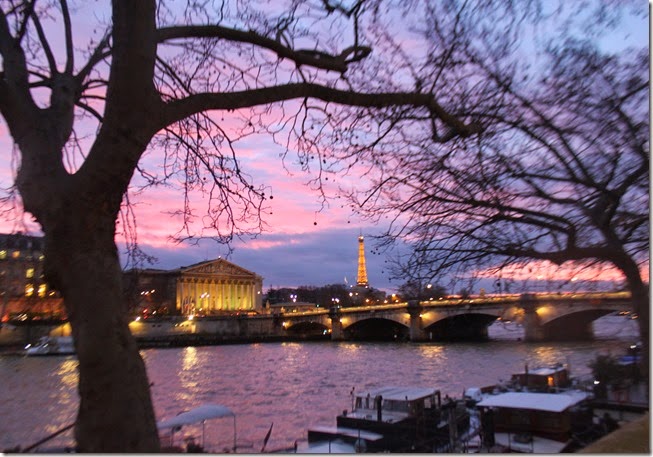 The lighting changed as I walked towards her.  I didn’t have the energy to walk all the way there, as my ballet-slippered feet were at this time telling me it was best to get home. 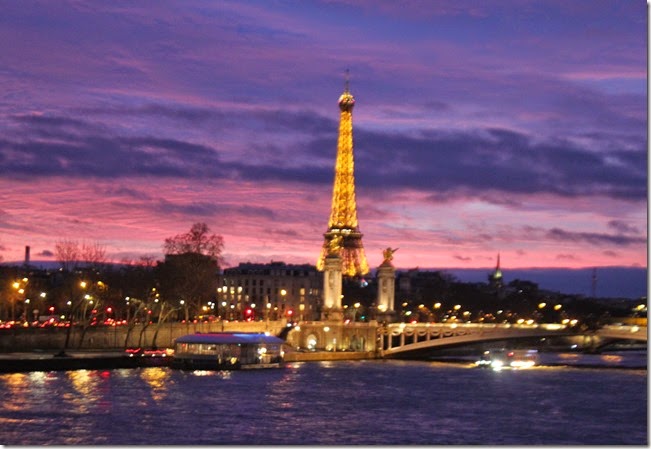 The river and the bridges and the feathery clouds of the winter sky.  It’s great to be in Paris, even if my camera is giving me a few focus problems!~ 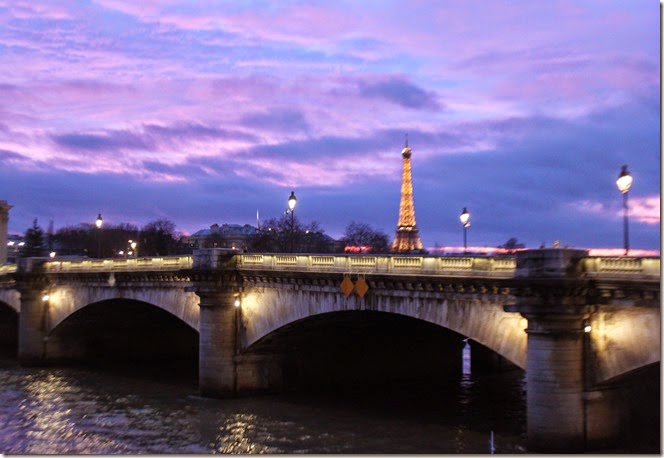 Give yourself just a few hours tromp around and take in all the sights of Paris….you will rejuvenate~ 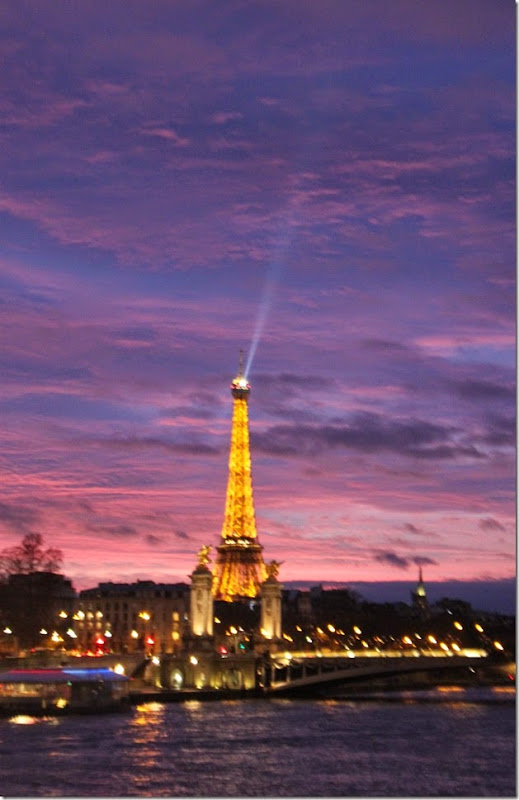 The Great Wheel is still there outside of the Tuilleries at Concorde.  Must love Paris…. 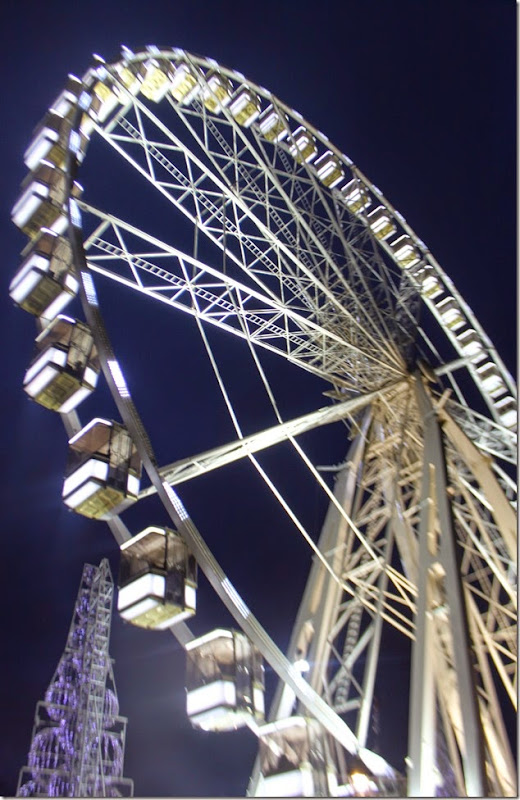 Arriving home to some pain Poilane, cheeses and such and a bottle of wine, I caught the last of the day’s news, the killing of the terrorists, and President Hollande speaking.  Wow, what a day, and I wonder what tomorrow will bring.  Hollande has called for Sunday to be a day of great manifestations across France, especially here in Paris.  I will be heading to Morocco that afternoon, but will try to see what happens in the morning.  Meanwhile, I finished the day the same way every first day in France ends, with a cold foot bath loaded with French sea salt.  Your feet will be refreshed and not swollen the next day.  No hot water, cold.   I swear by this.

The only thing I didn’t get sorted out my first day was the internet connection, which has been changed, so I’m going to write now and post when I get online.  But it is now Saturday here in Paris, and I’m up at six am with coffee and readying myself to go to the President Wilson market to shop for food for dinner and then swing by the flea to see what I can see.  And then, later today, to find a free wifi connection.