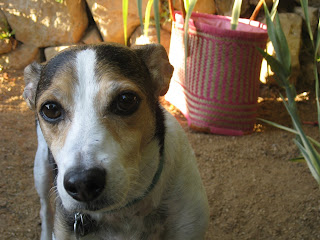 I was getting ready to post about retail in Laguna. Man, I guess it’s a tough industry; I wanted to post that it’s "dog eat dog." I contacted a few local retailers about carrying the baskets, but they didn’t even respond. No “good luck,” no “thanks but no thanks.” I mean nothing. I guess I'm Old School, but still, I don’t take it personally; maybe they don’t think the line fits enough with their stores. I still have other retailers in town to see. There’s one retailer who thinks she might place an order this fall; she knows who she is and she’s a total class act.
Meanwhile, I have been giving out freebies to some of the nice people in my life who help me out; one of them is Monica, who takes such good care of Napoleon at the kennel. She insisted on paying me for a petite Antibes; then called me later to say one of the guys wanted to buy one for his mother, so I went back and left a few, so he could choose. A client came in to the kennel, saw the baskets, and wants to buy 50, “for Christmas.” That's what I call a Serendipity Sale.
Ironic, isn’t it, that I can’t get a Laguna retailer to even respond, when someone who sees two samples want to buy 50 of them? But then I got to thinking, maybe this is all working out OK....I have a few other things up my sleeve that I'm working on in Laguna to get the word out.
This is not a great photo of Napoleon. His ears aren't up because I was trying to make him get in or sit next to the pink basket and he wasn't going to have any of it.