After the dinner party last weekend, it took me a few days to get through the rest of the dishes and glasses.  Everything I use for a party is hand-wash, and after a cooking class for 6-8 I can seriously get through all the dishes in an hour.  But for this party, even though my awesome guests got through most of the plates and cooking pots the night of, there was just a lot of mess, a lot of dishes.  We used cups and plates for appetizers, plates for the entrée, for dinner, and for salad and multiple dessert plates for everyone.  Lots of plates and dishes!  I talked to a friend today and we agreed I am somewhere between  the laid-back California girl and the laissez-faire French-shrug Francophile.  Honestly, if you get upset that there are few night-before dishes left over the next day, you need to refocus.  I mean, who can worry about dishes when there are fantabulous guests to talk to, herbal tea and lattes, Chopin and Strauss to listen to, and these adorable faces to look at~ 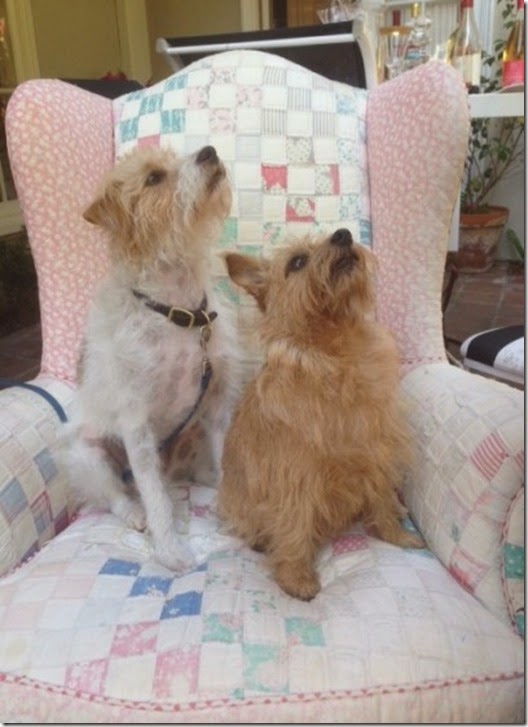 Photo, which I adore, by Lorie via La Contessa of Vintage Hen House.  Seriously, look at those faces?  In between tea and coffee and brioche French toast, we fed the dogs bacon and snapped IG photos.  Forget the dishes~~FORGET them!  Thankfully, none of my guests had a care….we were all about spending time with each other and enjoying the moment.

Anyway, several days later, it was time to get to the business of putting everything back in the cupboard.  This is how the dining room looked. 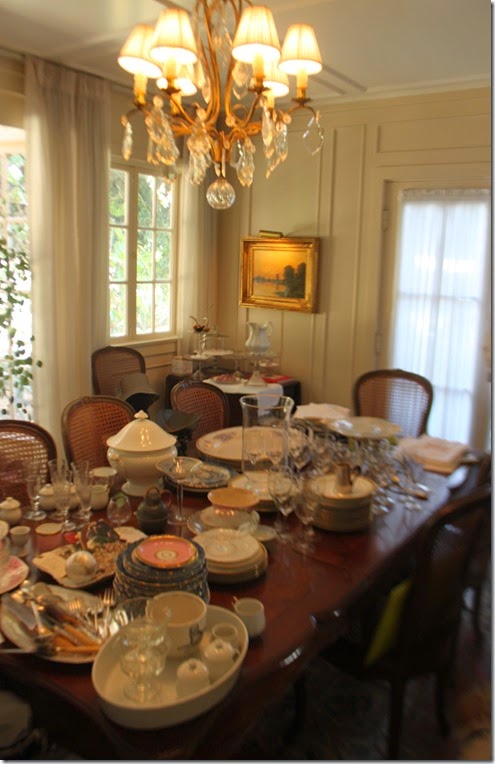 A few of the dishes had made it back into the cupboard; this is the finer stuff, not the everyday dishes, which are in the kitchen, and the buffet holds still other stuff that gets used rarely.  But it’s definitely time to reorganize this space. 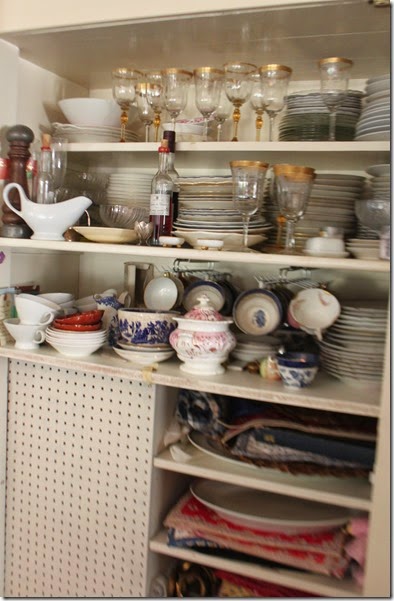 A short time later, everything was out of the cupboard, and on the table, on the floor and in the hall.  China galore.  It’s good for me to do this once a year or so, because sets and like-pieces get separated, and this is time to put it back properly. 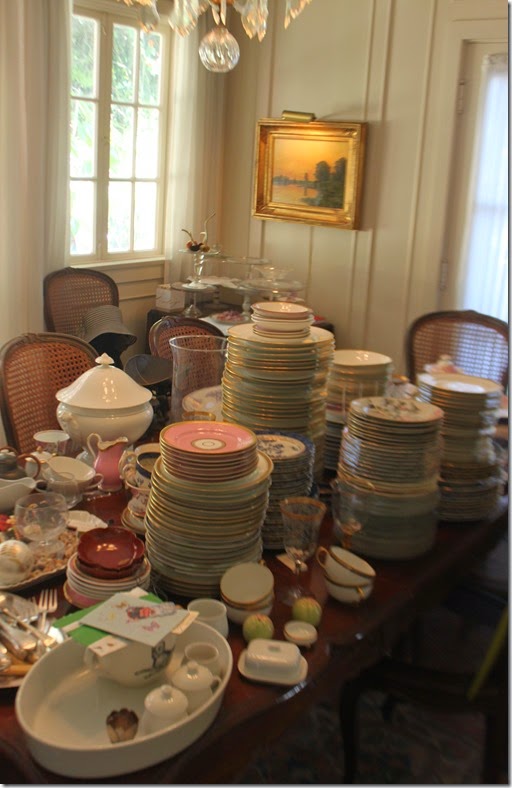 I have purged various pieces over the years, and added others.  Sometimes I regret getting rid of my collection of Wedgewood and English pieces from London and New York, but that’s water under the bridge.  I have ended up with a set of dishes that are mostly French, with a little English and little Japanese added in.  Oh, and some nice American glass pieces and a lot of teacups that were wedding gifts that belonged to each of my Grandmothers.  We used many of those this last weekend at dinner; it’s like having my Nana and Grandma come to my dinner; they would approve. 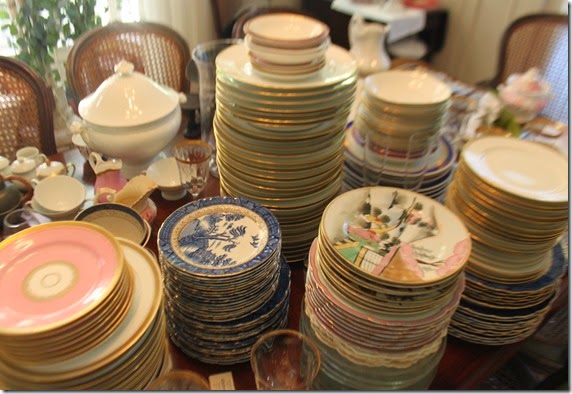 God it looks like a lot though, towers of plates.  It’s ok though, I’m ready for dinner for fifty. When we gonna do that?  Oh, maybe next spring….dishes, check.  Glassware, check….. I can never have enough white Limoges with simple or fancy gold rims.  I can change the look of a dinner in so many other ways, but the food always looks awesome on a clean white plate.  But I need smaller plates, for appetizers and salads and desserts, so…..um, I just need lots and lots and lots of plates, what can I say? 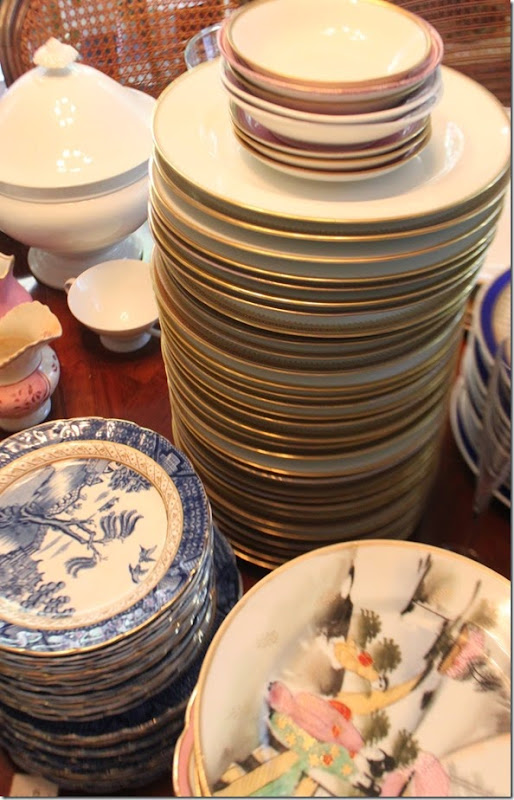 One of my guests said she had never seen so many plates in all her life.  OUI!  But I love and use it all, so isn’t that ok? I’m not really asking for approval, it’s me.  I have a rule, if you use it all, it’s ok, and all of this gets used.  There is the occasional attrition, but I don’t mind that.  An excuse to buy more…. 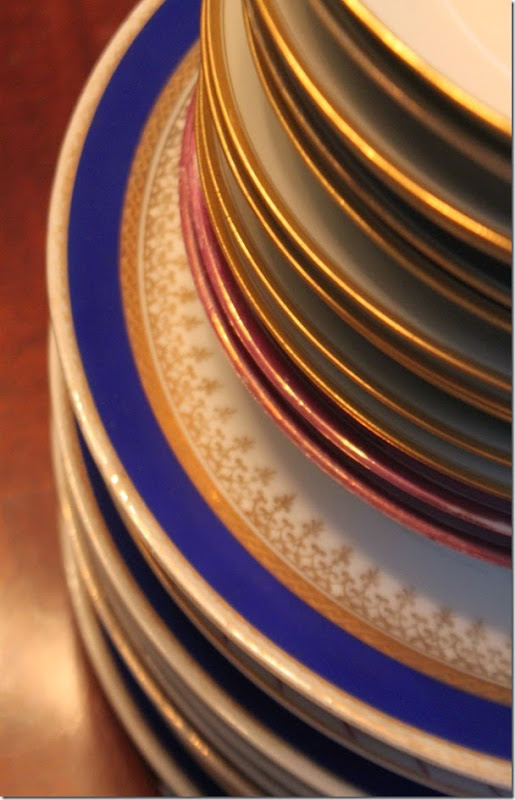 Elsewhere in the cupboard are various small pieces….the small pink slipper shoe belonged to my Grandma; though it looks French, it’s marked Made in Germany.  I don’t get what these sweet little show pieces are about, but maybe someone can explain it to me.  The small pitchers and teacups are used constantly, as we love tea and brunch in this family, and then use them for soup or desserts or whatever…. 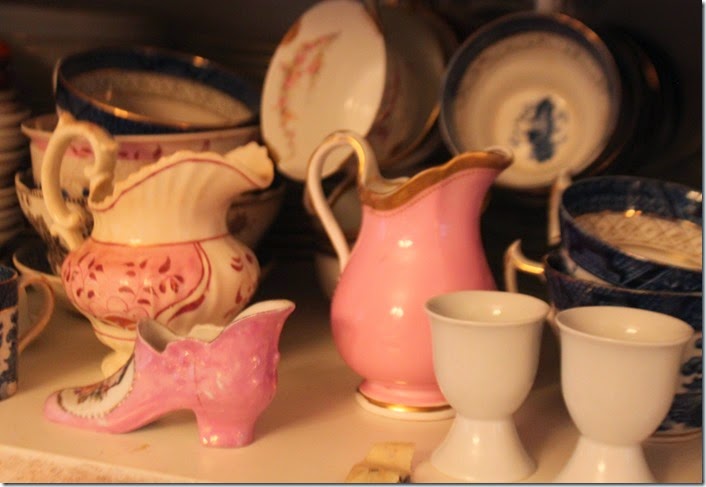 I have the top three shelves done; next up, the linens and other items below. 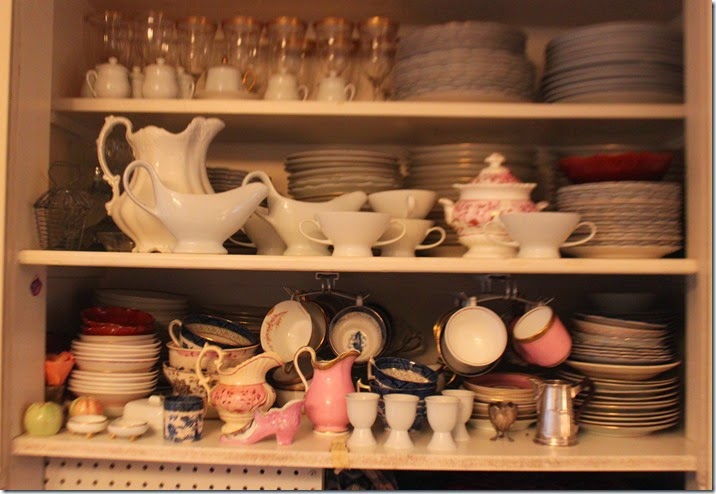 The small pieces are layered in front,high-low from French sterling to $1 egg cups. 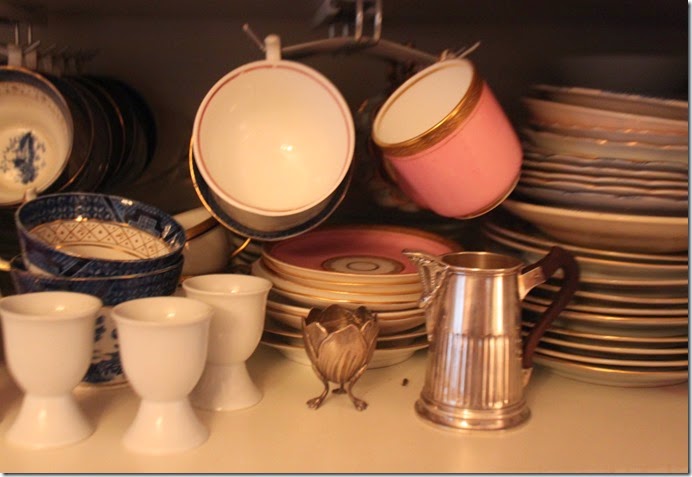 At the end of the day, here is the finished cupboard….I am happy! 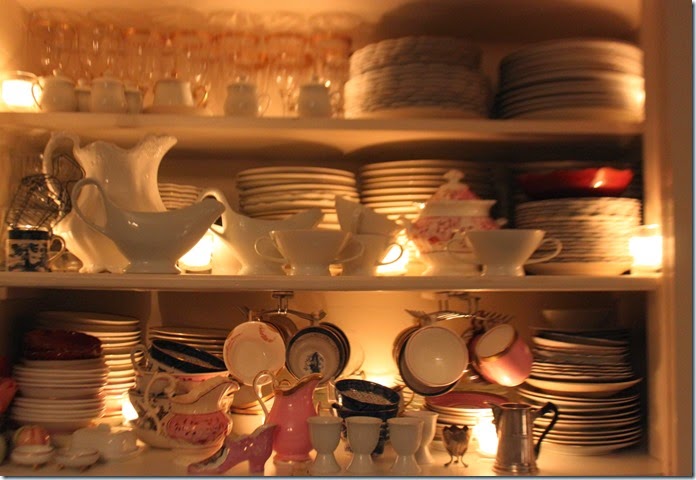 Now, on to the next cabinet!