On Sunday at the market, Kevin from Kawano Farm offered me a deal I couldn’t refuse.  An entire flat of strawberries…for $2. “Day-old,” he said.  I have been holding out for some of the really small French-style berries from Sage Mountain, but of course I snapped up the flat from Kevin.  I’ve been to their farm and seen these berries growing…they are really good… 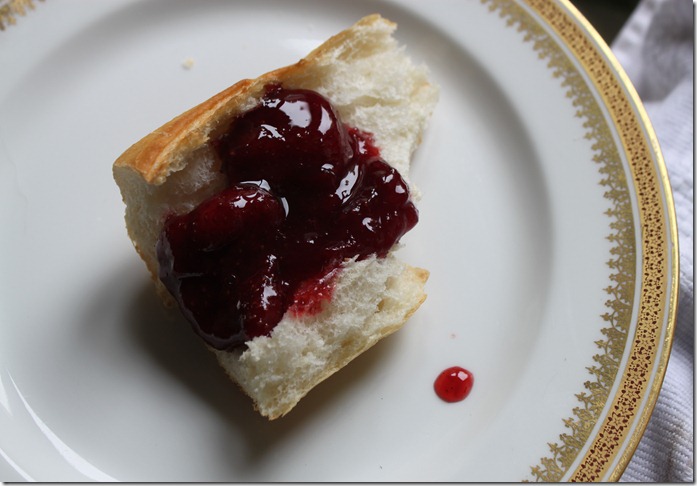 I saved a few baskets for eating, but got to work Sunday evening on a pot of strawberry preserves.  While I love the taste of the smaller berries, the medium-large ones we get in California also make a a great preserve because the berries hold their shape quite well when cooked. 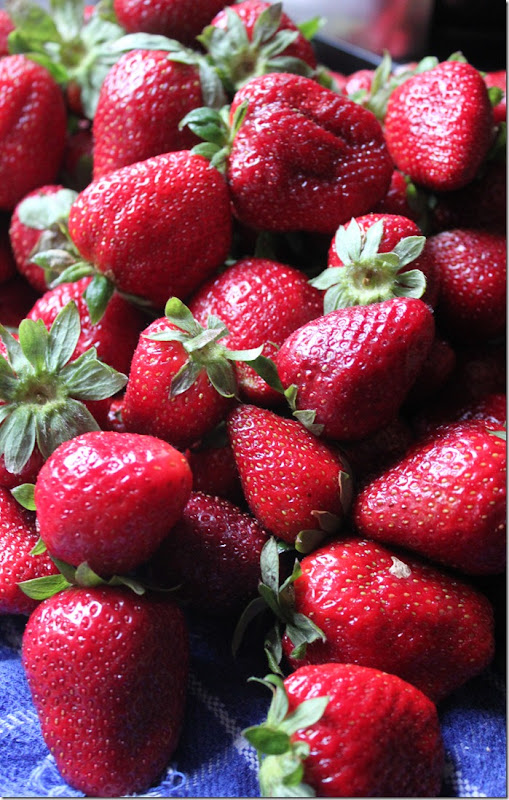 When I lived in Paris, I spent many weekends at the country home of some friends outside of the city.  The house was run by Sylvienne, who resided on site as gardienne.  She also did all of the cooking single-handedly, preparing one marvelous and hearty meal after the other during each of our visits.  The large kitchen was her domain, and she darted around preparing all this food.  She would shoo us out of the kitchen if we came to help, but one day I did ask her if she could recommend a good cookbook.  She produced this book, and told me it would be the only cookbook I would ever need~ 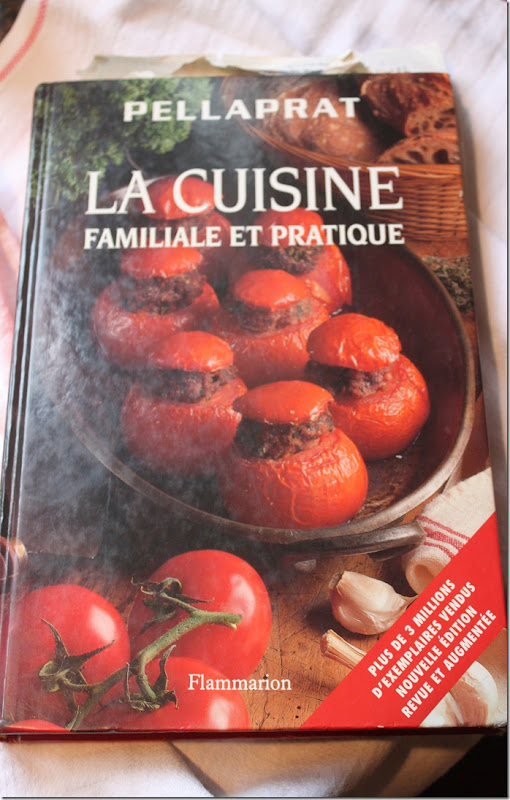 If you follow my blog a little you know that I am a fan of French cooking and especially Julia Child. But if you have her cookbooks, you will notice Julia doesn’t do confitures or other seemingly basic French recipes; MTAoFC is generally more elevated cuisine though there are some overlaps.  Interestingly, Henri Pellaprat, the author of this cookbook, was a founder of the Cordon Bleu, where Julia learned to cook.  I also have an original edition 1936 copy, which contains even more text than the one above that I bought in Paris shortly after Sylvienne’s recommendation almost 20 years ago~ 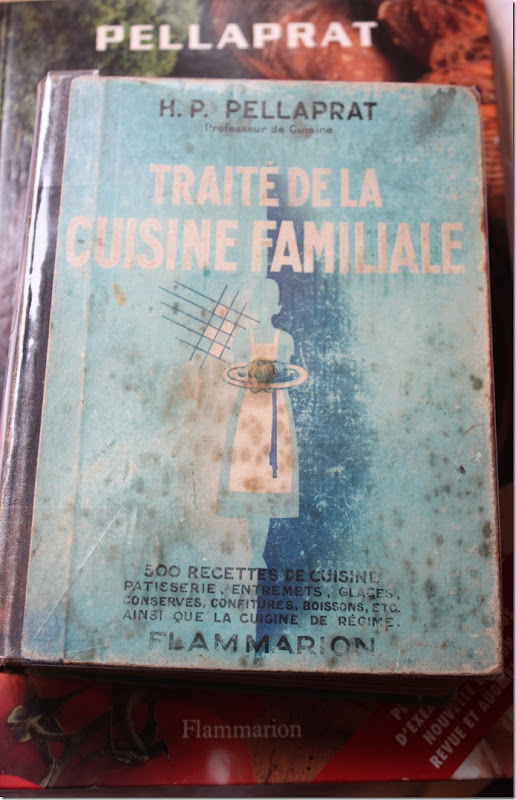 So this is what I sometimes refer to as my “Old” French Cookbook.  The recipes are generally very simple and sometimes rely on proportions rather than exact measurements.  This is the cookbook I use for all my confiture recipes.  Ready?  Here we go.  You need berries and sugar and a little water, that’s it.  Strawberry preserves take less sugar than some other recipes and marmelades.  Start with one kilo or about two heaping cups of sugar~ 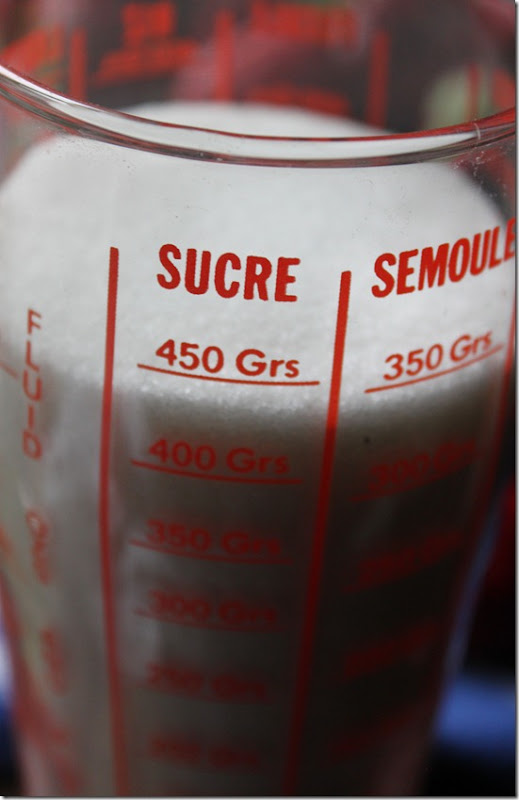 Put the sugar in a large casserole or bassine a confiture if you are so lucky to own one (this will be my next purchase from Guy!).  Add just enough water to start the sugar melting.  I use half a cup of water; the recipe is forgiving and so it doesn’t really matter how little or how much water you use, as I will explain later~ 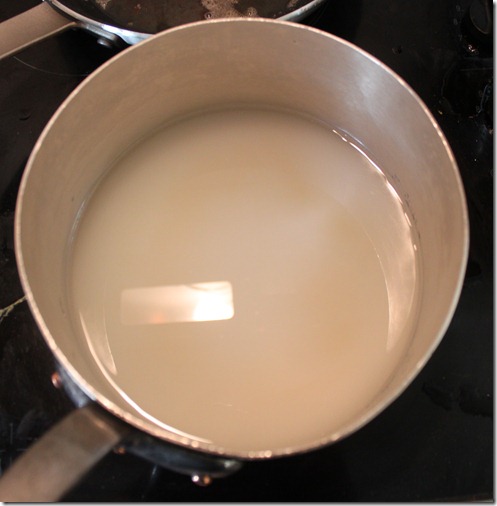 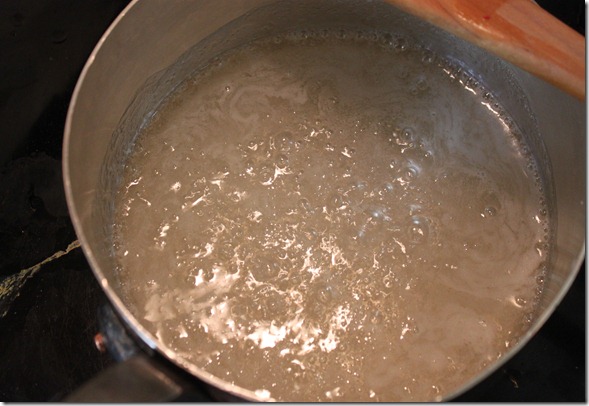 Wash and tip your berries while the sugar begins to cook.  A rule of thumb for strawberry preserves is twice the weight of berries as sugar.  In this case I used 2+ cups or two pounds of sugar and about six baskets of berries~ 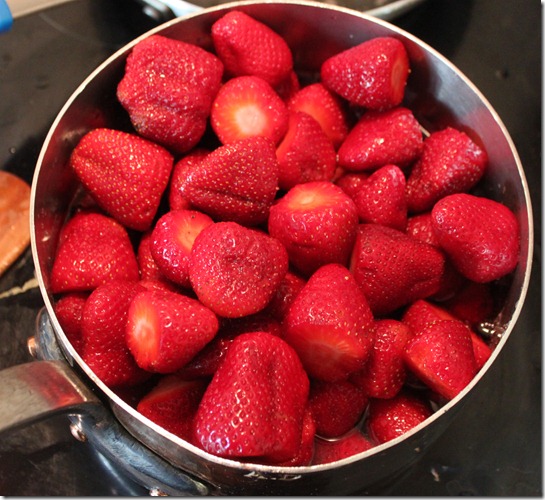 Drop the berries in the syrup and turn the heat down very low.  At first the syrup will not cover the berries; that’s ok.  The syrup will pull the water and the juice (not to mention the color) from the berries.  Stir occasionally and gently; I do not mash the berries but leave them whole.  Keep the heat very low and do not let the mixture boil. 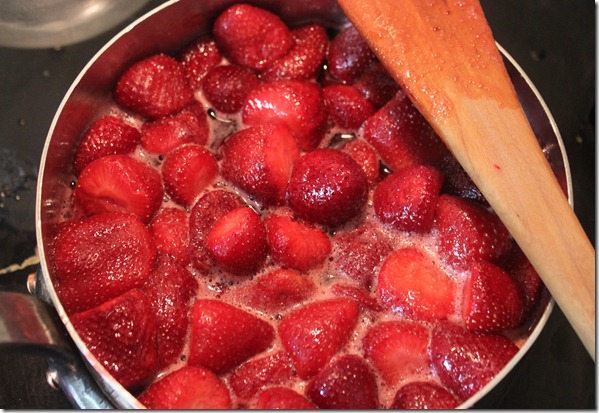 When the berries have given up most of their juice, use a skimmer to lift the berries out of the pot.  If the berries are small, this can be in ten or fifteen minutes.  In the case of these larger berries, it is about half an hour. 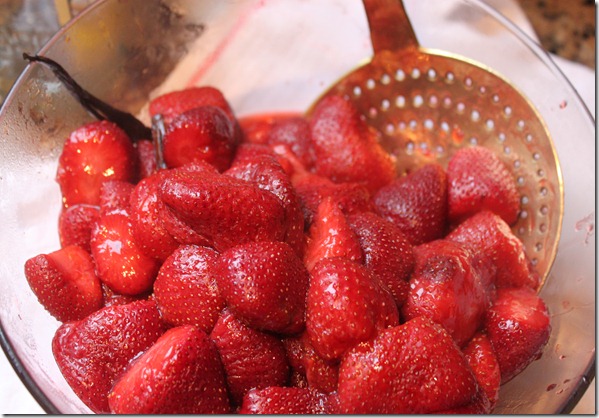 Turn the heat back up and boil the syrup down in volume.  You want to thicken the sauce that will go with the preserved berries in the jar. 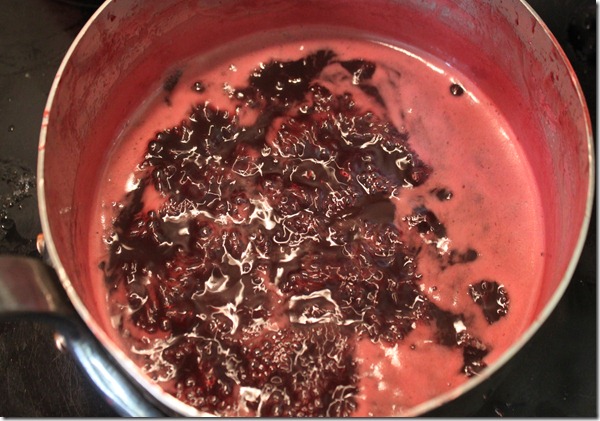 After the volume of the syrup has been reduced and the syrup is thickening up, drop the berries back in the syrup and turn the heat off.  Let sit for about twenty minutes.  Then skim the berries again into a separate bowl and boil the syrup down further.  Remember when I said don’t worry if you have more or less water?  If you needed more water to cover the berries you can just boil it off at this stage. 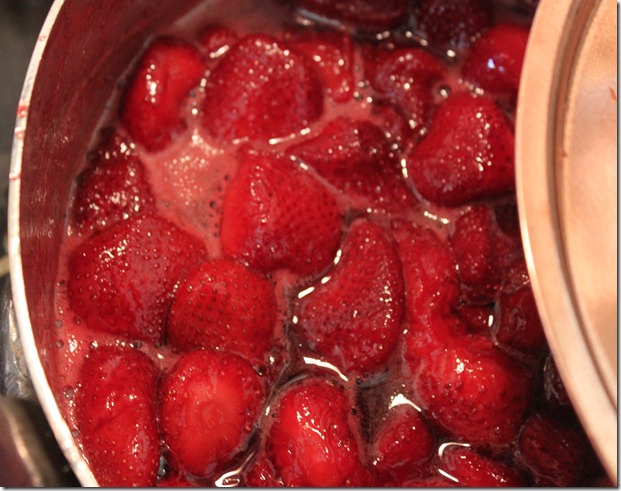 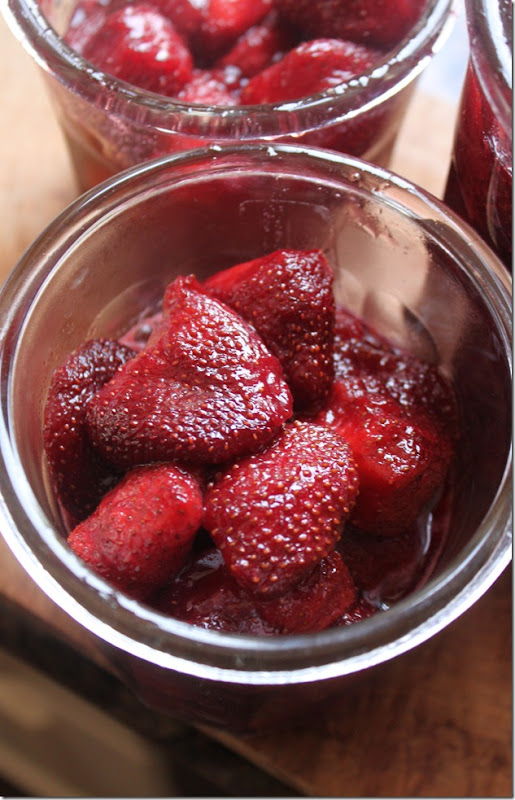 You can boil the syrup again to make it as thick or thin as you want; when it gets to looking like this, it will be pretty thick when it has cooled in the jar.  Be careful not to let it boil over~ 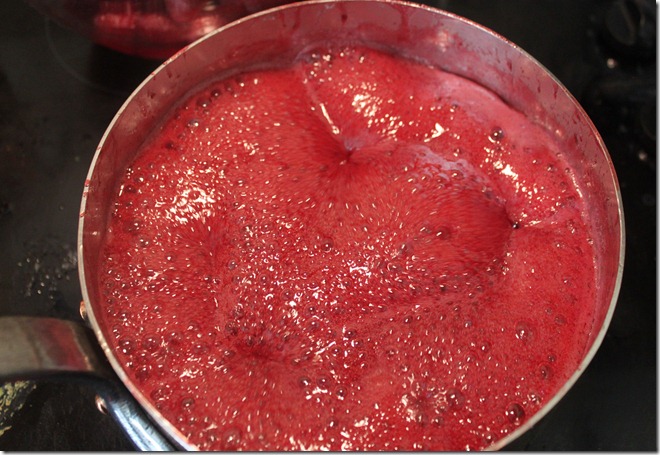 You are probably wondering why I don’t have a finished photo of the trio of jars.  Well, actually I left them in the cooking pot overnight and filled these three jars with the warm jam on Monday morning while I went to get a baguette.  The pots had not even cooled before my parents consumed the entire baguette and one small pot of jam for breakfast.  For dessert Monday night, they had a second pot, over ice cream. 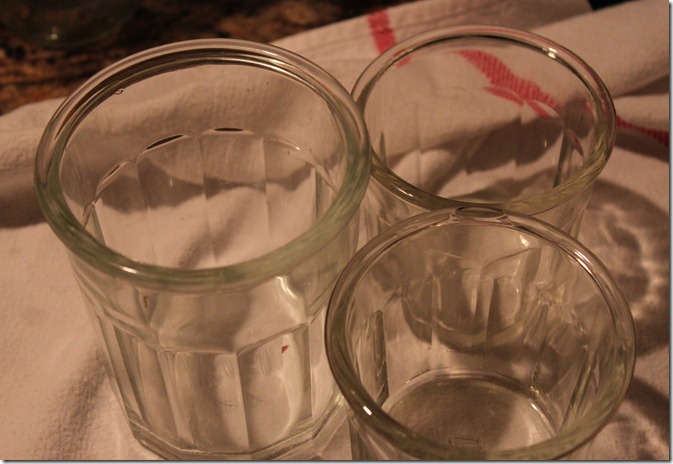 Today is Tuesday and they had most of the third pot with another baguette this morning, with my father eating the last of the whole berries with a spoon out of the jar.  Today I made a second batch of jam with the rest of the berries, and they again had a pot for dessert with ice cream tonight, and Mom has now asked for more pots for her Mother’s Day brunch.  Dad says that was pretty good, but “Isn’t it just about cherry season now?”

OK, not bad as I made the equivalent of eight pots of jam for 25 cents each + the cost of sugar, but I seriously doubt that all that sugar is good for my parents!  Tomorrow I will see Kevin again but think I will probably hold off on getting another bargain flat of berries…

By the way you will notice none of these jars have lids.  You can cover them French-style with just a little plastic wrap and keep them in the cupboard.  You can also use the classic Ball or LeParfait jars if you like.

Tomorrow morning I will see if I can add a pic of the finished jars.  The jam is delicious and not like anything store-bought, and the color is very pretty, so this makes a great gift if you can manage the time to make it….