Setting Up Shop at Remnants of the Past

We arrived in San Luis Obispo to set up shop for the Remnants of the Past show on Friday afternoon.  It’s always fun to set up a booth like this as you start from scratch using what you have planned and what you have brought.  Once you have done this a few times it’s not difficult, but in the end it always ends up being a question of whim and instinct.  I brought crates, knowing the back wall would be all crates.  I brought the 100 ft string of globe lights, the same ones I use under the loggia in Laguna that you have seen many times before.  I knew they would go somewhere, around the top, on a frame or whatever.  Booths need light and interest.  There was no framing between booths so I had the idea to run the cord through all of the crate handles, and we added the bulbs after that.  I stressed Laura out a little by doing this, as we were short on time, but I think she knew it was worth it, in the end.  We created a series of lighted vignettes...

The overall booth looked sort of like this, at the start. 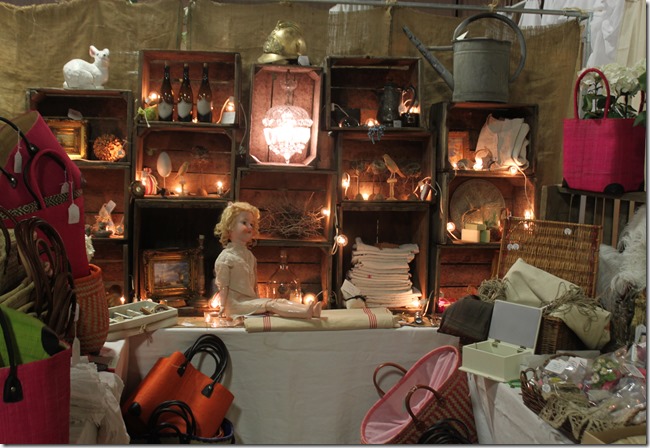 and as we sold items, the booth evolves and items shift.  Baskets went to the top, as did the angel. 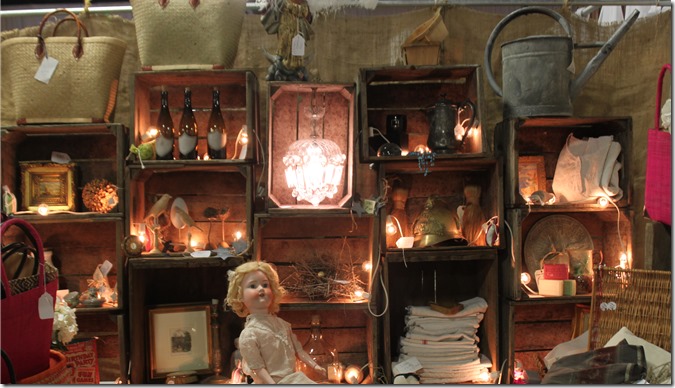 In the central top crate was a chandelier.  It was effective as a focal point and it sold the fixture.  This pic is a little off center; the fixture itself was centered in the crate.  Below it was the large nest, which later held a large white pearl hat pin in place of an egg. 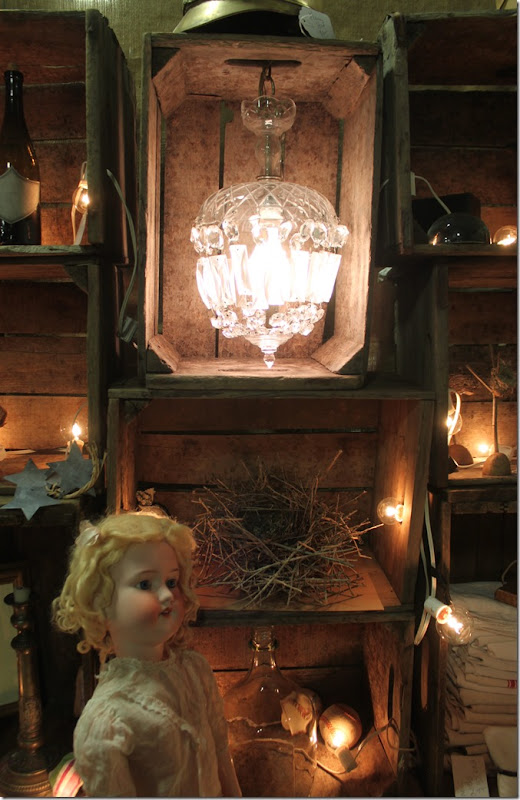 We coordinated colors and textures in each crate; here an old garden sundial and French soaps with Laura’s sweet Majolica pitcher~ 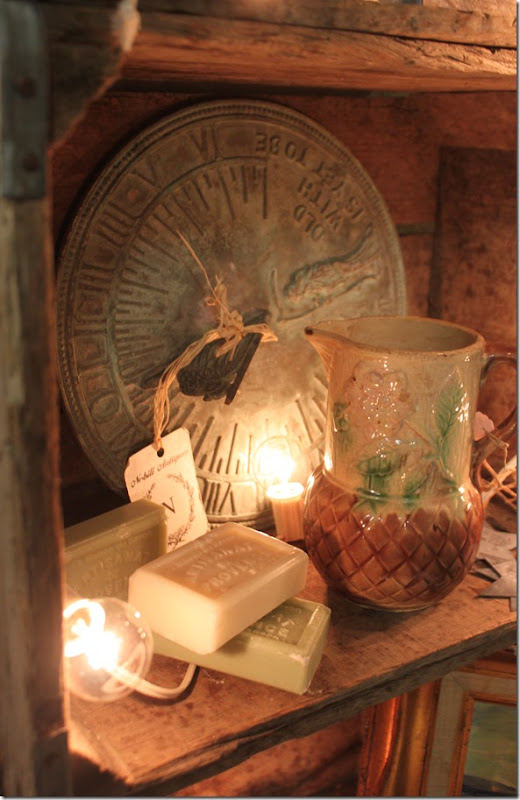 Whites such as the hydrangeas and milk jug and baby shoes paired well with the light on the wooden crates and natural fibers of the hemp tassels. 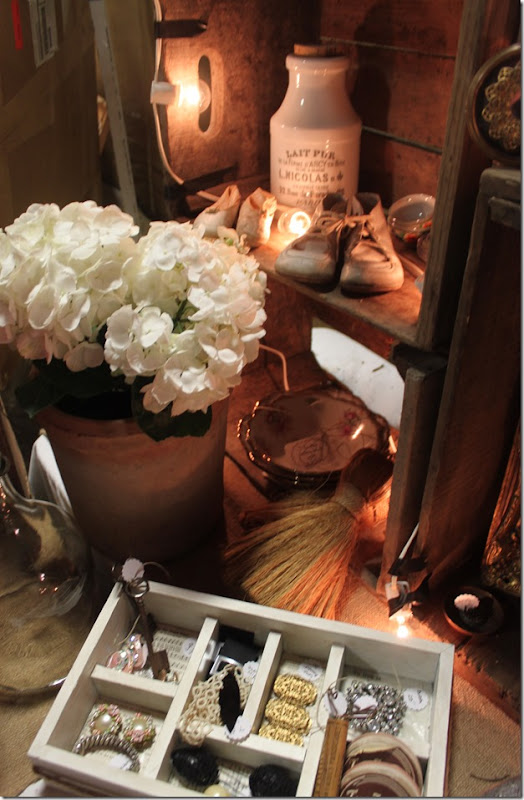 The pair of doors made into the screen were at the right of the booth entry; all the garden stuff sold, except the doors, which came home with me.  Dozens of people commented on the marionettes, and I had a few people who wanted to buy one or two, but I said no, and they all came home with me. 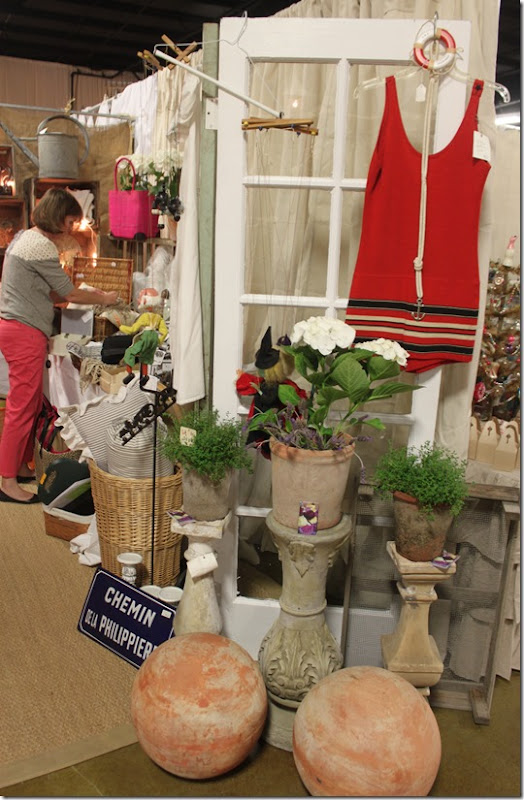 On the table below the chandelier I placed a German-made Armand Marseille doll; these were made from 1885-1930.  Mom’s Grandmother won this doll in a raffle, and gave it to my Mom when she was very young.  Mom resents that she was never allowed to play with the doll, but that also means that she is perfect.  If she were American I would call her Sally, but she is German, I’m guessing the company was from Alsace, as it was in Germany but with a French name.  So I am considering a good French name.  Any ideas, seeing her sweet little face? 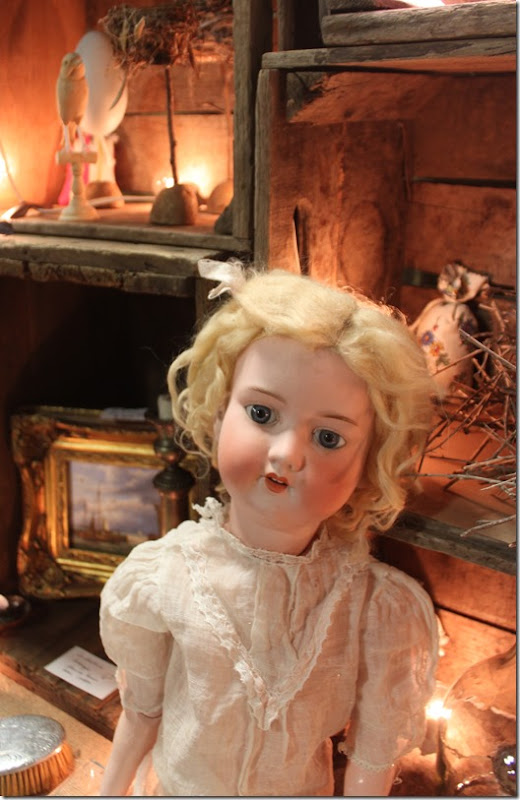 She has pretty little blonde curls in her hair and her original muslin dress.  Jointed knees and shoulders.  Though Mom wants her to find a new home I am not so sure.  My Biscuit dog saw her sitting in the wing chair Thursday night and woofed…it looks like a real little person…woof woof woof….Biscuit finally met the biscuit-headed doll.  Everyone is friends now. 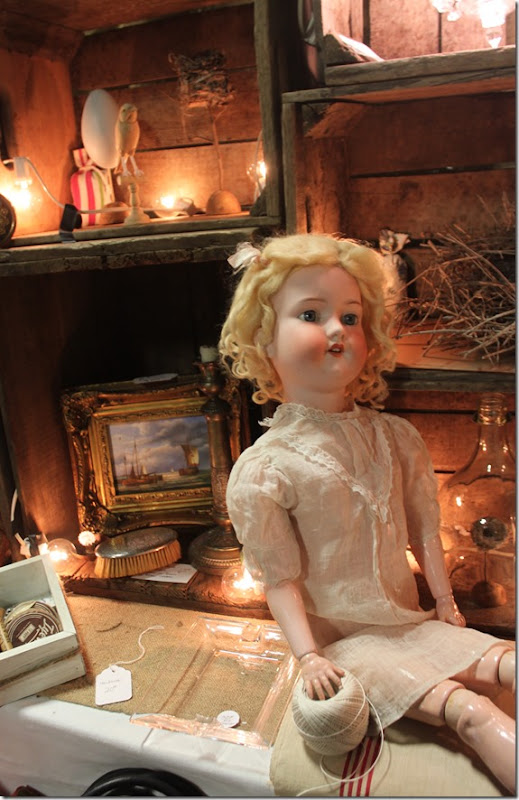 I sold almost all of the bird’s nests, and the potato holders were marvelled at by the shoppers. 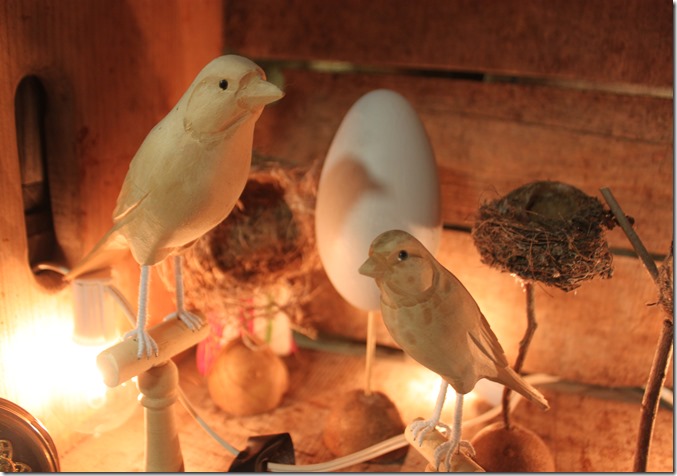 The warm wood of the crates and the lights made nice scenes. 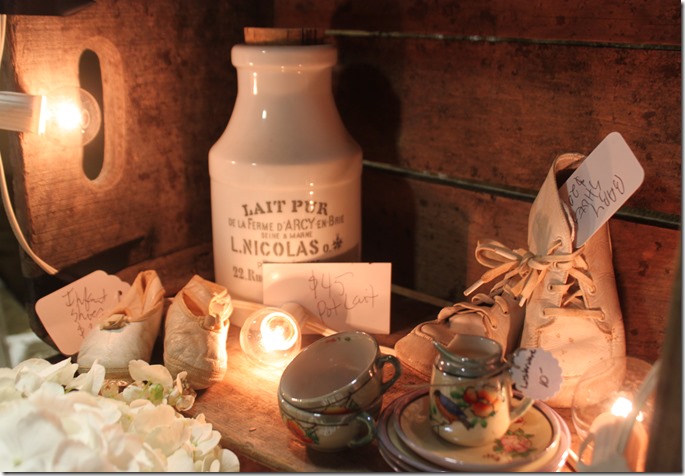 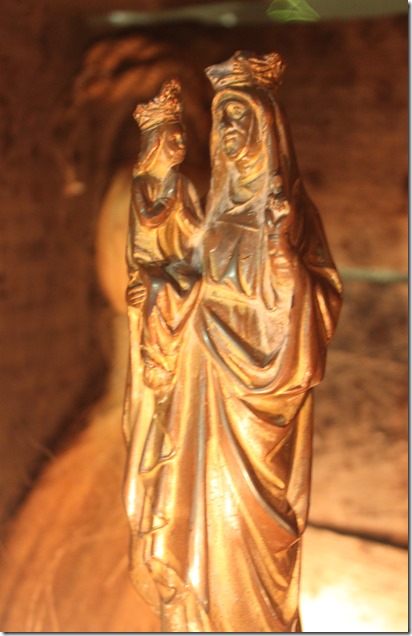 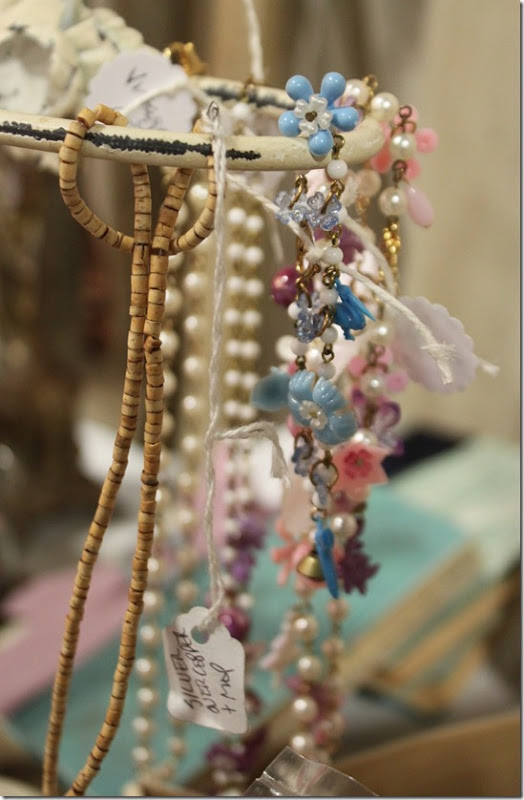 We had many small sewing notions that sold well; 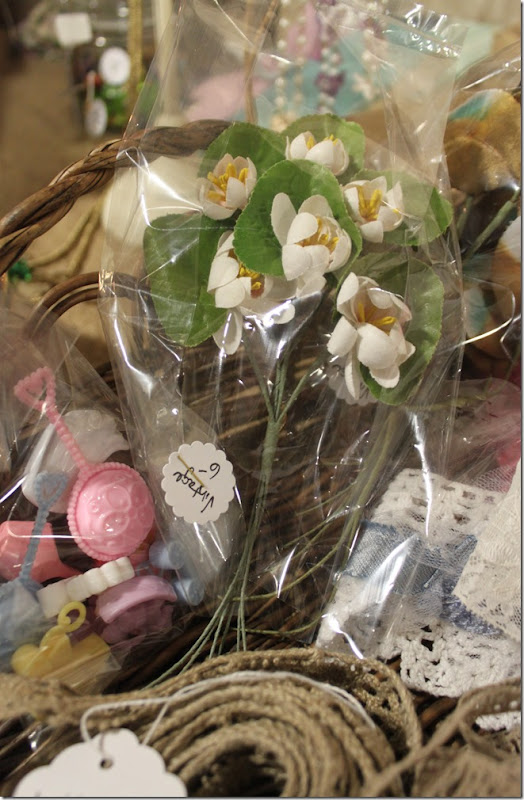 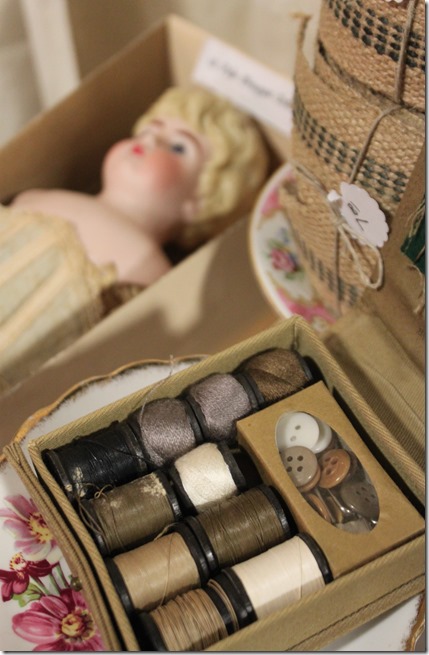 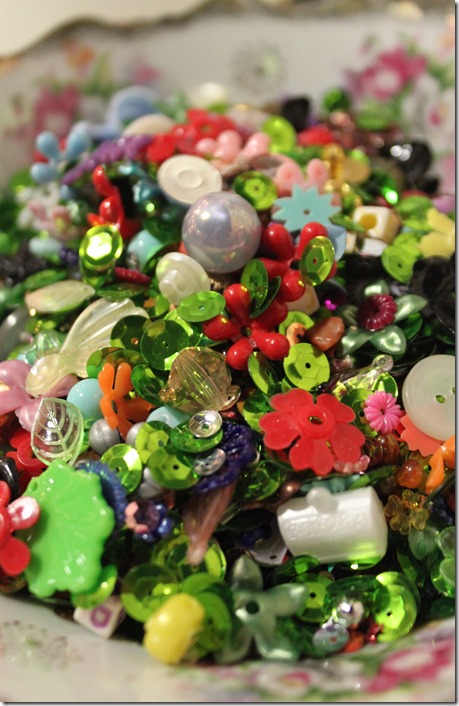 And what is always best about a show like this is that objects get re-appropriated to their rightful owners instead of sitting in the basement.  My French fireman’s helmet went from neglected in our garage to the collection of a Sacramento Fireman. 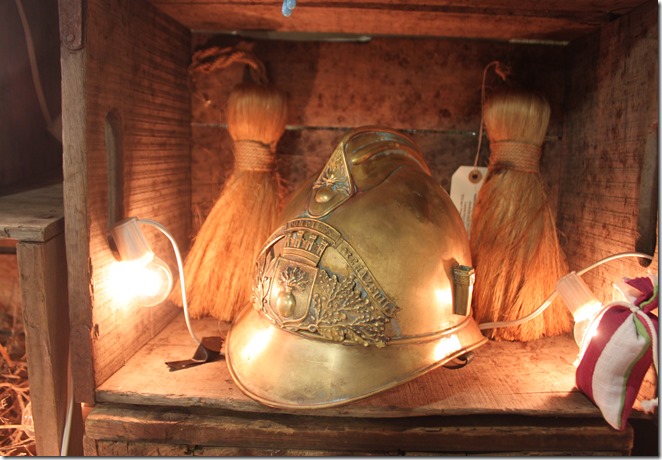 The all-wool swimsuit went to a man in the San Luis Obispo area who is obsessed with Gatsby and will swim in this in the sea daily.  Really.  He has a 28 inch waist and so this 29 or 30 inch belt will hang nicely on his hips as it should. He’s says he’s going rock it at the beach in a suit like this. 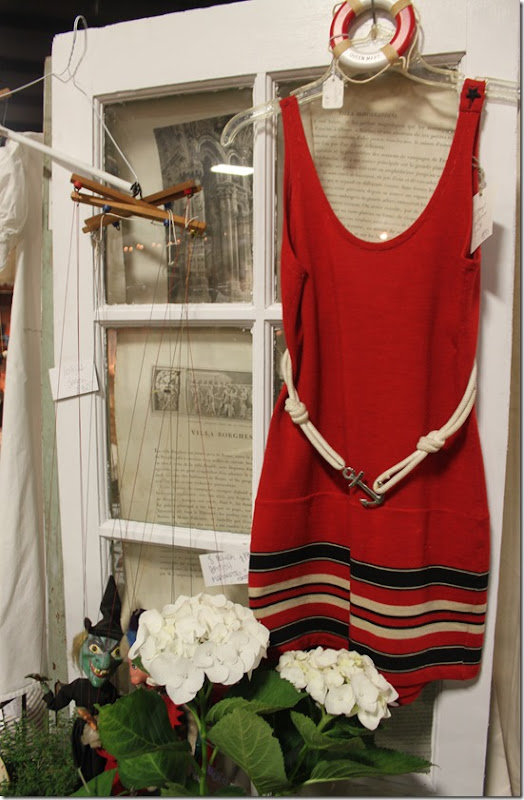 We had a grand time and can’t recommend this show enough.  It’s a wonderful change of scenery and a high quality show.  The November show will feature Rachel Ashwell of Shabby Chic fame and will be very well attended.