If you are into food and plan to visit Rome in this lifetime, the current issue of Town & Country Magazine (Stephanie Seymour on the cover) has a fantastic article about where and what to eat in the Eternal City. My eyes lingered on a phrase in the copy along the lines of “the French look at ingredients and think what they could become, while the Italians cook to let the produce itself shine.”

I’ll take some issue with that statement; I think the author had Michelin-starred French restaurants in mind, which are indeed an experience.  But there are many French dishes and restaurants that show off produce and livestock to exception; I will show you a few in Burgundy next month.  But it is true the Italian cuisine is a little apart for its unique incorporation of local ingredients and fresh produce, and reliance on some important ingredients like tomatoes.

This weekend, with our only brother in town, my sister and I agreed to have dinner at her house, and after our recent visit to Italy, decided on an Italian-themed evening.  Why not a little pasta and steak and green white and red for table  flowers, would be easy, right? 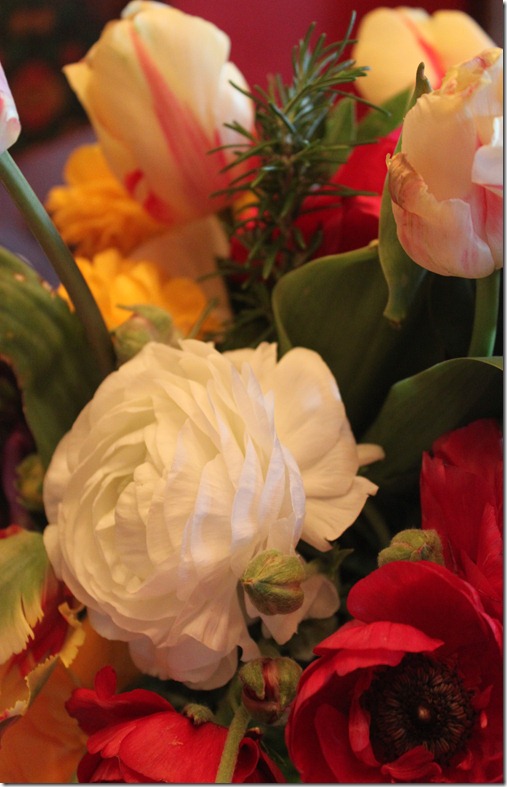 For the table flowers, I composed almost-blown roses, freesia, camellia, rosemary and bay leaf from the garden, the herbs being charming reminders of Tuscany and Rome; bay leaf aids in digestion in addition to it’s wonderful flavor.   Parrot tulips and ranunculus from my friend Hector at Corona del Mar market rounded it out~ 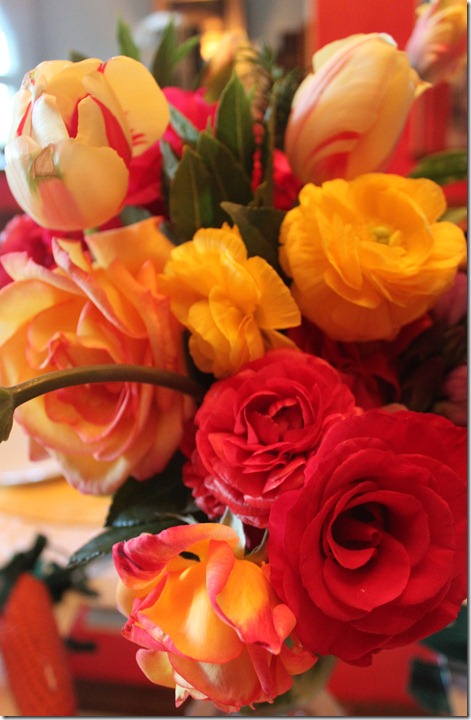 We had a planned menu: appetizers, first plate (home made pasta), second plate (meat and seafood), salad and dessert.  Wouldn’t it be nice, I mused, if we ate truly Italian style?   Go for a walk before dinner (ok that was a stretch), plate each course, take our time, for once, not hoover through dinner?  Here I am guilty of romantic daydreaming, of my family lingering over their food, savoring each morsel and having a luxuriously perfect meal. We talked about the idea of plating each course for the table of twelve, but she responded vaguely.  I call us the Feed Bag Family.  Belly up to the trough and let them mow.  I know that sounds a little mean, but it’s how we eat.  Still, Sis and I agreed to try for a paced meal.

But then started the troubles….everyone was late.  Errands to run, things to do, hubby’s home late, phone calls and texts….blah blah blah….if you have followed my blog you know my family always promises to help cook but is generally 2+ hours behind schedule.  And today was no exception.  No worries, I wasn’t going to let it upset me.  With the assistance of my niece, I continued to prep and cook, after a lot of prep the last two days.

The bruschetta was toasted sourdough batard brushed with garlic olive oil and topped with red vine ripened and yellow heirlooms from Valdivia Farms (Corona del Mar market).  A few pieces of toasted garlic and a dusting of sea salt and fresh ground pepper added to each; this was fantastic…..two trays got set out on the bar, along with a selection of French and Italian cheeses. 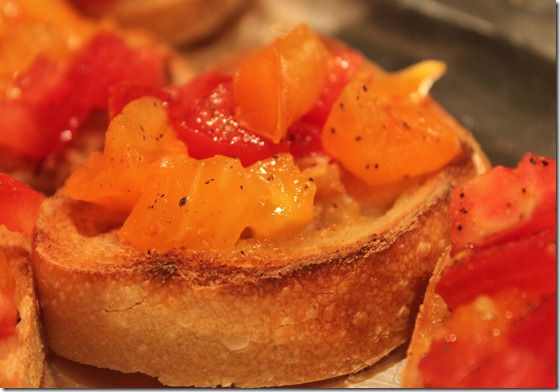 Like a single person doing crowd control, it quickly got out of hand.   The bar crowd was looking for more food, so I used the XL shrimp that was going to be part of the second plate; sauteed quickly with fresh garlic, which my family mistook for green onions until they tasted them~ 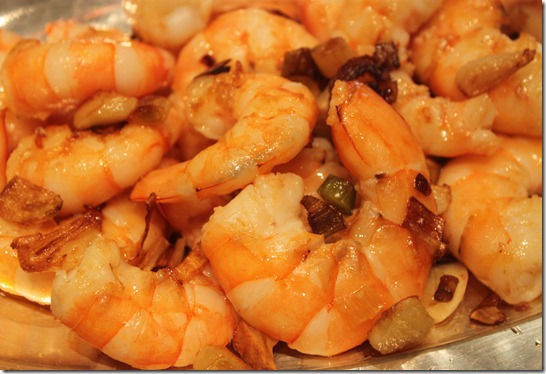 Soon, they were into the dessert table, yes after the appies, snatching homemade eclairs with crème Chantilly and Escondido strawberries, marked with chocolate~ 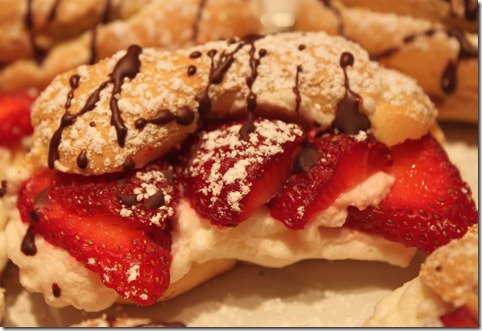 At this point my sister (our hostess) arrived and told me she thought we should not make fresh pasta.  Everyone is late, and we do not have time etc.  Yikes!  This meal is heading sideways.  No Italian meal worth its salt would not include pasta, but what was our option?  She had very little dried pasta on hand, and –horrors- it was not an Italian brand….but she had some dried up ravioli in the fridge, so we used that.

I asked my sister to be responsible for the wine as I wanted to do all the food.  She offered a flavored sparking wine, a bottle of Chianti, and a bottle of Italian red that was labeled Seasons Greetings from Santiago Hills Cleaners.  Personally, I don’t do enough dry cleaning to merit a gift at Christmas, and I would be embarrassed to serve this bottle at the table; it would go in a bouef bourguinon or something.  But she was in charge of the wine and I was cooking away, so I could only say….Hmmmm….

I felt like I was completing multiple Italian sins..No pasta; no structured meal; questionable wine;  my sister was setting the plates for one large dinner plate per person.  The words of Chef Andrea in Rome were ringing in my ears: “The Americans, they eat like animals- they put the pasta on the same plate as the meat and the salad. They eat it all so fast…”  Well, no one seemed to mind but me, we sat down to the lovely table with a trio of vases down the middle~ 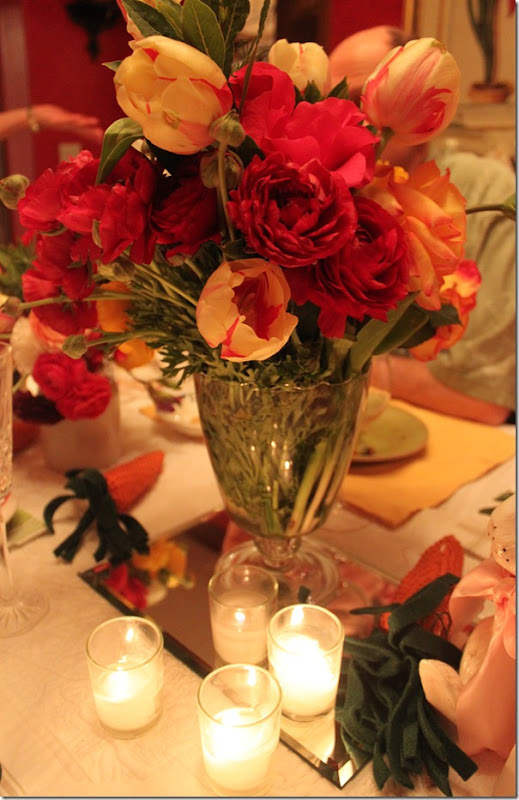 The main course was my version of bistecca fiorentina~ thin cuts of well-marbled rib eye from the Persian market, liberally salted and peppered and pan fried in butter.  These were actually economical for a large group; about $1.50 per steak.  Cremini mushrooms sauteed with fresh garlic were liberally piled on top~ 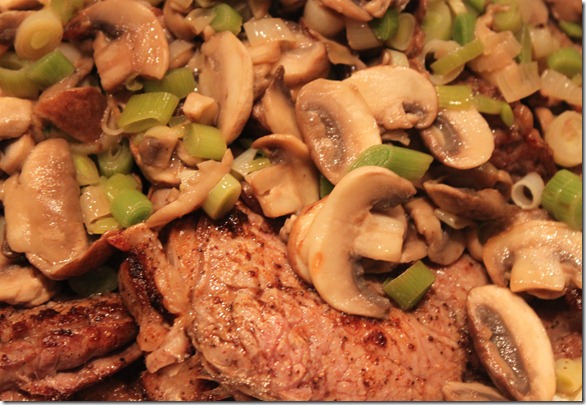 My favorite dish was the salad; arugula and spicy mixed greens from Maggie’s Farm, tossed with finely sliced fresh baby fennel, finely sliced shallots, the diced limequats including the skins (fantastic instead of the usual orange zest) and dressed in a simple homemade vinaigrette.  Everything was served on vintage French hotel silver platters (non breakable and easy to pass around the table).  The salad was then topped with finely sliced parmesano reggiano~ 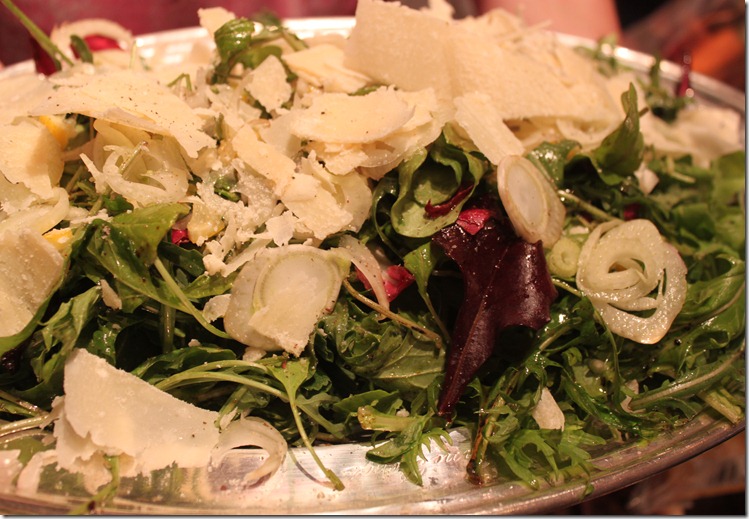 We had a side plate of roasted beets, which my family loves.  Put 3-4 topped beets in tinfoil with a drizzle of olive oil and a few sprigs of thyme; bake at 350 and slip the skins off when cool.  Can you see the various ingredients from Santa Monica in these last two pics? 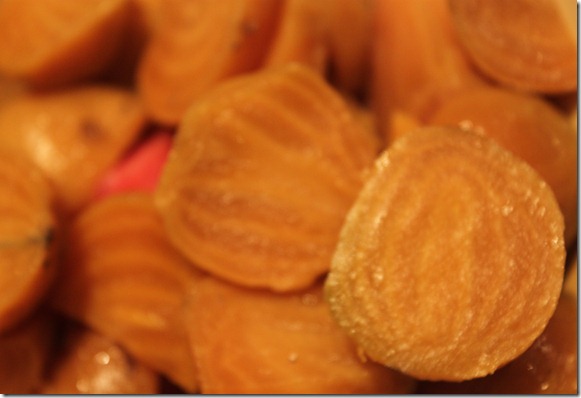 We immediately moved on to dessert, which is the highlight of the show for my family; they LOVE sweets, and one dessert is never enough, there must be three to five choices.  I made parfaits, a type of frozen custard here with strawberry sauce, plated and surrounded by a sauce of Oxnard strawberries and blood oranges from San Diego, topped with a chocolate doodle my niece and I made~ 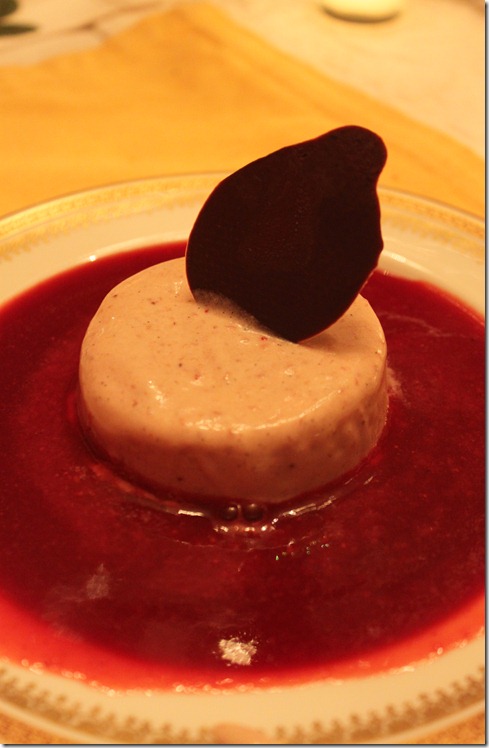 Despite the fact that someone decided to pass their parfait to their wife and spilled the strawberry sauce on the table, on their lap, on the chair and on the carpet, this was pronounced the favorite of the night.

We also had tiramisu, from a recipe someone gave me after their trip to Tuscany.  There are so many variations of this dessert, but I think the best and most authentic ones use whipped egg whites.  I am amazed at the variety of recipes out there; do they even qualify to be called Tiramisu?  Miss Semi-Homemade has something that takes 5 minutes to prepare!  Here is mine, on the plate~ 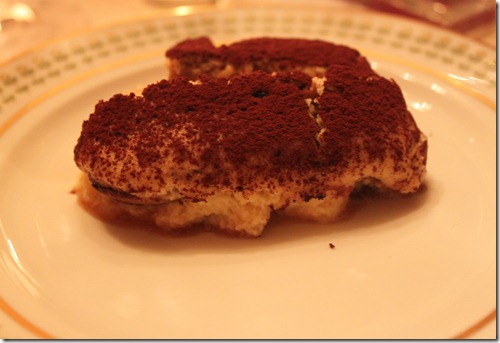 I really made this dessert for one of my brothers in law; it’s his favorite, though I admit it has been about 5 years since I have made it...too much French goodness.    Though it was elegantly presented in an early American footed compote, he pronounced it a little soggy, and he was right….I am out of practice on Tiramisu!

Another brother in law at the table had his own comments:  “Bad Tiramisu is like bad sex, bad Tiramisu is better than nothing, and so this is still pretty darn good.” As he ignored further comments, his wife says to the table, “don’t mind him, he’s just enjoying his bad sex.”  Roars of laughter around the table.  I’ll make this again and do a post on it this summer.

The remaining eclairs were passed around, as were plates of white- and dark-chocolate dipped Carlsbad strawberries. 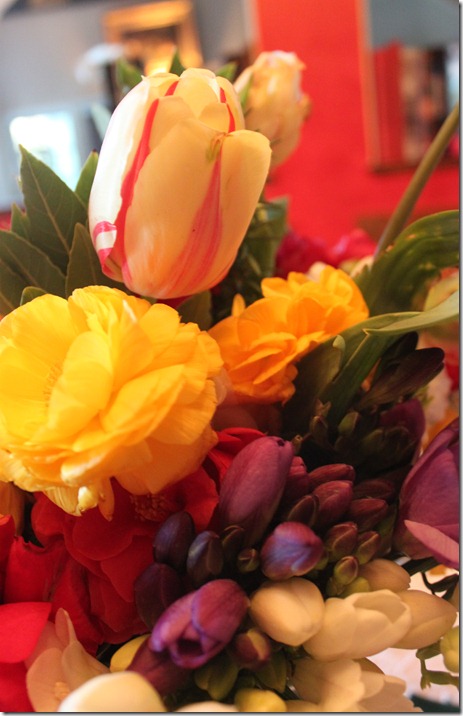 The next day I felt slightly vindicated.  We reconvened as a family for breakfast, and I thought it would be the perfect time, late morning, for my sister and I to finally make the fresh pasta, as we had in Tuscany.  Though just as I was getting everything out on the worktable, my sister and brother decided to dash off to the gym.  So much for family lunch.  I made angel hair and fettuccine, and it was fantastic for dinner.

I have a few more posts to show you from Italy, though my thoughts are on France as I will be there before the end of the month.