I made the acquaintance of a veteran copper collector in France, oh, some time ago.  Guy has been my pen pal of sorts, and in our regular emails we covered the waterfront, from copper to various antiques & collectibles, a little of our personal lives, and the political situation in the U.S. and France.   I have acquired many lovely pieces of antique French copper from Guy, all of which I am either using or in the process of re-tinning for use here and in Beaune.

While he initially shipped pieces to me in Beaune, before this last trip Guy and his wife Jacqueline invited me to not only visit them in the town of Vannes, in Brittany, but to be their guests.  A small gamble, to spend a long weekend with relative “strangers”?  Perhaps. But the French do not invite just anyone to their homes; this was an honor.  I thought it brave of them also to offer to host une Americaine they had not met in person, but also her entourage of friends.  But I trust my instincts, and I do love the Brittany coast.  And, yes, I was curious to see more of Guy’s copper collection.  In the end it was just me and Laura, and we were in for a French-style treat~ 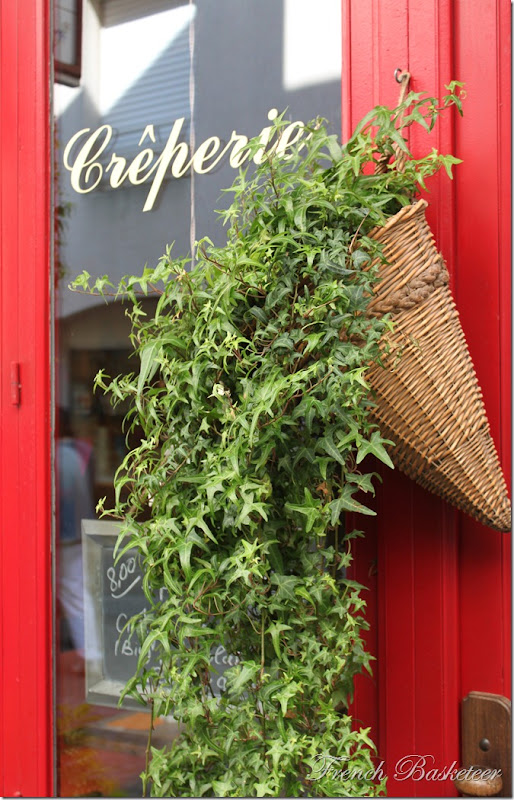 I have spent much time in the northern part of Brittany, in the St. Malo area.  Lovely, and fun, watching the tide come in, as Victor Hugo said, “at a gallop.”  There was so much prep for this last trip I admit, I really didn’t have time to research Vannes, which is on the southern coast of Brittany.  Upon arrival, Guy & Jacqueline met us is in front of the Hotel du Ville, and showed us to their lovely home; and we soon went for a tour of the old town, each shop more charming than the last~ 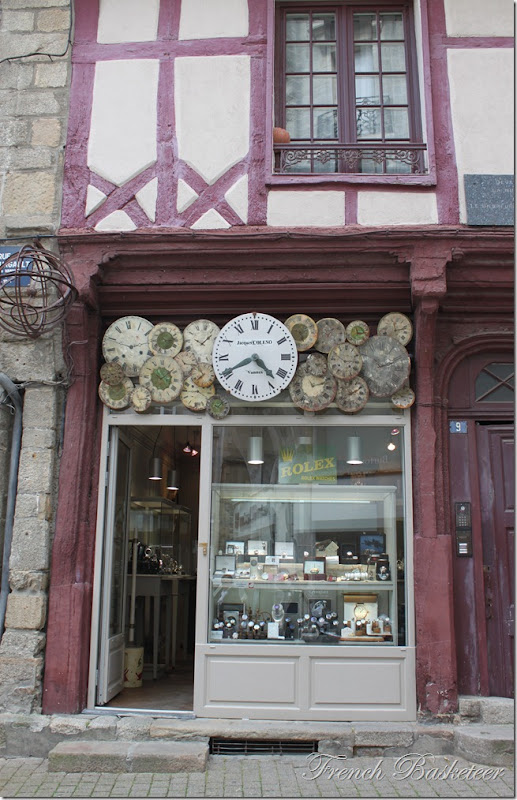 I have referred to the maison à colombages also called maison à pan de bois in some posts. Most people see these “half-timbered houses” and think it is English style.  I trace this back to William the Conqueror in 1066; the French influence ran over into England.  In any case, the style was alive and well in France from about the 12th Century into the 19th Century.  The buildings have a “boned” structure of wood beams filled in with brick and plaster, built on top of a first (ground) floor made of stone.  You see this style of construction in most parts of France (and elsewhere in Europe), including in Burgundy, but most often in Normandy and Brittany.  The center of Vannes is very charming as it is almost all colombages style, with many fine examples and imposing elevations.  The buildings are painted in assorted colors, with the traditional slate or ardoise roofs at precipitous angles~ 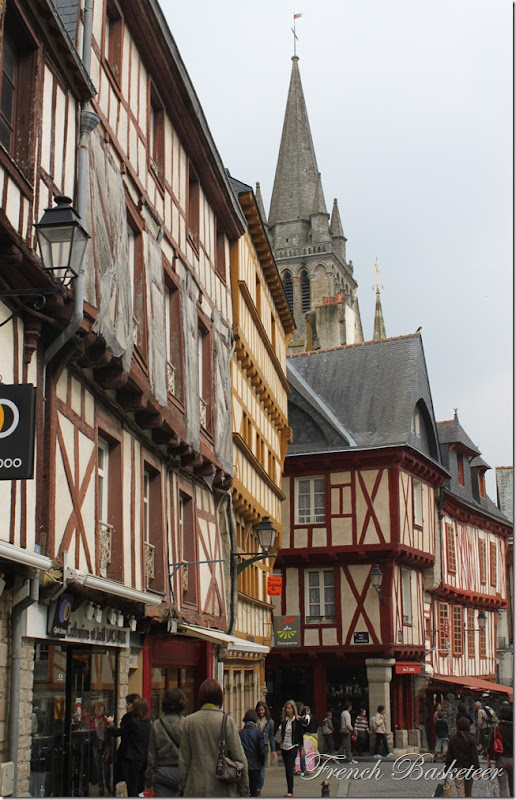 The architecture is amazing; look at how close these two roofs are!  That’s the spire of the Cathedral of St. Pierre in the background~ 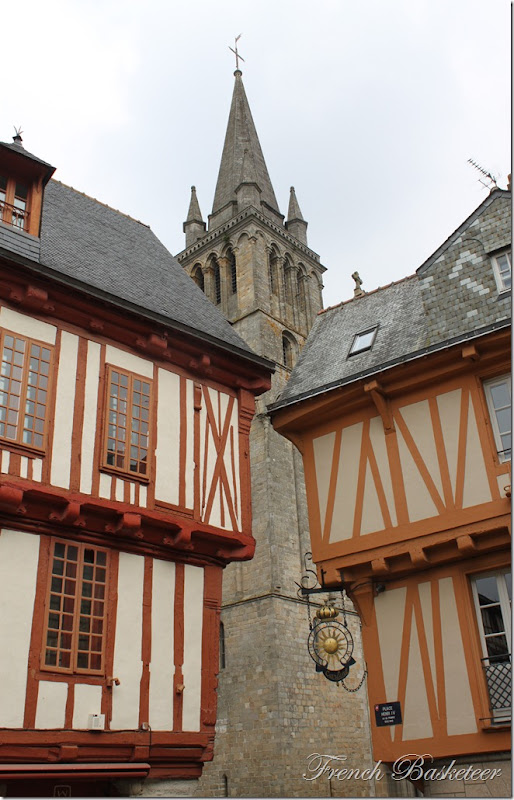 The colors, oh the colors! The geometry of the beams…the charming rooflines and windows!~ 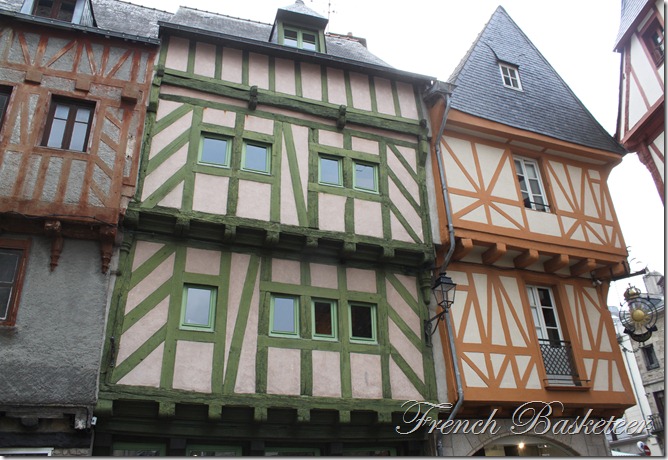 I love this pic for the seated patrons~ one happy, one perhaps grumpy, below a magnificent façade and elevation~ 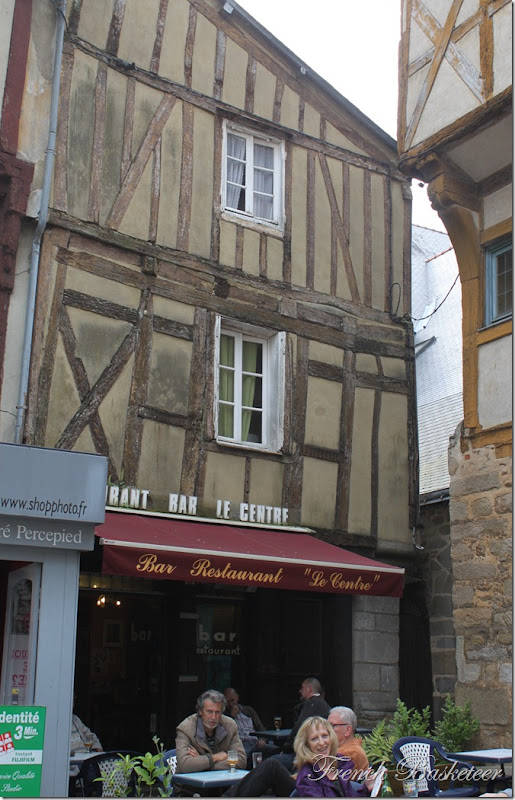 Here you get two treats~ the fantastic grillage of the ironwork on the left, and on the right side of the street you see the avancement of the facade.  There is always a generous overhang at the top, and each floor below recedes just slightly; this keeps the rain and the damp off the building, in principle…. 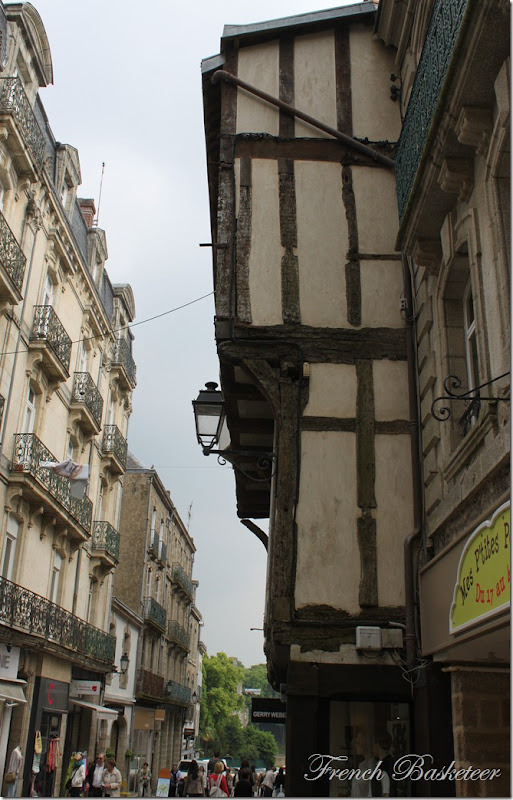 There is frequently a complicated system of egoutoires (drainage or rain gutters) for these buildings.  Fantastic~ 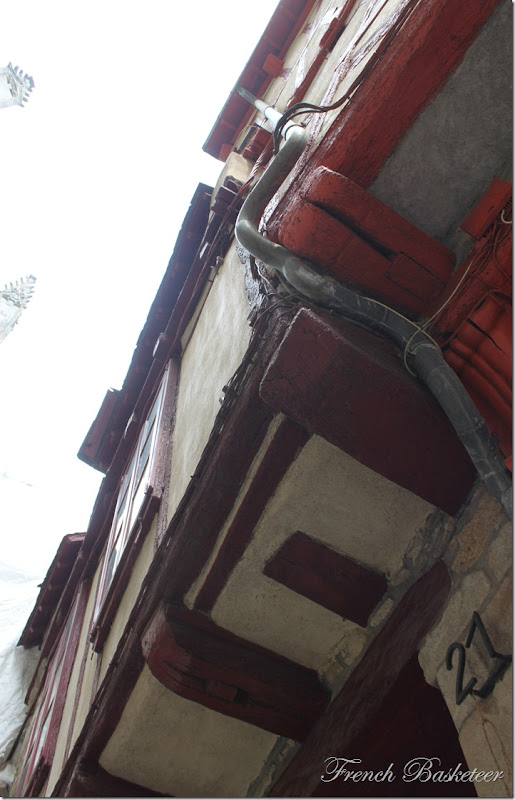 Elsewhere in Vannes, the stately homes and ironwork reminds of the French influence on New Orleans~ 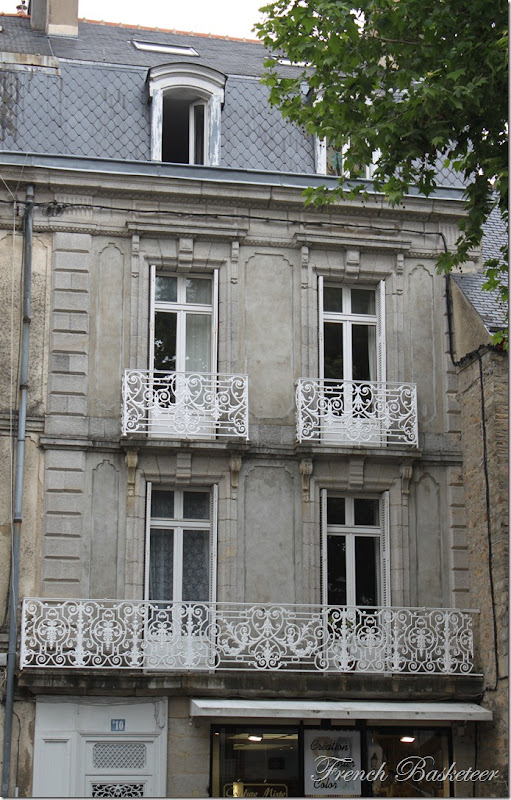 And yet there is the nautical influence; these are in the style of shipheads and I think they date to the 1600’s, the personnages of “the city of Vannes and his wife.”  The color of his shirt is faded but the stripes are the color “Brittany blue.”  I can’t remember the exact story but they are famous, and well-protected by the avancement of the building above~ 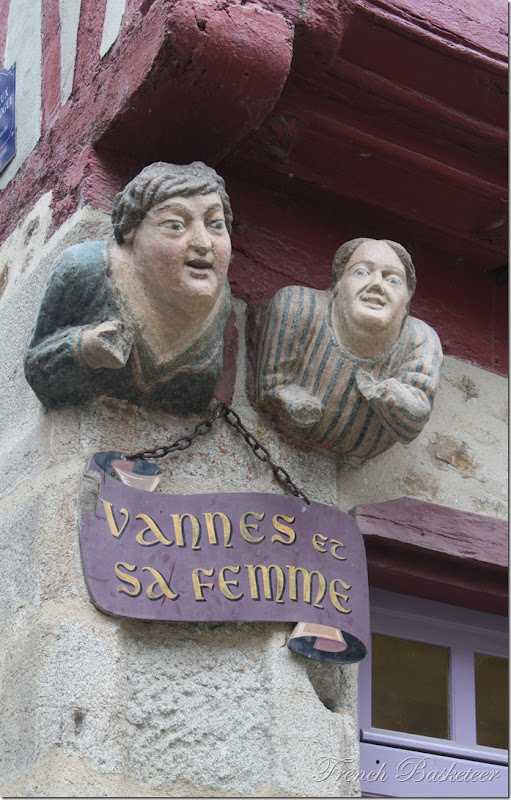 Beauty and charm is found all over town~ 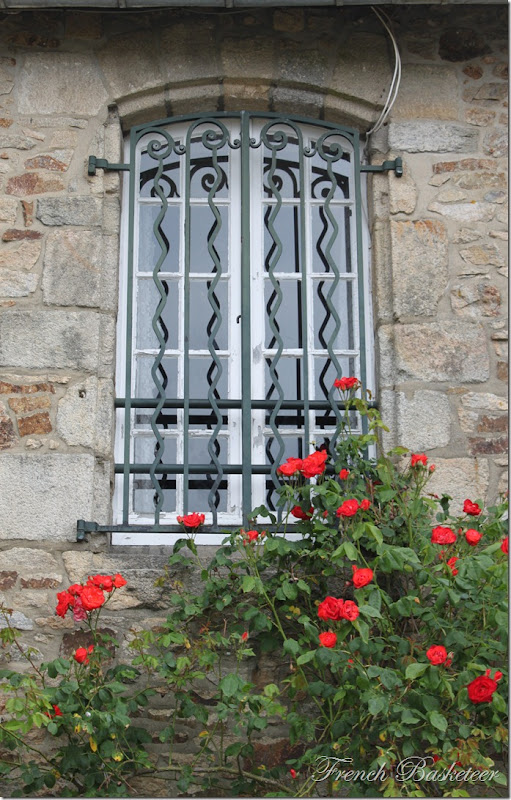 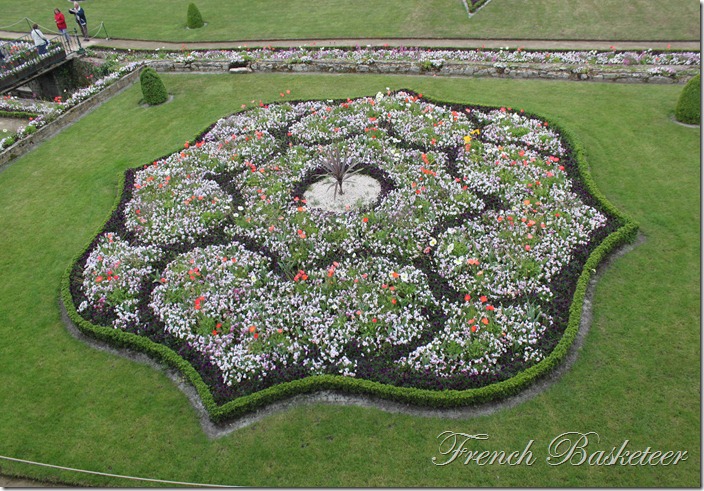 In the sunlight, the buildings are magnificent; no wonder Brittany is especially popular in summer~ 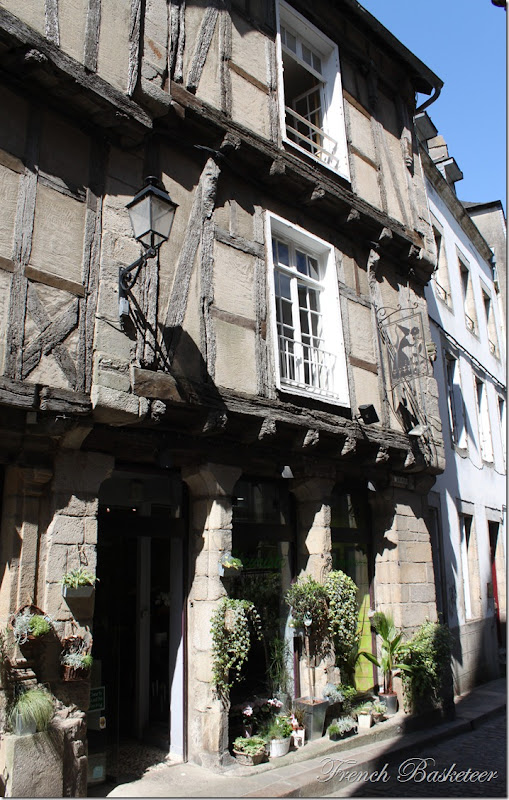 More to show you next time of the Coast of Brittany.