80 years of age is a nice milestone, and of course our entire family came together to celebrate.  All five kids were in town for the week, and arriving at the gate Saturday afternoon, you knew it was a party; I always dress the stone arch for Christmas, but rarely in summer, but this was a special occasion; tutorial on how to do this festive arrival soon~ 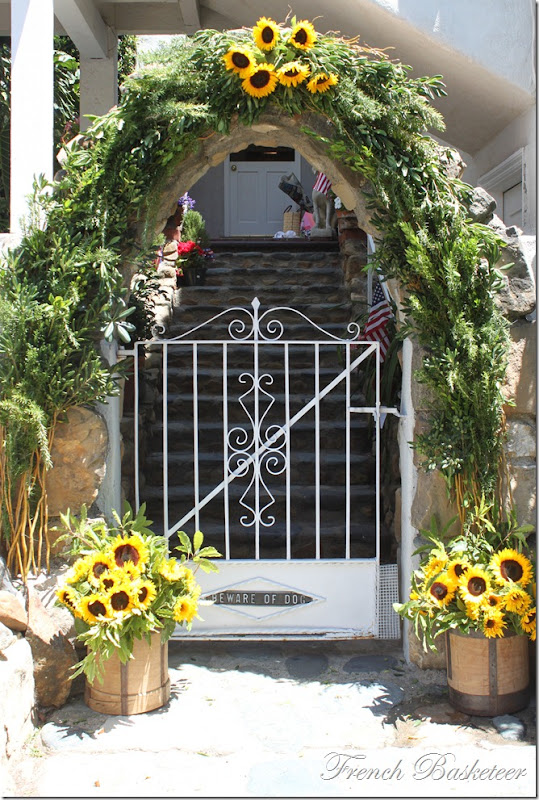 Dad didn’t want a huge crowd; we had about 35 people, mostly family, and started at noon; fresh goat cheese from Nicolau Farms got dressed up with herbs from the garden and rosemary walnut bread or crackers~ 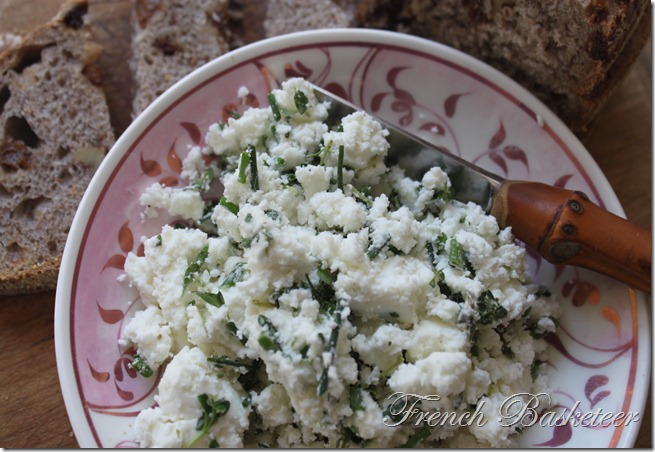 Lots of fresh shrimp and slices of Reed Avocado from Corona del Mar market, and Ceviche from James of Ceviche Shack, San Diego; he’s been at our Sunday market for a few weeks and the halibut ceviche is my favorite; this was a big hit with the crowd~ 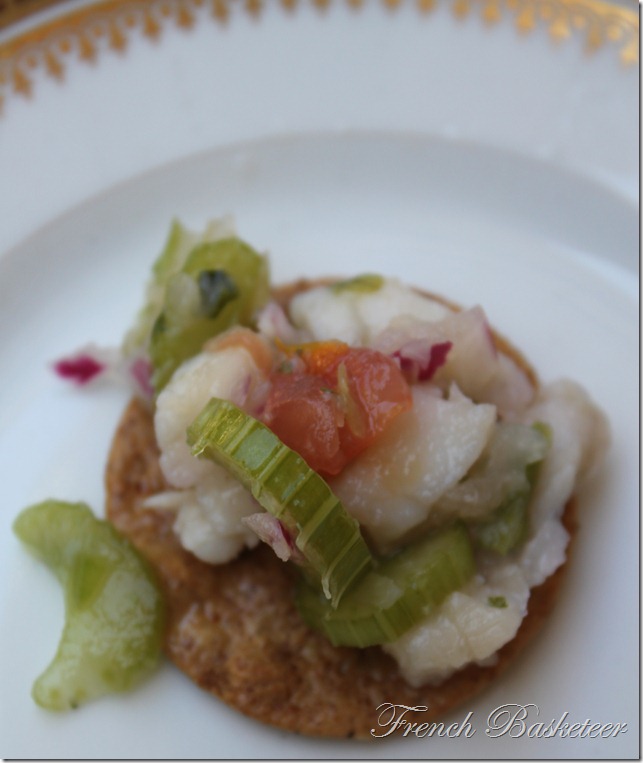 A few days earlier, Dad said that this party was not for him, it was for us.  What he meant was that all those pink flowers spread around the house were my Mom’s idea, and he was right, of course~ 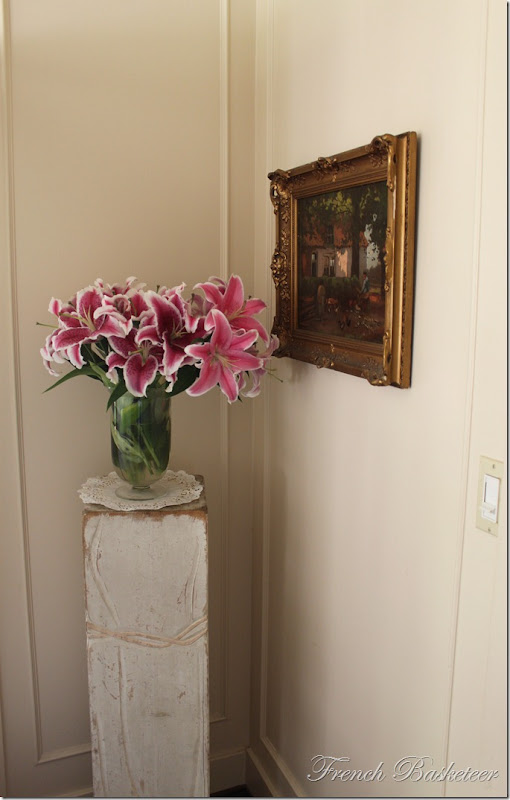 I made a run to the LA Flower Mart the week before at my Mom’s request, and filled the house and patio with lots of potted and cut flowers.  She wanted lots of fragrance and pretty flowers, and I did it all for her~ 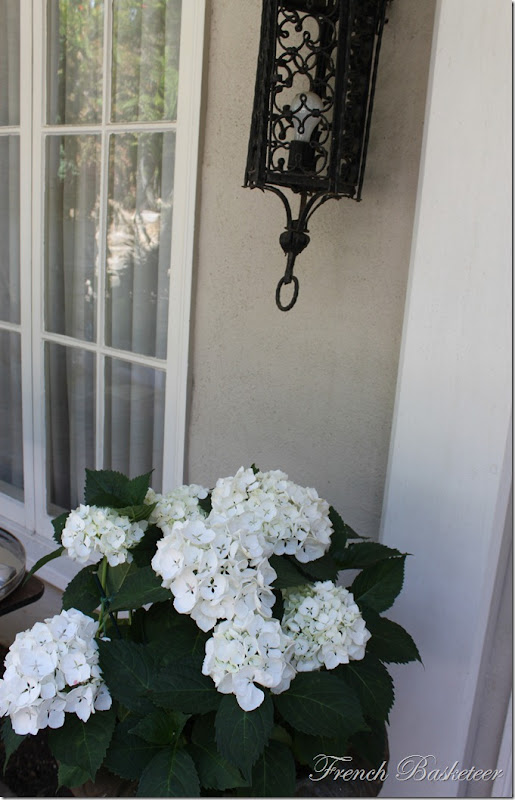 Yes, I cater to my parents…..if an abundance of fresh flowers make Mom happy, I do it; this mirror was done with the assistance of tall Nick, our first guest; more sparse than my usual on the mirror but it was pretty~ 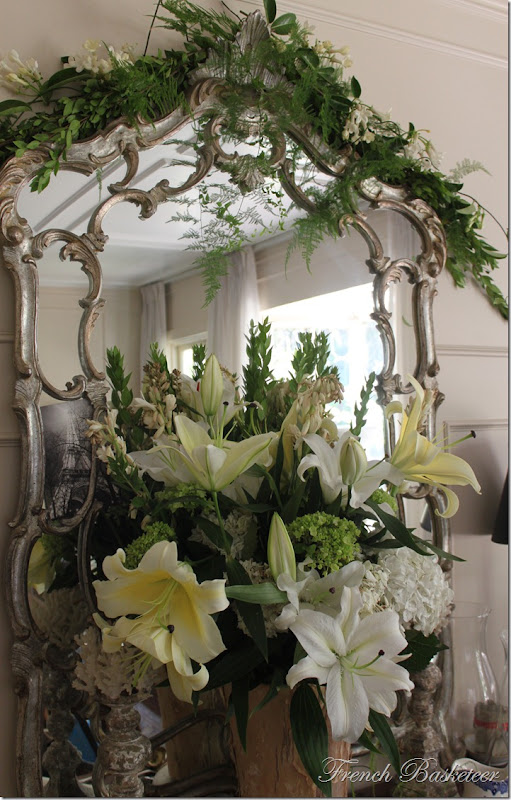 Wanting to capture summer in its prime, I spent weeks preparing a full bar of infused vodkas and farmers market fruit syrups, each labeled, each taken at the peak, and most with an herb component.  Blackberry-Mint and Blackberry-Rosemary were the most popular syrups, on top of iced vodka or with tonic or Perrier for a virgin drink~ 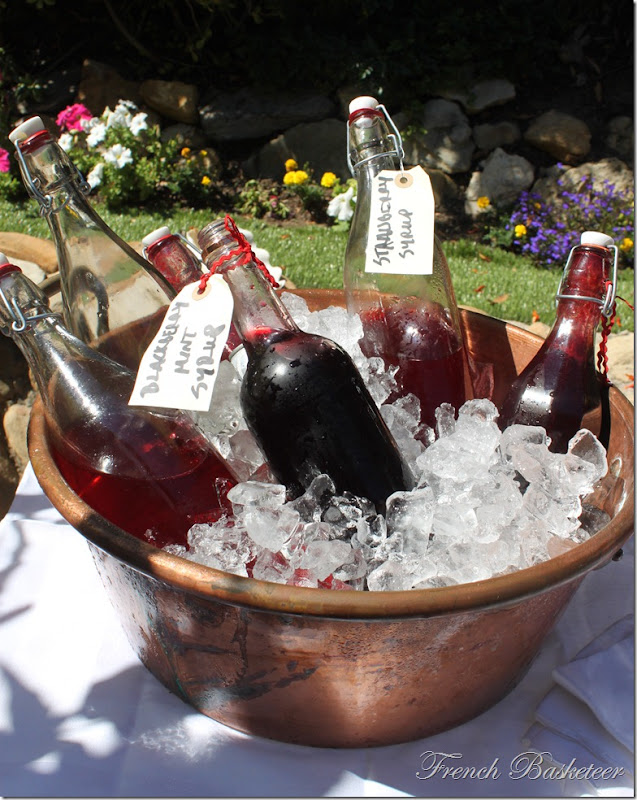 Among the infused vodkas, the Lemon won hands down among this crowd; it was clean and guests added various fruit syrups to it. The Blueberry vodka was pretty, Strawberry and Peach were also fantastic~ 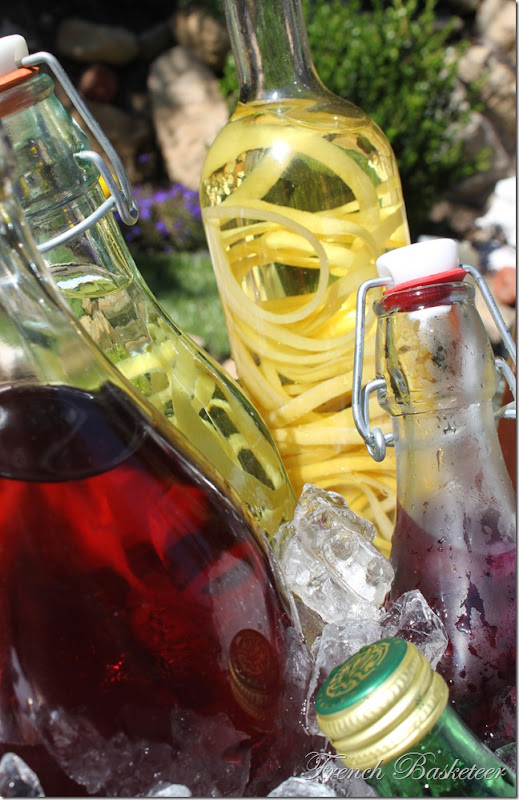 Everyone did a fine job creating their own drink concoctions based on the materials set out, and it freed me up to spend time with guests instead of tending bar~ 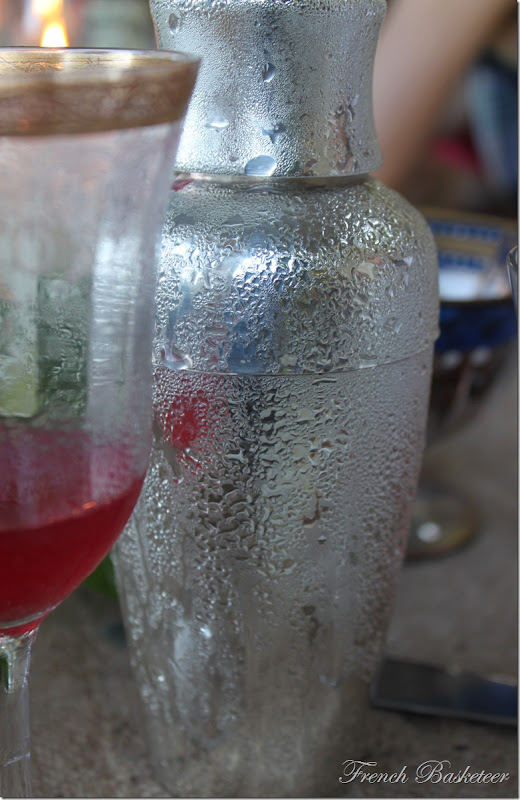 I set an 18 foot table with washed burlap cloth under the loggia; the newly re-done black & white chairs on one side were sharp~ 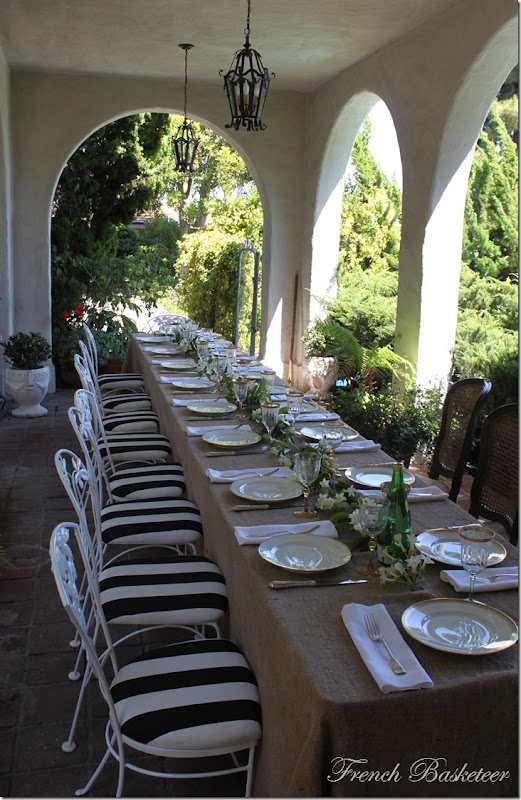 I debated candelabra and fancier affair, but in the end I quickly cut Stefanotis and common fern from the garden to fill the length of the table, and added ivory pillars under hurricane shades.  The Stephanotis was at its perfection; it was a simple yet elegant table.  It was all that was needed~ 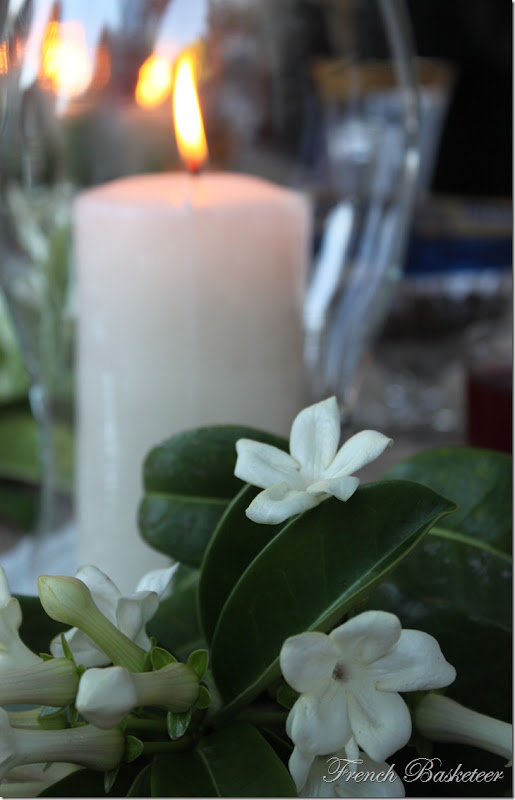 For our main course, we had a poached half salmon (which I could prepare in the morning), a baked potato bar, and Dad wanted steaks on the BBQ. Here he is preparing them with assistance from my sister Jacquie, using the largest meat platter I have, an English platter from the NYC 26th Street Flea~ 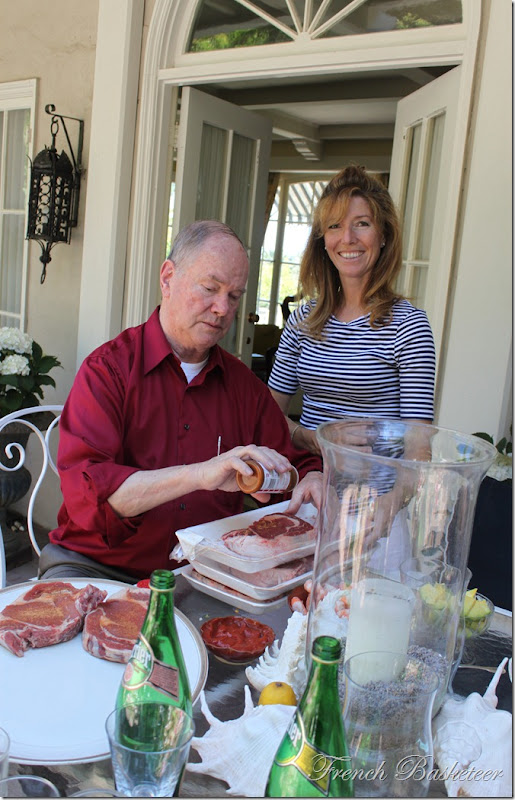 While the party was in swing, we had a series of photo shoots, Dad with the kids, grandgirls and boys.  Then it was time to sit down, with toast after toast~ 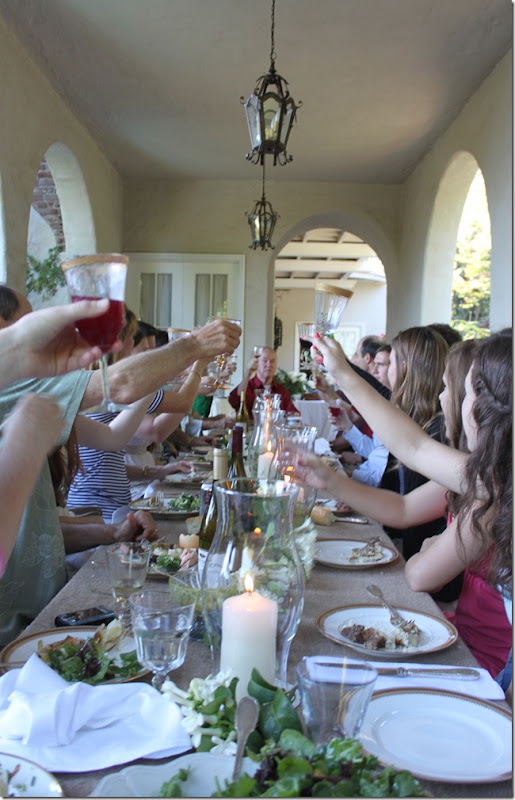 For dessert, I made Dad’s traditional birthday cake: homemade Devil’s Food with Buttercream Frosting and Coconut.  In 80 years he has never had a store-bought cake, and with good reason, the cake was devoured by all!  Because he also adores ice cream, we had a full ice cream bar.  I debated bamboo or simpler utensils, but in the end I brought out Limoges berry bowls and Vielliard 19thC vermeil spoons~ 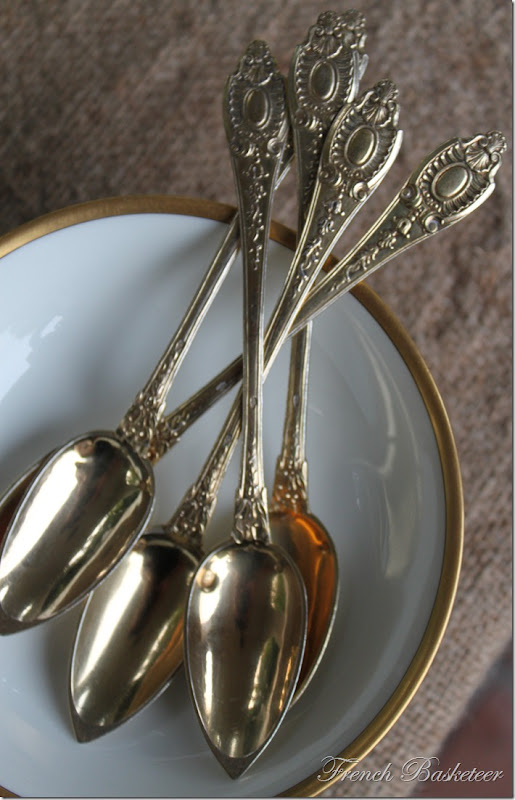 And French sterling spoons circa 1798; even if you have an ice cream bar, why not have fancy spoons?~ 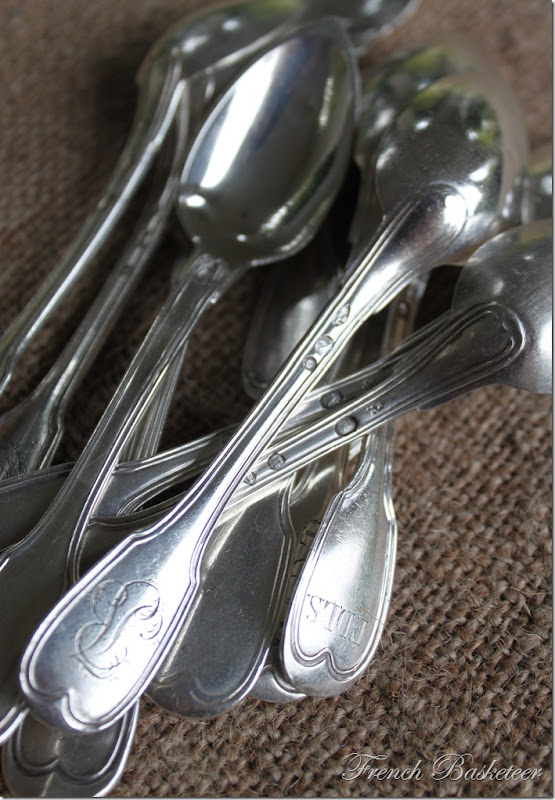 I have been making ice cream for weeks, many flavors from David Liebovitz’ book Perfect Scoop, and most with natural flavors that I had hoped to blog about by now but I will get to soon.  Here is a partial list: Vanilla Bean, Chocolate, Chocolate with Peanut Butter Chips, Rocky Road, Rose, Rose Tea, Jasmin, Fresh Mint with White Chocolate, Peach, Honey, Honey-Lavender, and Blackberry. 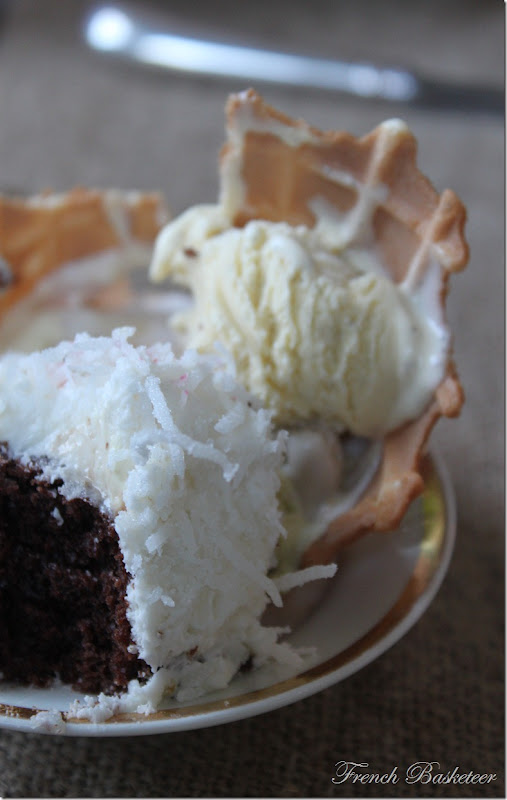 Along with the ice cream we had a variety of toppings: cherries in red wine, pralined almonds (Perfect Scoop), Chocolate, Cinnamon and raw almonds from Hopkins, and lots of Sees candy on the side~ 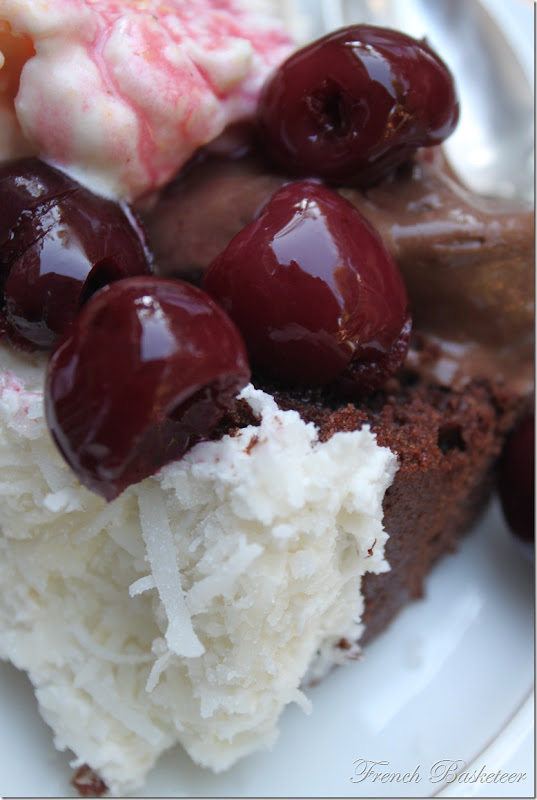 I wish I had taken more pics, but I was tending to guests and by the evening hours I was uncharacteristically exhausted.  In the end, the party was a big success, everyone left with full tummies and happy thoughts.  I fell into bed ready to work the next day on the magazine shoot in two day’s time.  More soon~~~