The main event of our cooking class at Sur La Table on Sunday was tomato sauce.  Who wouldn’t love the gift of a large jar of tomato sauce, especially if it is made with organic, local tomatoes, from a true Italian recipe and by the hands of a friend and attractively packaged? 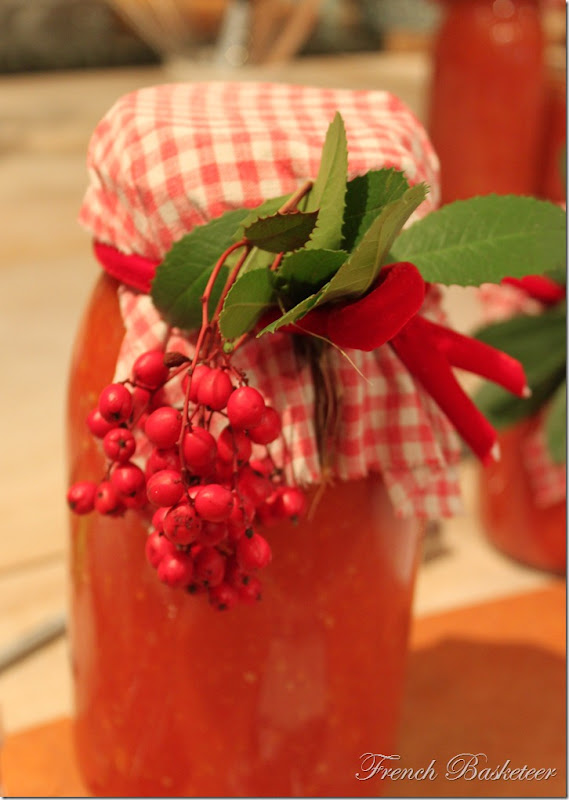 There are dozens of ways to prepare tomato sauce, of course.  A friend from Bologna taught me to slow-cook whole, peeled, caned tomatoes.  My Mom adds sugar to canned paste.  The sauce we made is the one I call Roman Tomato Sauce because I learned it at a cooking class in Rome.  I love it because it is very fresh, a classic Italian tomato sauce with a nice texture from the addition of carrots, onion and celery.  It is a tasty and true sauce, which can be doctored further with salt, pepper or herbs to taste, but I love it just the way it is, on pasta or pizza.  I had questions about garlic; you can infuse the olive oil in the recipe with garlic, but I have another recipe also from Rome with garlic so this one I like nature.

The base of the sauce is what the Italians call Soffritto.  This is similar to the French Mirepoix, which is a mix of various aromatics, principally carrot, celery and onion, but may include other ingredients such as garlic and herbs.  Mirepoix is often used to flavor the base for stews, stocks and other hearty dishes, though the aromatics are usually strained from the food or sauce prior to final presentation, whereas in this sauce the veggies remain.

The basic recipe calls for 1 carrot, 1 stalk celery, 1 medium onion and about five pounds of tomatoes.  I usually double the veggies to make a more unctuous sauce; you can’t go wrong, whatever you do, and can adjust proportions according to taste.

Sunday, we bought 30+ pounds of tomatoes at the Ranch Santa Fe Farmers Market; some I had bought the week before so that they would fully ripen, many we bought that morning, and they all came from local grower and tomato specialist Valdivia Farms.  We used some yellow heirloom tomatoes, but mostly vine-ripened red beefsteak tomatoes.  For a good tomato sauce, you want acidity, to give it flavor and tang; many heirloom varieties will be more sweet than acidic, and your sauce will taste like mush.  When making sauce from tomatoes from the garden, I also add in a lot of cherry tomatoes.  So look for good tomatoes!

We plunged the tomatoes in boiling water for a few minutes, until their skins burst, and then they were scooped out of the pot with 19thC French copper skimmers and set in bowls to cool, then the skins slipped off and the core tops were removed.  I regret that I have no pics of this process, because it was fun!

We then turned to the Soffritto, roughly dicing three large onions, two small bunches of carrots from Sage Mountain Farm, and celery from Suncoast Farms.  If you buy anything organic, make it celery; commercially grown celery tests for (on average) some 20 different pesticides. 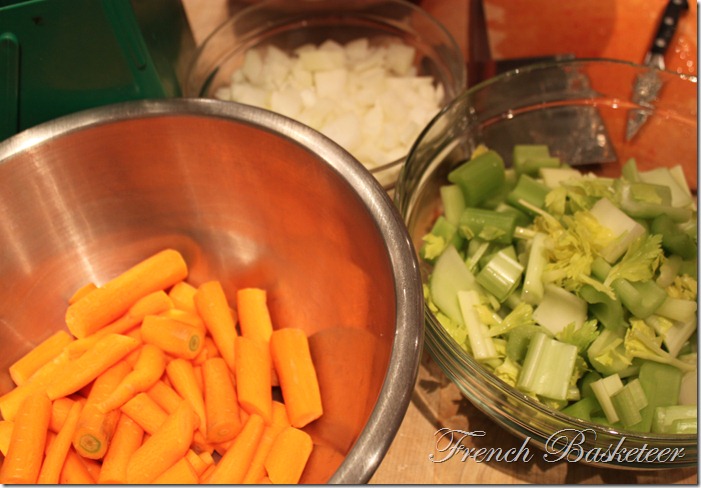 We ran this through the Sur La Table “Breville Sous Chef,” a truly remarkable machine I call a Fait Tout, which turned our veggies into this in two batches; this is before cooking~ 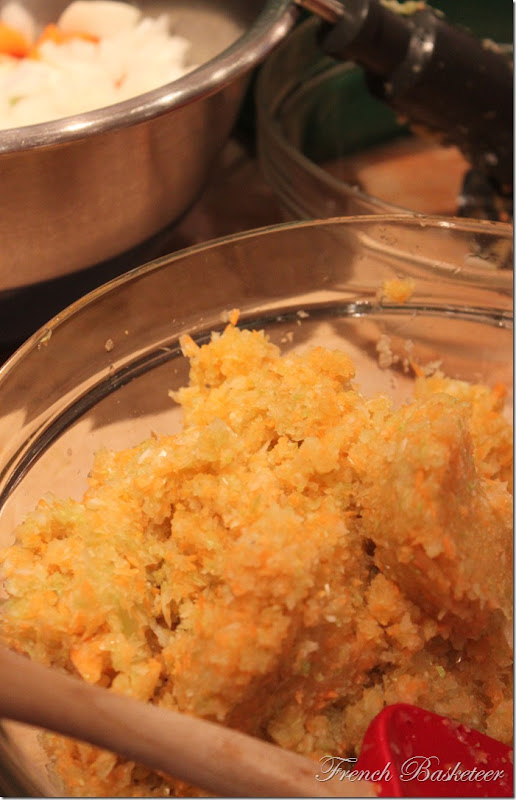 In three separate batches, the Soffritto was fried with a generous (~1/3cup) of olive oil at a moderate temperature; you can add a little white wine too, which makes it even better~ 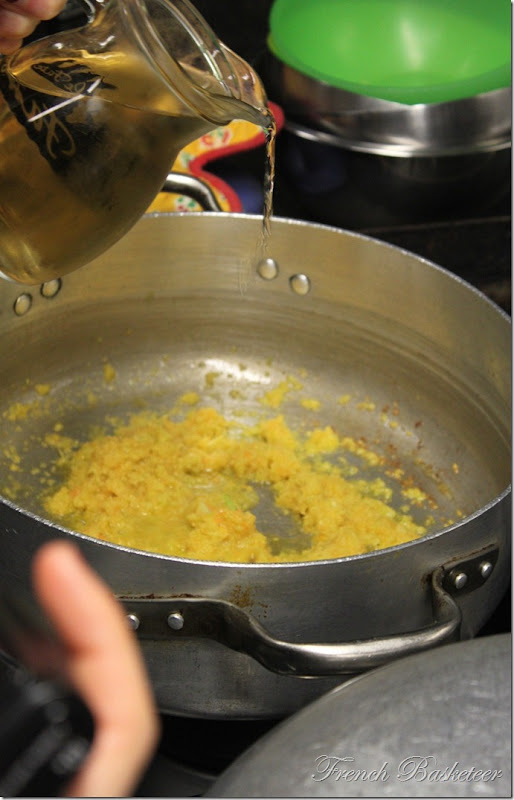 We put B in charge of this stage, as he was our resident Italian, a role which he clearly relished, and the Soffritto was cooked for about 20 minutes, again, not too hot, turning and stirring carefully to cook evenly~ 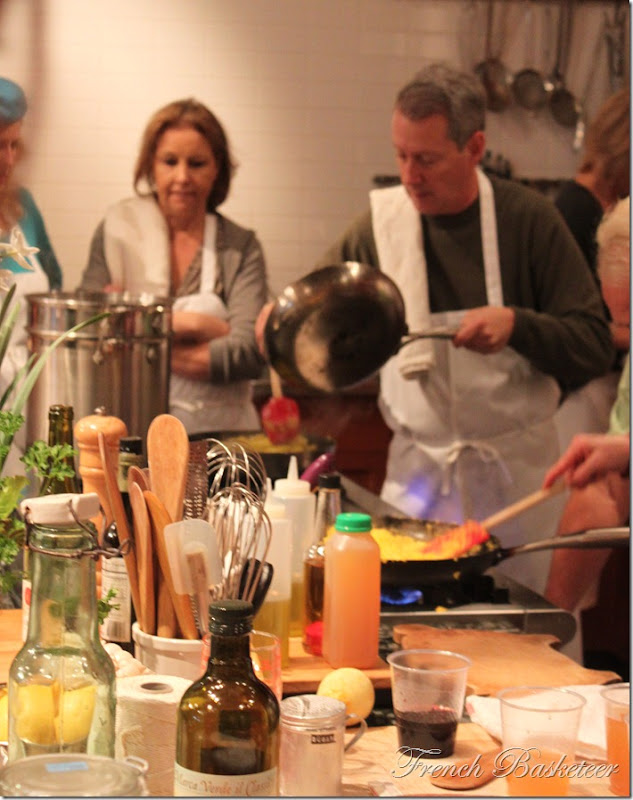 While the Soffritto cooked, P was busy running all of the peeled tomatoes through the Breville; here are all the tomatoes in the copper bowls surrounding the Breville; to this we added three cans of whole peeled Italian tomatoes; Italian tomatoes have the highest lycopene count of any tomato in the world, so they are a nice addition to the sauce for nutrition, texture and authenticity~ 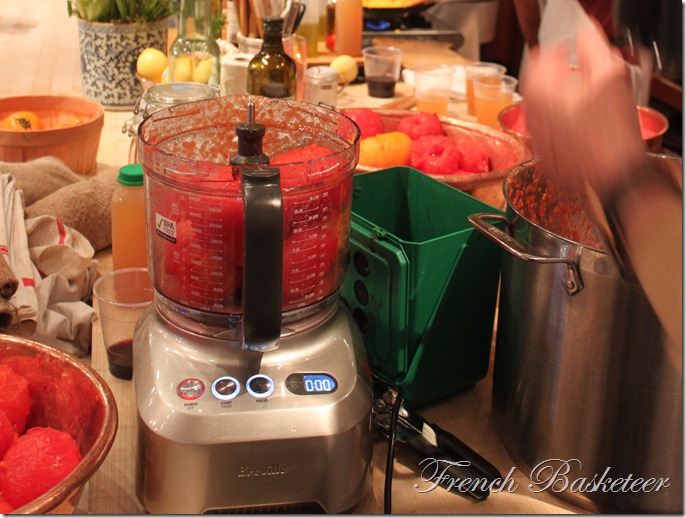 Combine the Soffritto with the pureed tomatoes in a pot (we had three enormous pots!) and cook for about ten minutes.  We could not resist and made a pot of pasta on the spot, for a little snack; I can’t remember what this shape was called, but it is stocked by Sur La Table and it was excellent with our Roman Tomato Sauce; nothing like tasting what you have just made and will offer for gifts for holiday~ 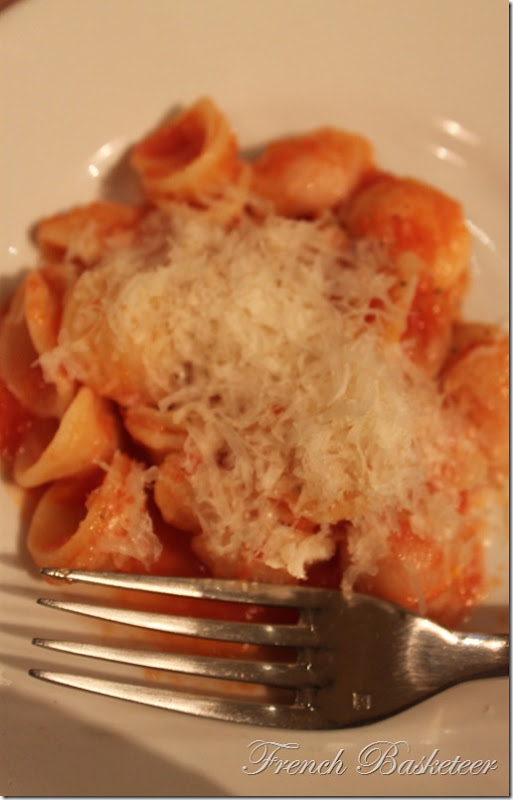 Prepare each jar by sterilizing it, then add a bay leaf and sprig of basil in the bottom.  The bay aids in digestion, which is why it is added to sauces and stocks.  Ladle the jars full of the hot sauce and seal; I refrigerate rather than can them in water, but please follow safe food handling guidelines for gifts.

I lost track of how many jars of sauce were prepared; we ran out of the jars we brought and used ones we bought, the extra sauce filled half a dozen zip lock bags for consumption at home.  This XL Le Parfait French jar is I think a litre; it is my favorite this year, a real statement gift!  $9.99 at my local Ace Hardware store. 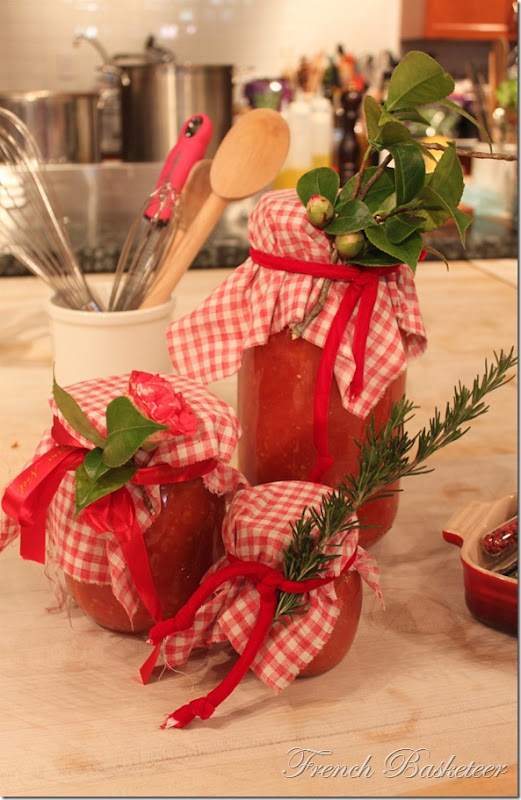 Great job, my team of Chefs!