A small gathering for Thanksgiving dinner this year was a welcome change for me.  In the past I have hosted dinner for 25, with two turkeys and hoardes of children and the chaos of extra tables and seating, but I didn’t feel the pressure this year as we would be just eight for dinner.  My focus was instead on securing the best Turkey, which I reserved from my favorite poultry farm, DaLe Ranch.  However due to a mix-up, my fresh, organic, free-range bird ended up at the wrong farmers market last Sunday and was sold before we figured out what had happened.  Unhappy, yes, but it was not worth getting angry, and Ashleigh has promised to make it up to me for Christmas dinner.  I found a fresh organic bird as a substitute, baked pies on Wednesday night and started on the table on Thursday morning after the turkey was in the oven.  I have been fixated on images from the beautiful 19th Century kitchen at La Mirande in Avignon, see images HERE, so I decided to create a centerpiece worthy of a still life, or at least a scene from a French kitchen~ 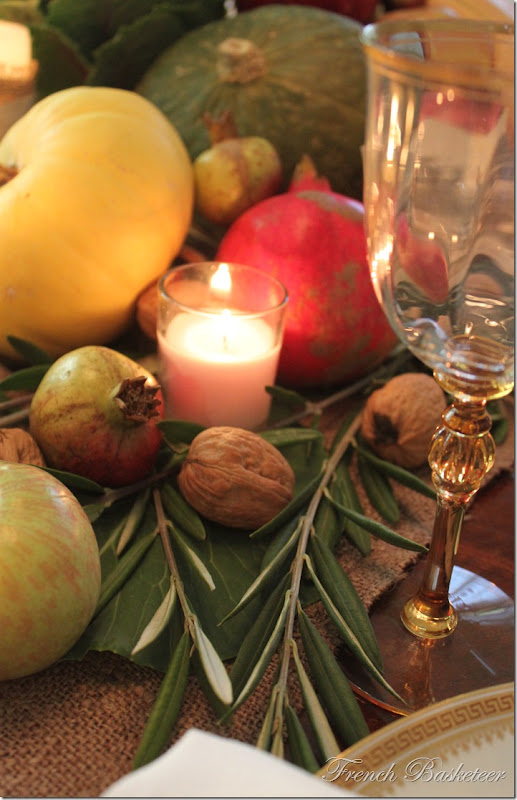 I started with a piece of the washed burlap from the magazine shoot, with a small wad of newspaper below for volume.  I added a few olive branches I pulled from the trees at the grocery store, where I found the only item purchased for the table, a Savoy Cabbage, which despite not having its full outer leaves looks like a French Kitchen to me; otherwise I began assembling elements from the kitchen and from my market baskets set outside the kitchen door, including an acorn squash, and several large pomegranates that are soon going to make infused vodka gifts~ 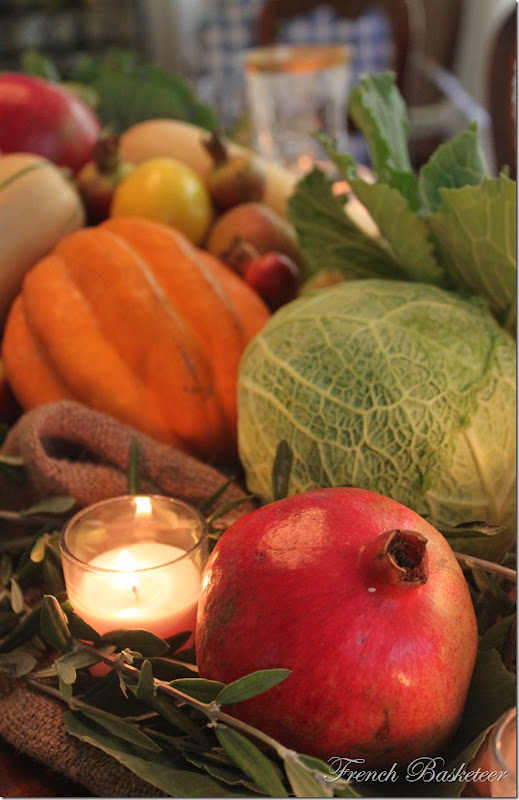 …as well as cabbage leaves from my potager, mini-pomegrantes from a neighbor, a few more free apples from the crate of Smit’s apples I got a few weeks ago for free and a yellow pumpkin I bought a few weeks ago at the Saturday market~ 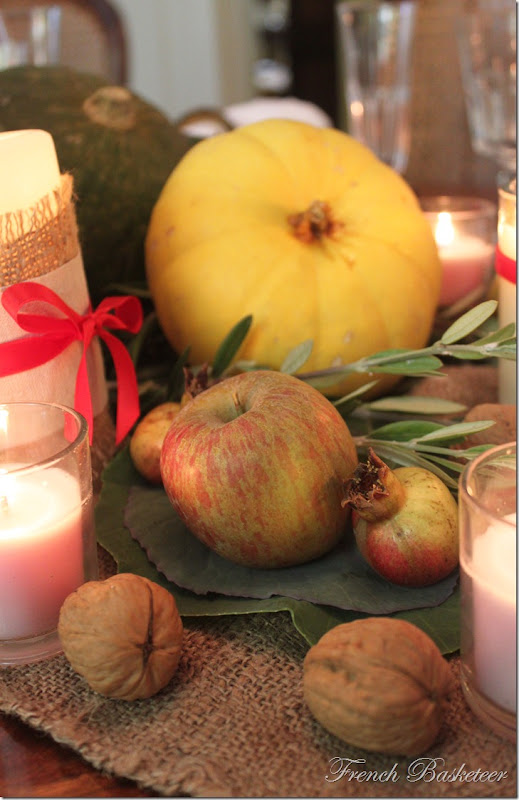 And then more layers, a few heads of kale from the garden which added volume, butternut squash that were in reserve for the meal’s appetizers, lots of white votive candles and a small handful of walnuts from the bowl on the sideboard~ 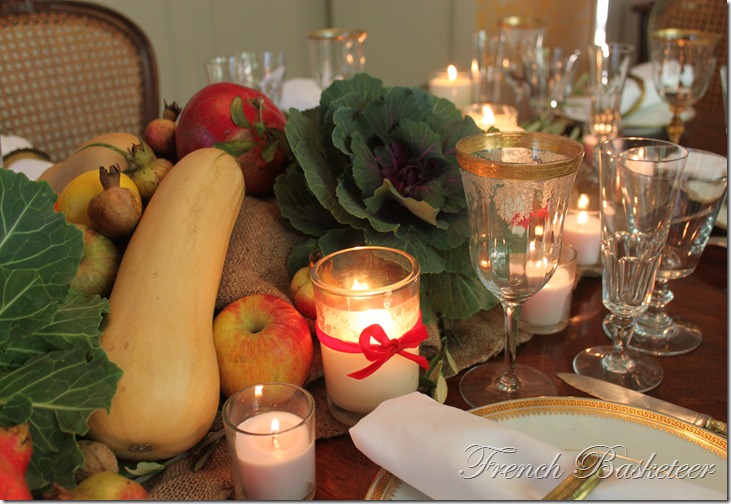 Not too bad, I thought, by 3pm the table was set~ the alcove dressed in green and white was lovely, and now just needs a few pointsettia and another amaryllis to make the transition to Christmas~ 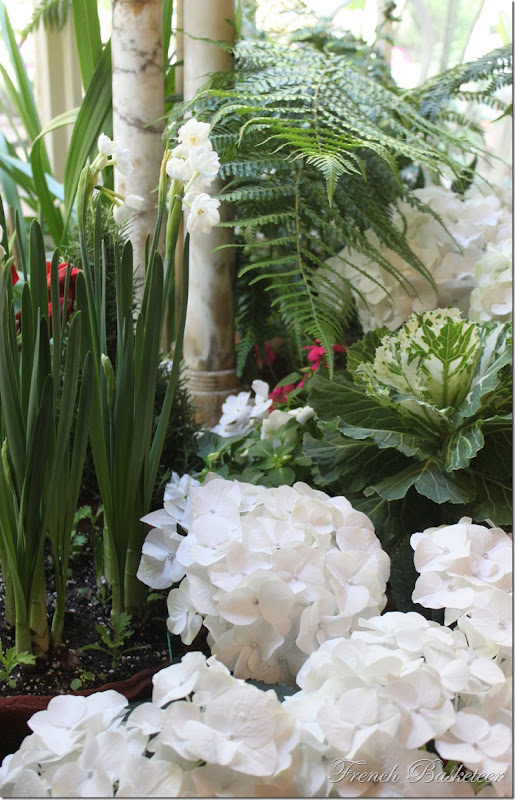 To ensure the setting was not too casual, I used Matteo linen napkins in white, beautiful French brass curtain rings for the napkins, and French Sterling and Vermeil flatware; I can source napkin rings for you starting at $3 each for simple ones you have seen recently in my posts; these acanthus leaf ones were also very reasonable despite the beautiful detail~ 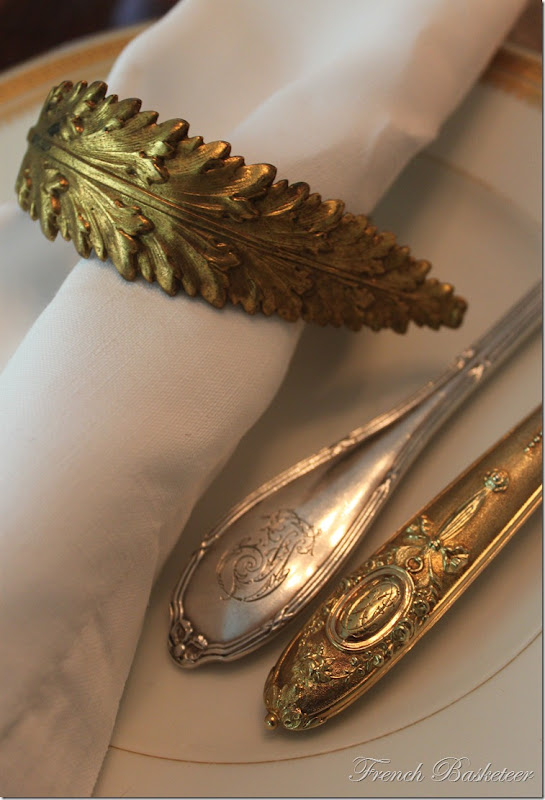 Those of you who follow my blog know my family is consistently late for dinners.  Tonight was no exception as I said, “do not show up at 7, we are eating at 5 o’clock.”  Most of them showed up at 6pm saying “you said we would eat at 7.”  I can’t win.  Next time, should I start eating without them, or do I need to send formal invites? When they did arrive, we started with Nancy Silverton’s Butternut Squash Crostini, easy and phenomenally good.  While this was very filling (each person needed only one or two), the flavor was seasonal and this was a Wow item in the menu.  Tutorial this week~ 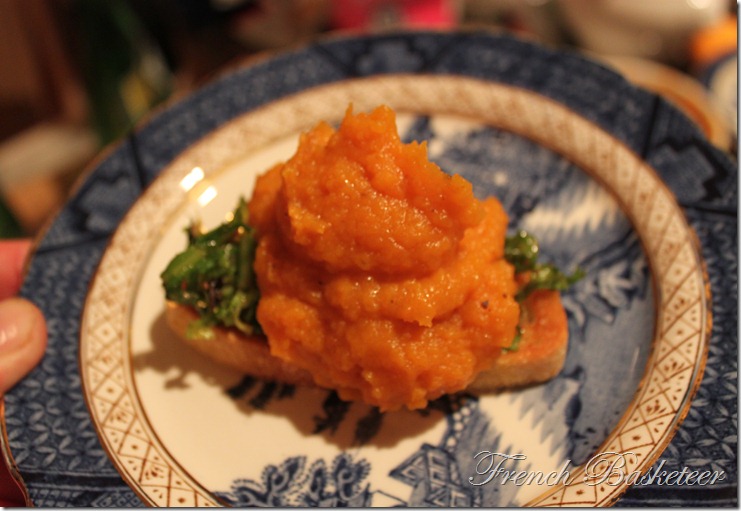 Cocktail hour was condensed into 15 minutes as they also mowed through a baked Camembert, which was excellent with the vin chaud or mulled wine I had on the stove in the kitchen; cheese tutorial also to follow as this is great for Christmas~ 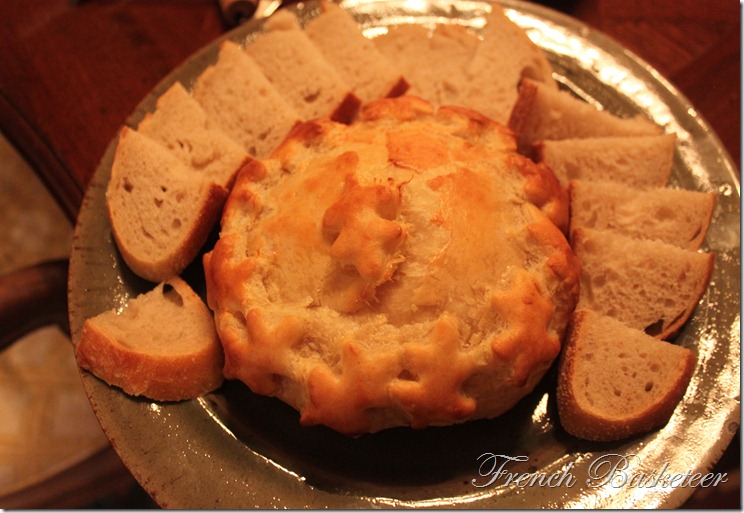 As we prepared to sit down, the room positively glowed~ 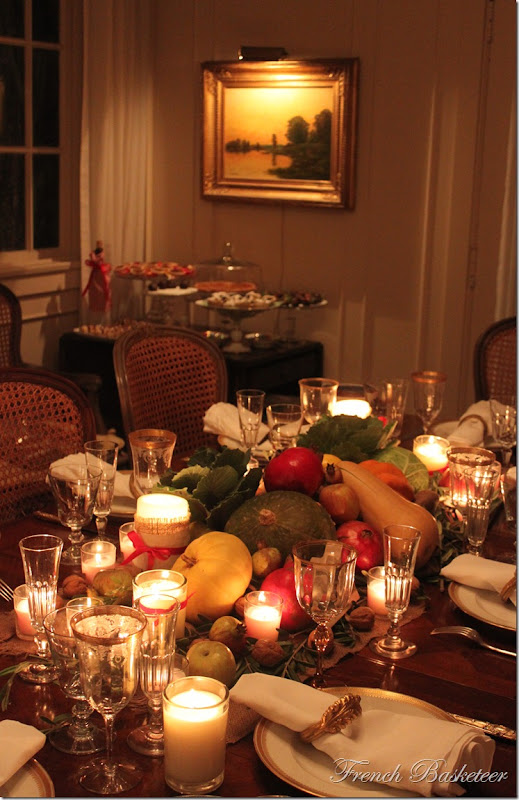 If I did this again I would layer in even more “stuff” including some grapes, but for eight of us, this was fine; crystal, candles, shiny, fresh…..it’s one thing to have a nice table, but even better to stay nothing on it will go to waste and I spent an additional $2 to make it happen~ 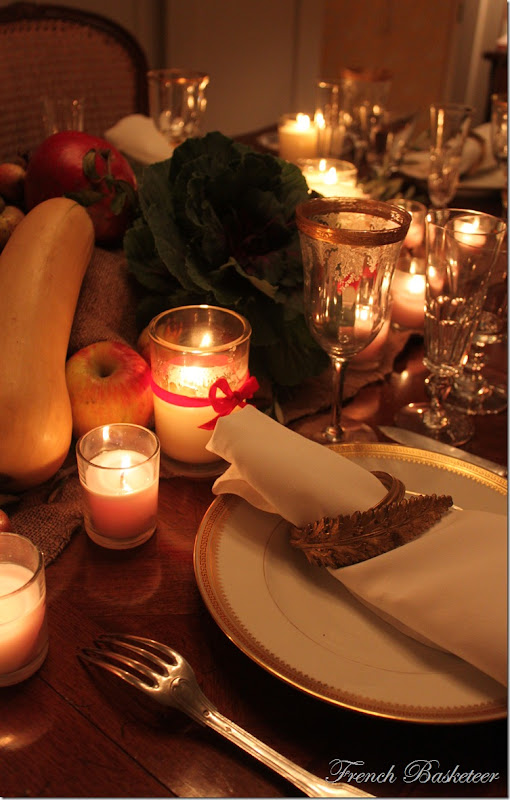 My brother-in-law M is our master carver, fine job again this year! 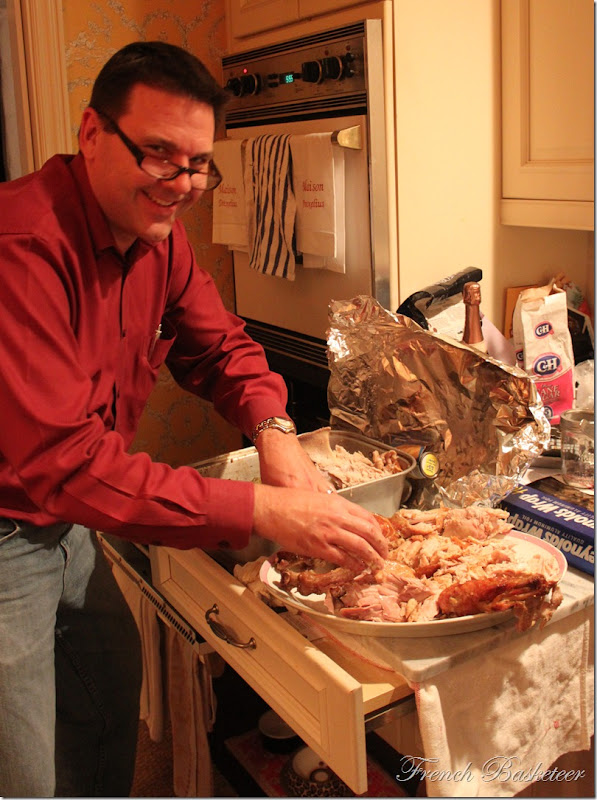 As we finally prepared to sit down, I ran around confirming seating, brought our traditional crescent rolls from the oven and smiled to myself….love to come to sit at my own table…. 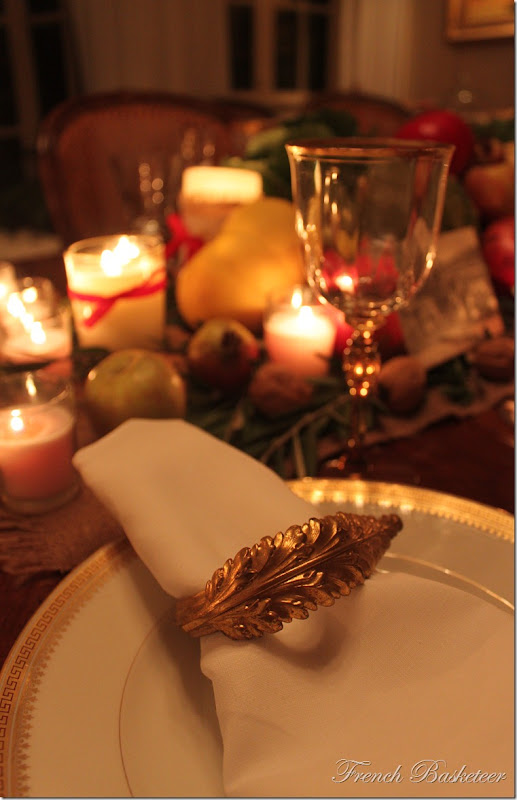 A short while later everyone was ready to move on to dessert, which consisted of individual mincemeat tarts~ 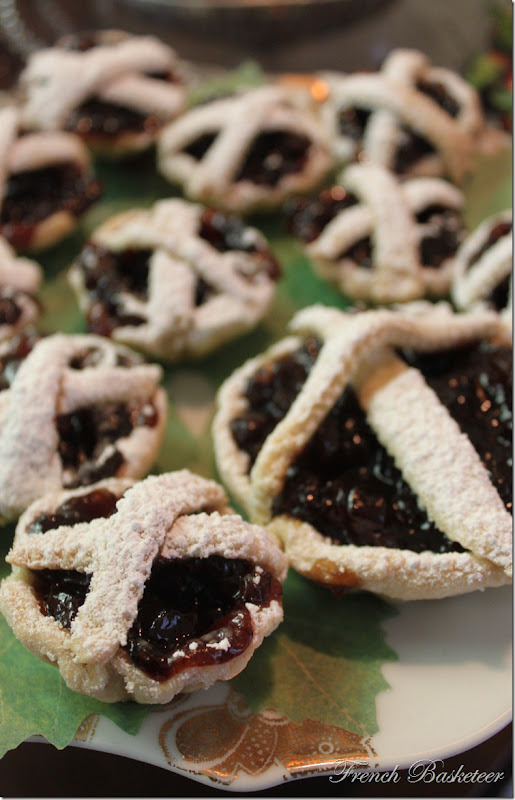 Scratch pumpkin tarts; I ran out of paper doilies, and so used green paper leaves on the mincemeat, and here used rose petals from the garden for the pumpkin tarts; it worked; I served each tart on two rose petals….I will try this again for a romantic dinner or Valentine’s….with something else as the pastry. 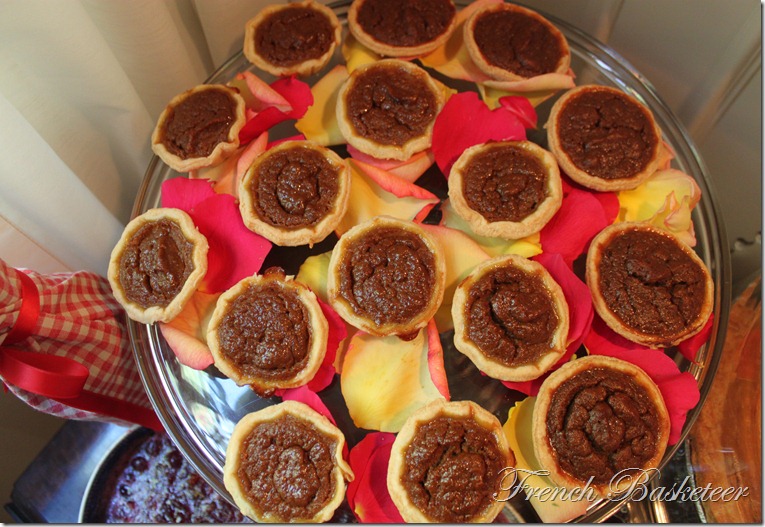 Remember the strawberries I showed you from Chino Farm last weekend?  I ended up buying the long-stemmed “French ones” as they are smaller and very flavorful, though they are more pink than red.  I dipped them in a melted bar of Valrhona from Trader Joes; Excellent~~ 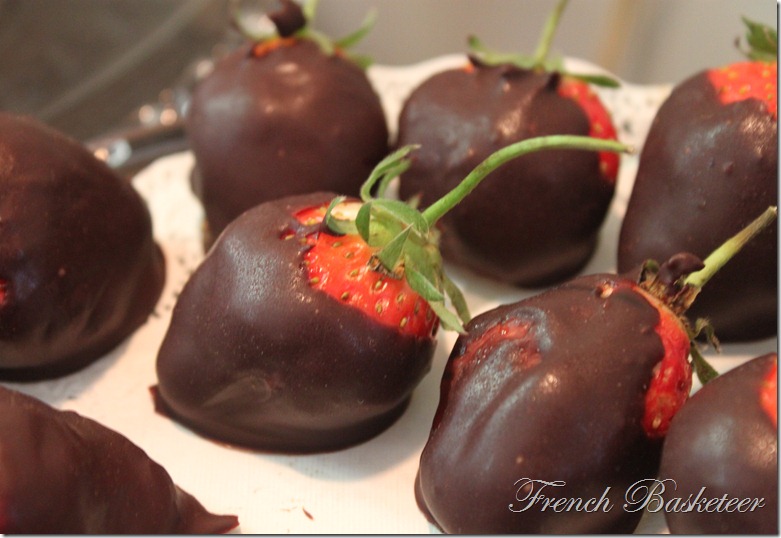 Following dessert, the table was a blend of shades of red, candlelight, and glass~ 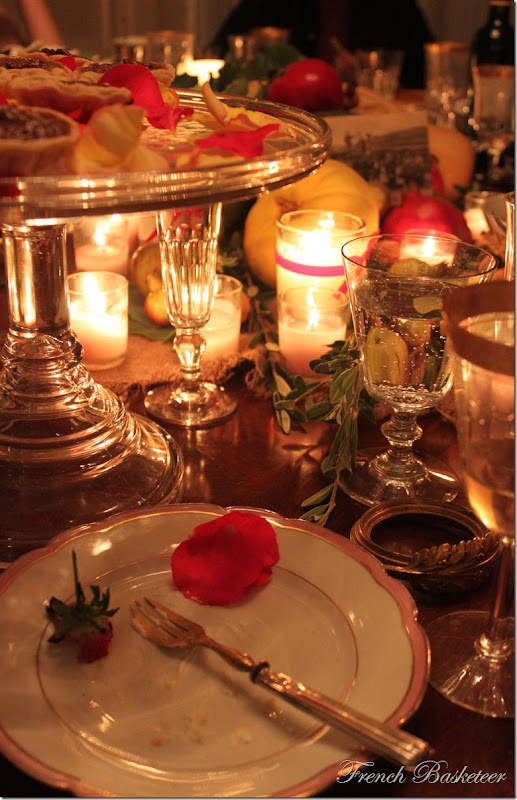 The Paulee post card was tucked in to the tablescape; though no one commented on it, it was my tie to France for my Thanksgiving~ 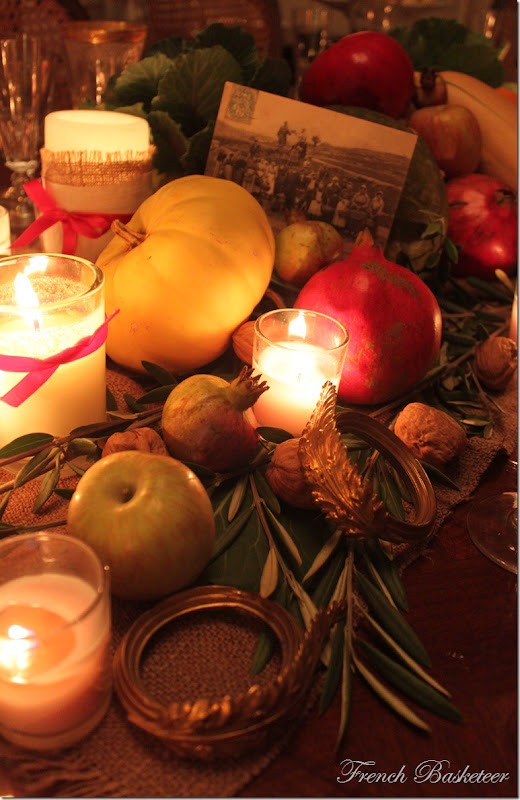 A fine meal, a fine evening.  My nieces who are away all phoned to ask me how to make this or that and to tell me they want cooking lessons for Christmas.  I plan to be in France just after Christmas, but we will have another turkey or a second Thanksgiving before year end. 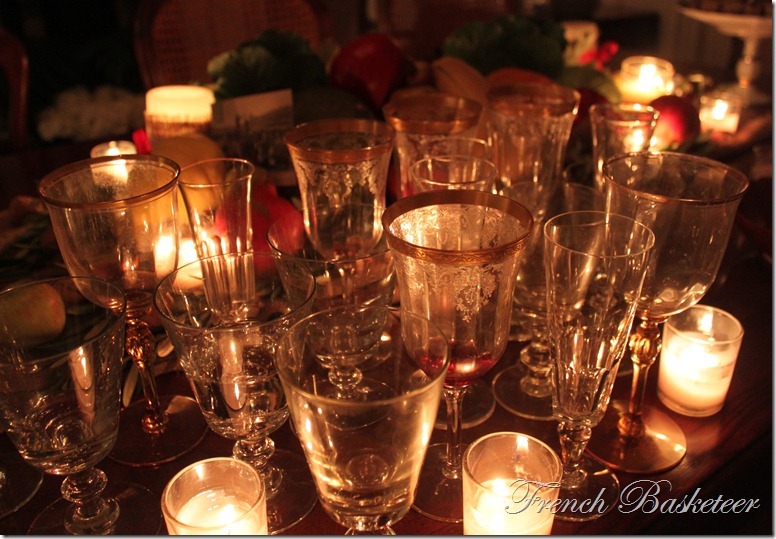 Wishing you all a lovely holiday weekend~