There are some foods that you eat that you never forget, that if you taste them, bring you back to a certain context.  Eating that food again just transports you.

I was reminded of this last weekend when my sister was in town.  Two of my nephews devoured box after box of local strawberries.  My niece? Not one.  Sis says when her daughter was very young and had a hospital stay, the doctors noted they had given her strawberry flavored medication. “How could you!” my sister cried.  Since then, any whiff of strawberry is most unpleasant to little Lauren.

Cassoulet for me means Provence (the restaurant) on MacDougal Street in the Village, NYC.  After a long run, the restaurant changed hands and has sadly closed since then.  At the time, my BFF lived upstairs, and as regulars we were always greeted instantly, warmly and graciously.  There was a beautiful garden room in back, and a marvelous and bustling bar in front, with an enormous damme-Jeanne or demi-John at one end, one of the large green glass wine jars; it was perpetually full of the house-made orange wine, and after dinner favored patrons were offered a small digestif.  At some point I was inspired to find my own damme-Jeanne in France and actually made a large batch of my own orange wine, which I taste-tested against that of the restaurant.  I should make that in Beaune one day.

The food at Provence was amazing, and inspired.  It was at Provence that I first ordered a terrine of cuisse de grenouille, which was a specialty that night, in the company of a large and distinguished party.  Frankly, in my pre-French-speaking days, I had no idea what I had ordered, until the waiter asked me, “how are the frogs legs?”  “Delicious,” I said, without missing a beat.  I could have sworn it was chicken.  Many nights my BFF Andrea and I stopped for a light appetizer or just a glass, to chat about the day, our apartments were so small and did not afford such a comfortable atmosphere. On cold nights, nothing would beat an individual portion of cassoulet, served in its own small cassoule or glazed clay pot.  On a future trip to France, one of my first purchases was a large cassoule.  I have been making my own cassoulet since then, and testing and tasting across France.

And so, Cassoulet is indeed near and dear to my heart, by way of NYC not France.  I have eaten my share of it in France, but prefer to make it myself, and always harbor memories of Provence NYC.  It is a disappointment to call it “French Bean Stew” as many do….it is a meal in itself and there are thousands of ways to make it but I find it always satisfying to make and to serve.  My family happens to love it too!

I decided to make it recently after I found these marvelous white beans at San Diego’s premier Chino Farm.  Aren’t they beautiful beans~ 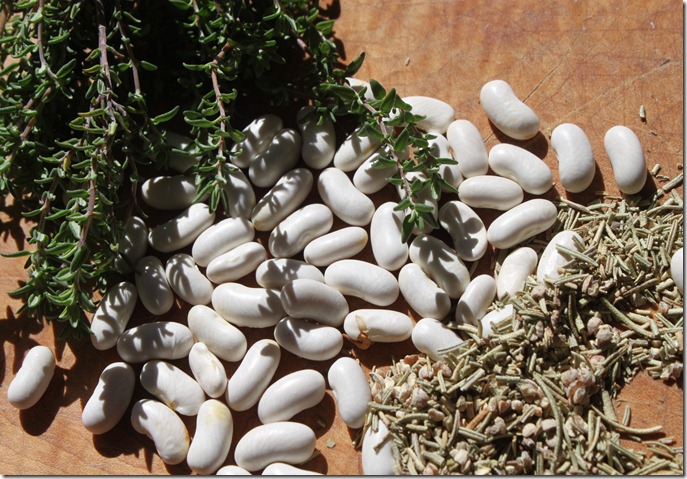 You will find endless variations of Cassoulet across France and Provence and the Languedoc, each varying from town to town and by region. The number of steps to most of these recipes are positively dizzying!  I can not source the same pork cuts as in France, and using the pork cuts and pork rind from the Chinese market was a huge project which was not justified by the end result.  So here we have to improvise. I have simplified the recipe, but it is still delicious…and so, here is my U.S. cassoulet recipe~

Set a cup of white beans in water overnight the day before. Of note, the French say these should be local and no more than one year old.

Take six of the thickest bacon slices you can find, cut in to 1/2” pieces and boil them lightly to degrease and remove the white chum that results from the boil.  Rinse, drain and set aside. Very Julia Child, as she likes to make pork this way.

In a pot, set an onion studded with a dozen or so cloves (I do this too for chicken soup); add the par-boiled bacon pieces, several bay leaves, a healthy amount of fresh thyme and a few tablespoons of herbs de Provence (see pic above) and let me know if you want some HdP I will send you a tube from Beaune~ 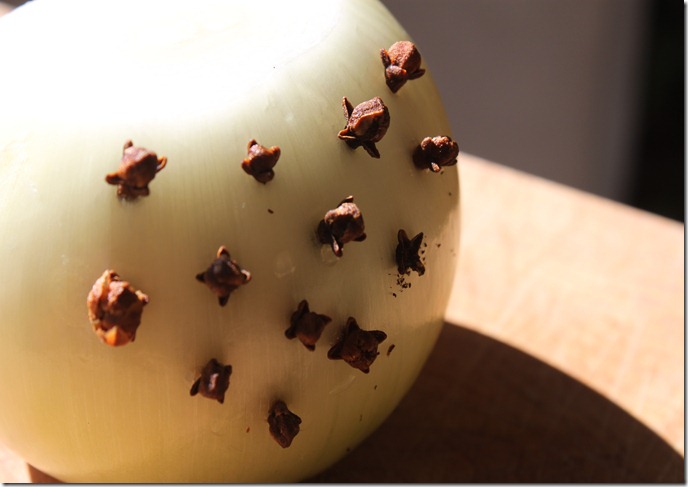 Add in five medium sized  crushed garlic cloves and the top of the white part and most of the greens of six leeks; sliced into small rounds; these are from my garden and so pretty small~ 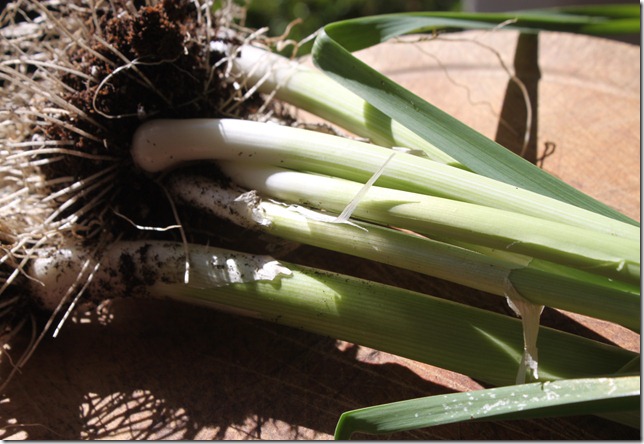 Add the pre-soaked beans; I added a few tablespoons of homemade tomato sauce (or a whole tomato; try to avoid a half can of diced tomatoes!)  to that mixture and let simmer for 2-3 hours.  You are making a sort of a stock, but with beans.  You can add other aromatics like a few carrots if you like.  Don’t cook it too hard or else the beans will fall apart.

Meanwhile, prepare your meats.  I use several duck legs, brown them in oil first and set them in the pot; the French use duck and pork and sausage for this dish; sometimes I have added in chicken but the duck really holds together nicely after a long cook~ 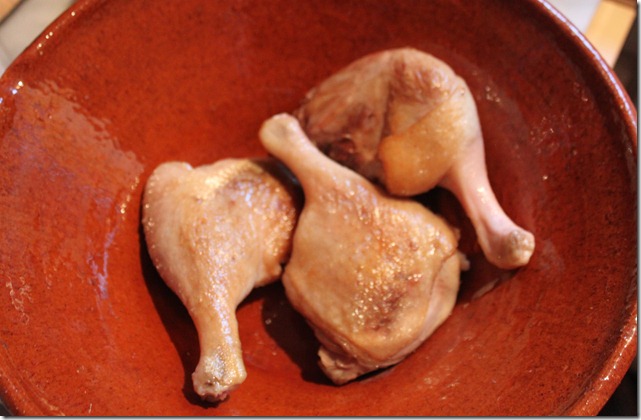 Remove the duck legs and brown a few sausages; these are Bristol Farms Garlicy, Toulouse-style sausages, but use whatever you can find that is good~ 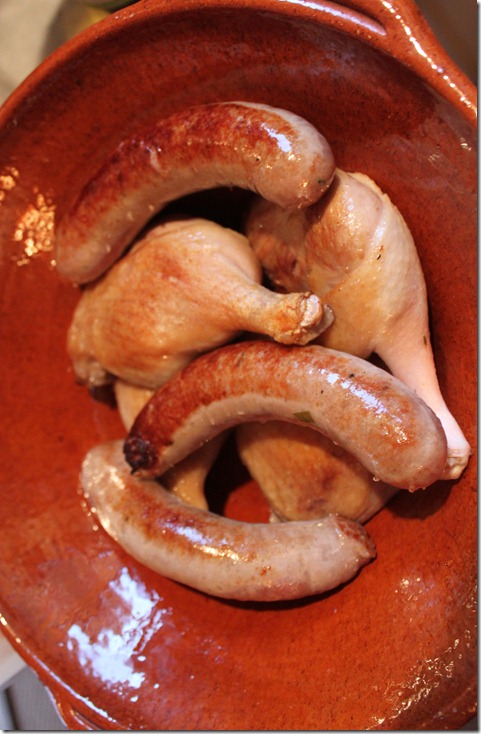 Pour your mixture of beans and herbs and leeks on top of the meats, removing the whole onion that was studded with cloves and the bay leaves~ 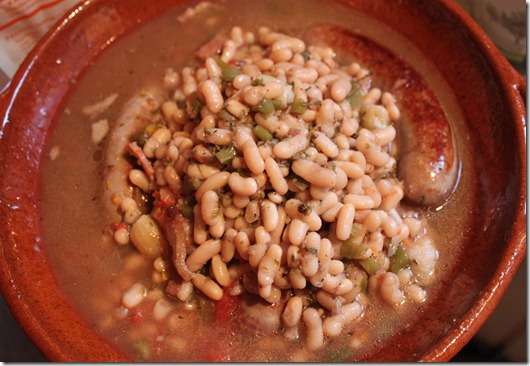 spread out the beans and stuff…. 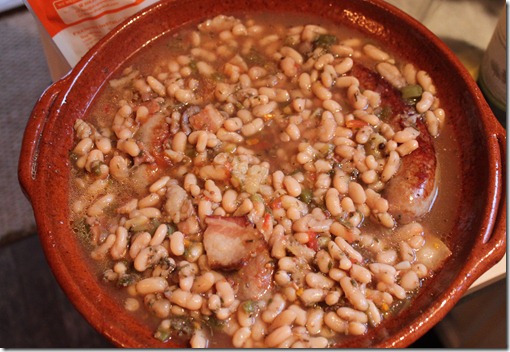 bake at 375 for 2-3 hours with a foil cover…the meat is tender, falling off the bone.  You can sprinkle with bread crumbs at this point and put under the grill.  I cooked it again without the foil on top for another 45 minutes with bread crumbs.  Whatever, it’s all delicious~

I wonder if this looks as good as it tastes…..but I assure you it does! My family ate it all on Saturday night! 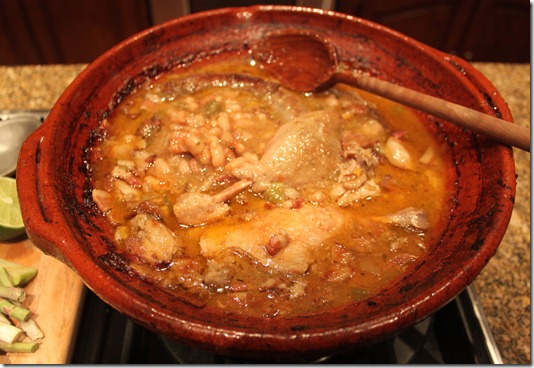