The Little Back Room

Our home was built in a different era, almost 90 years ago, 1923.  It included what were called “servants’ quarters.”  Today I suppose a nanny room has replaced maid’s quarters.  Our house has a pair of rooms with a bathroom in the middle, with a separate entrance, which were rentals in the 1960’s.  The Postman who now lives down the street rented here for a few years, and he tells me stories of how people used to sneak on the property and jump in the pool in the middle of the night for fun.  Back then, he says, when people asked where you lived, you only needed to give the house number, not the street name.  Everyone in town knew the rental and the house.

The original estate was a larger, grander property, some of those lots are now developed into other houses.  The builder, Hiel Rider, was a founder of the Laguna Beach Garden Club and refers to his gardener in some local newspaper articles.  I assume the gardener and perhaps his wife might have stayed here, in this suite of rooms.  The entry doors have been sanded here for painting by me.  There is a story behind the mismatched doors I will tell you later~ 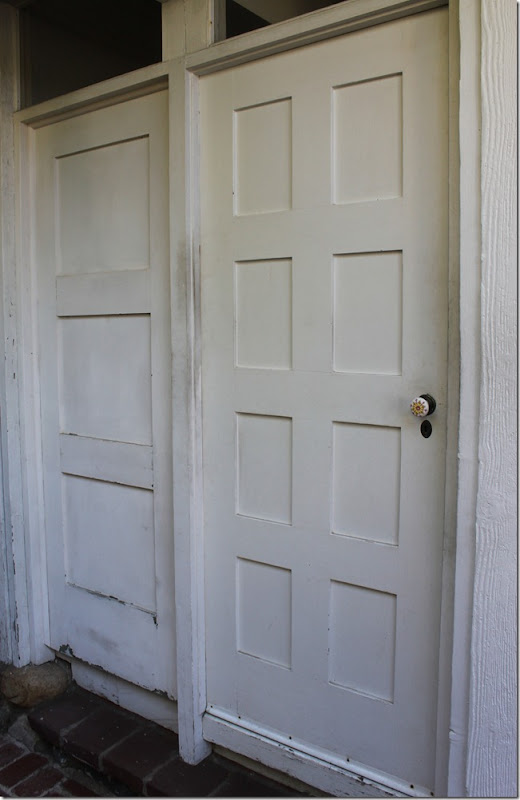 In 1970 when we moved here my Dad immediately seized these two rooms for his personal space, the front room for his x-ray film reading and the back room for books and storage.  The Danish Modern bookcases from our “old house” went here, which my parents brought back from their two years in Germany in the Army a decade earlier.  Hold on, you left the Austin Healey but brought the Danish teak??  Yes, they still wish for that Austin Healey.  Nevertheless, having no place in the classic Mediterranean house, the teak shelving ended up here~ 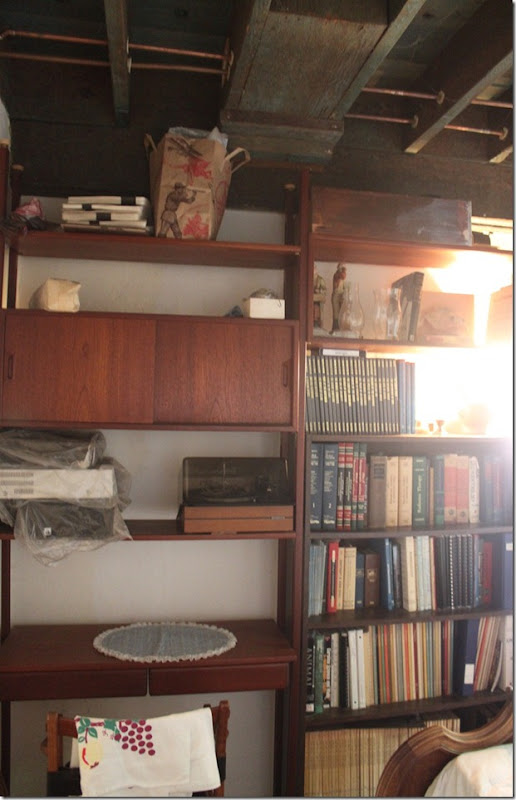 The adjacent bathroom was repapered by Dad in 1970 in some kind of moire he liked…? I will tell you about the tiles later~ 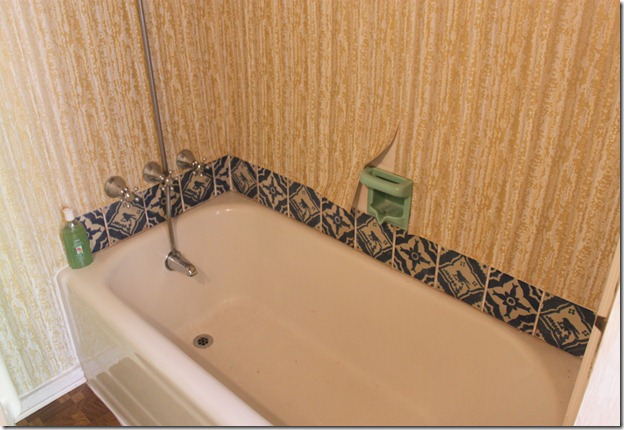 Back the bedroom.  The beamed ceiling was finished in 1923 and given a wash to match the exterior trim, which was a slatey blue.  Many of the windows and other wood trim were finished in a mustard yellow, including the windows to these rooms.  If you get up on the ladder, this wash is very pretty green and blue, but from down below, it has always seemed very heavy to me, in a room that already gets mostly late afternoon light.  Nice and cool though, with the stucco walls during the hot days of the year.  A few months ago I moved the book shelves out and put my French bed in the room so that this could become a guest room, specifically for my friends Marge & John when they came to stay for several weeks~ 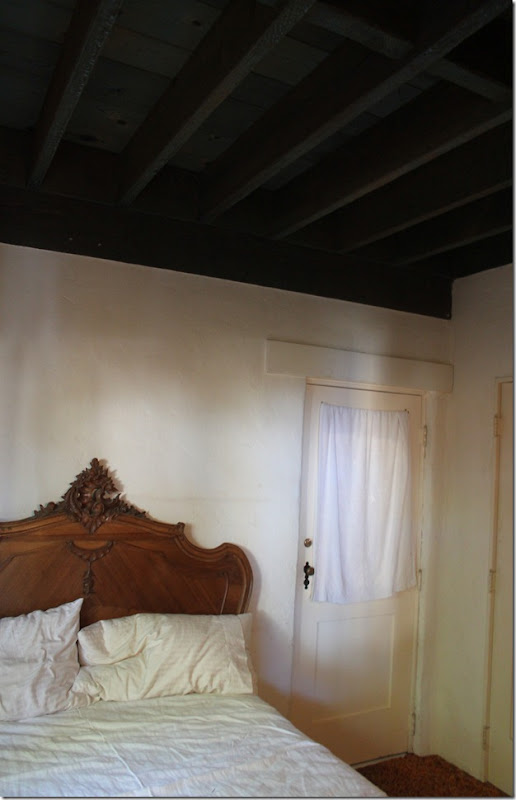 On another wall are two windows, which were covered by Dad’s 1960’s black and gold drapes that matched the fabric on the door above.   These drapes went bye-bye a few months ago in a garage sale….much to my family’s surprise, someone paid me $20 for the set; the rest of the stuff in this room is in the garage now, including the teak sideboard~ 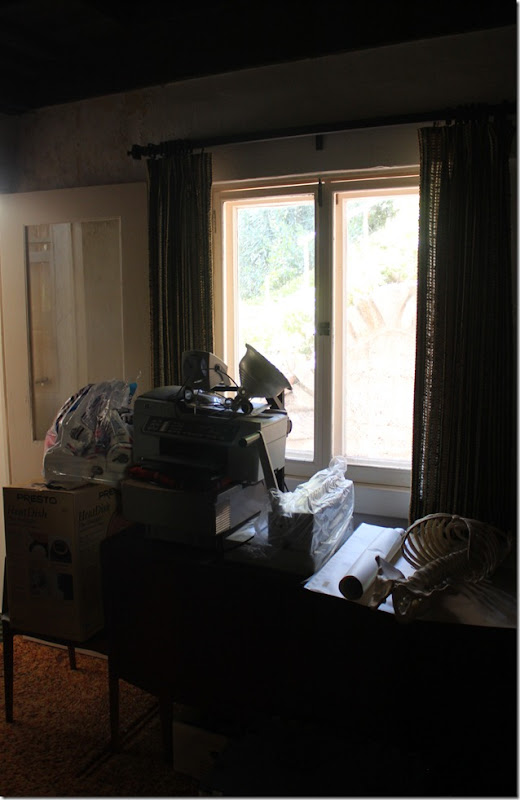 Minus the drapes~ already better! 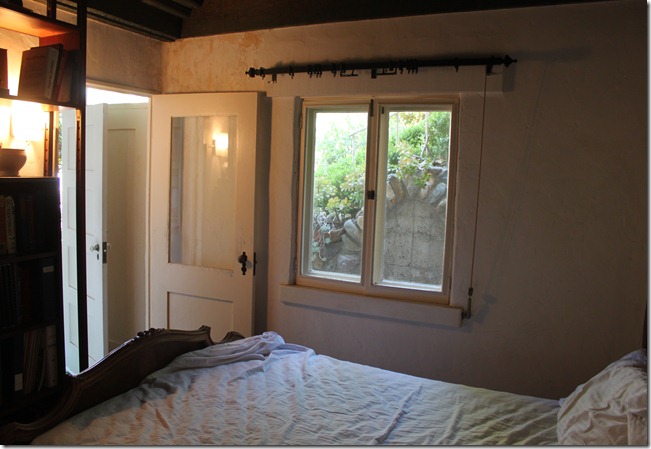 In forty years, even as a child, there has not been a single time I went into this room that I did not wish that it could be made to look pretty, to look better and lighter.  The subtitle on this post is My Fantasy Project….John & Marge’s visit was a great impetus to start the project, but I felt I then needed to finish it, and with my Parents’ permission, I got to work.  I decided to do most of the work myself, and to use what I had on hand.  First up, paint the ceiling beams; there were two coats of primer.  I invited my family to come help for Memorial day and several of my nieces came to paint….so we got to work~ 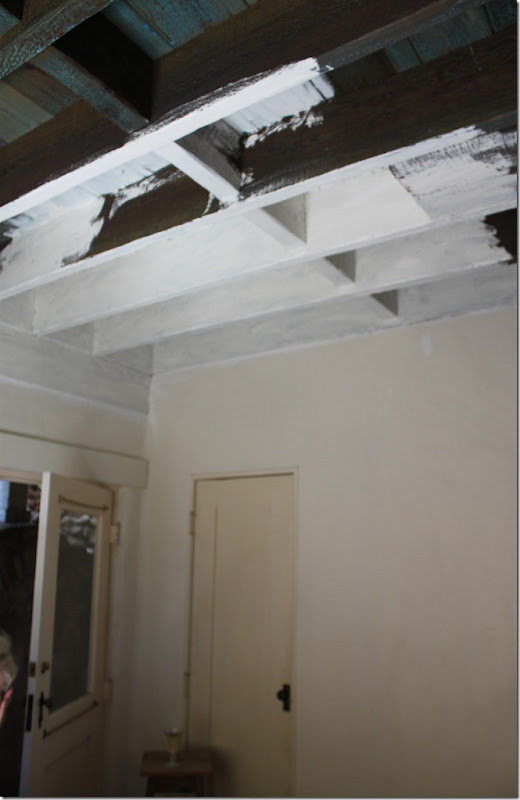 One thing I should tell you is that I am almost fully ambidextrous.  Which also means I can not tell my left from my right unless I think hard about it or I form my left hand into an L.  This is great for painting though; the girls asked me how I could paint for hours on end…well, when one arm gets tired I just switch to the other one….this was almost two weeks of work part time.  I wanted a chalky white finish and initially thought of white chalk paint, but ended up with Ben Moore Regal paint in white; it is fine; after some patching and finishing on the beams, the walls were painted an eggshell white I had on hand.  Here is the general look now….the walls photographed more yellow in this pic than they are, but isn’t it better? 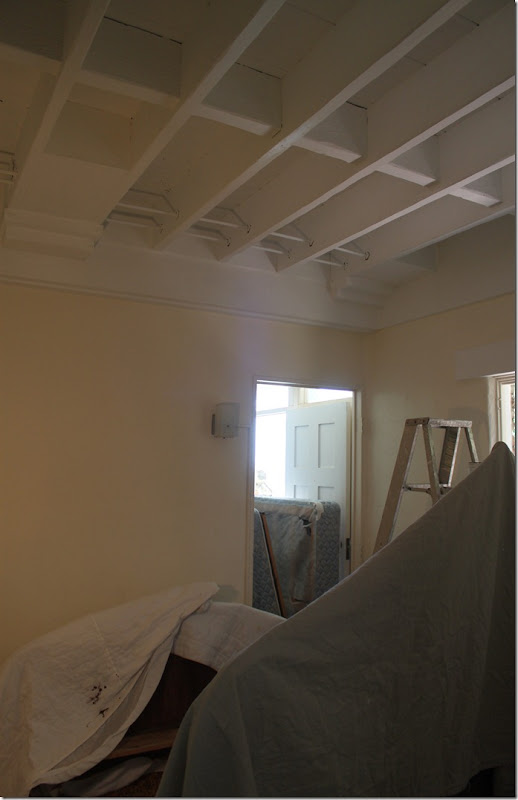 Though you may not think of me for DIY projects, we are going to have a slightly French bent to these rooms….look for a series of posts here on improvements and ideas with French inspiration….

Next we move on to the flooring~