Two glorious weeks in France felt like a month.  One week home feels like four, as I arrive to deal with all I have to contend with on a daily basis.  I took Mom for her written driver’s test for her license renewal, and she failed it, not once, but twice the same day after she insisted she would pass the second time.  She has an extension through February, and we are now reviewing the driver handbook and talking about signs and rules as we drive; she only has one more chance to take the test, and she knows it’s important that she pass.

As year end approached, I couldn’t help but feel like 2012 went by in a blink, faster even than the previous years, which I thought were already a blur.  I chatted a little with Jean-Luc about caring for my parents and how quickly the weeks pass.  His theory is that as we age, our memory banks fill up, and so time seems to accelerate.  He says that his gauge for how quickly the days go by is the sugar bowl.  Each morning, he has a bowl of strong coffee with three sugar cubes.  No one else is in the sugar jar but him, and each day it’s one-two-three lumps.  And suddenly, the rather large jar of sugar cubes is nearing empty.  Have the days gone by as fast as that? 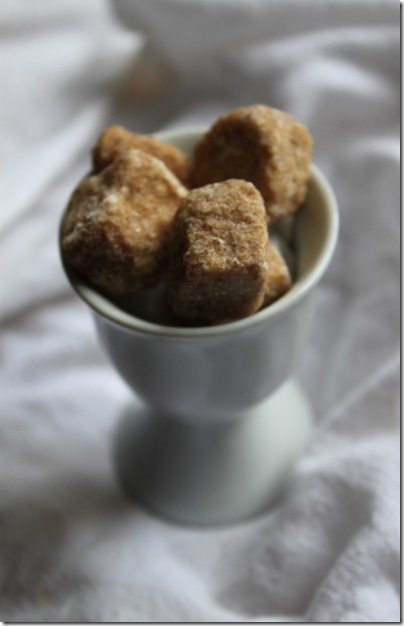 I suppose they have.  Mom had another birthday yesterday, New Year’s eve.  I set the table for a buffet dinner, and agreed with my sister that we would begin our meal between 5 and 6pm, not too late for Mom & Dad~ 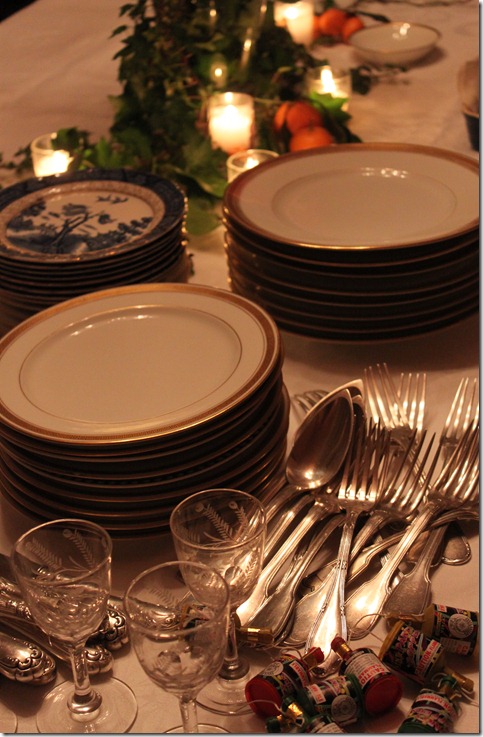 If you look at the table and the menu, you will see that I am missing France.  A few pretty pink flowers for Mom, but mostly lots of ivy from the garden (so French, Cedric confirms) and pretty little mandarin oranges~ 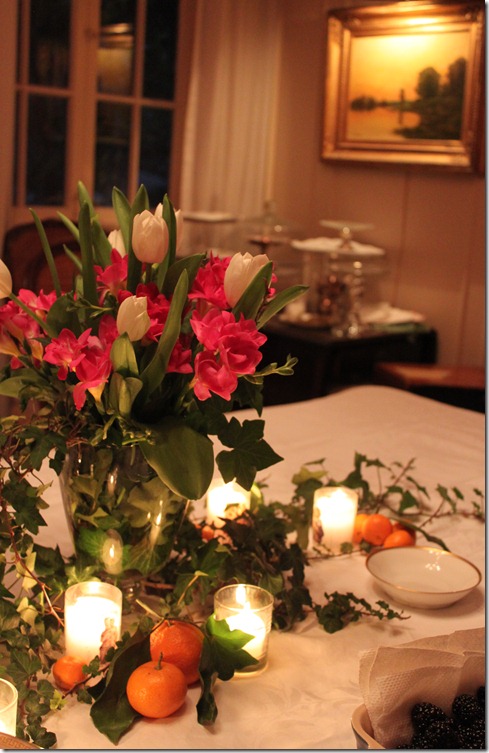 I had two of my nieces come over in the afternoon to help me cook, and with a little instruction, they produced some absolutely perfect sea salt caramel turtles~ 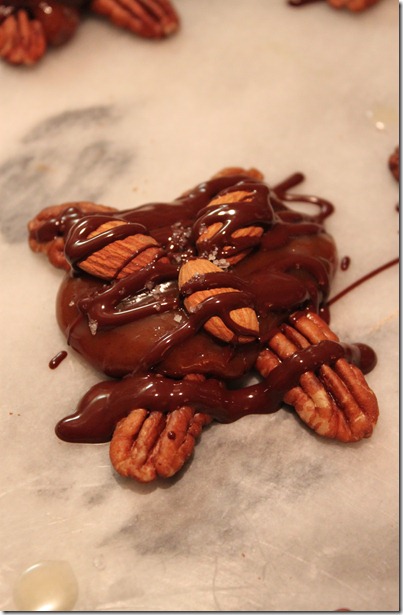 These were a big hit; the caramel recipe we used is HERE; I chose it because it uses honey and not corn syrup.  Nicole was proud of her work~ 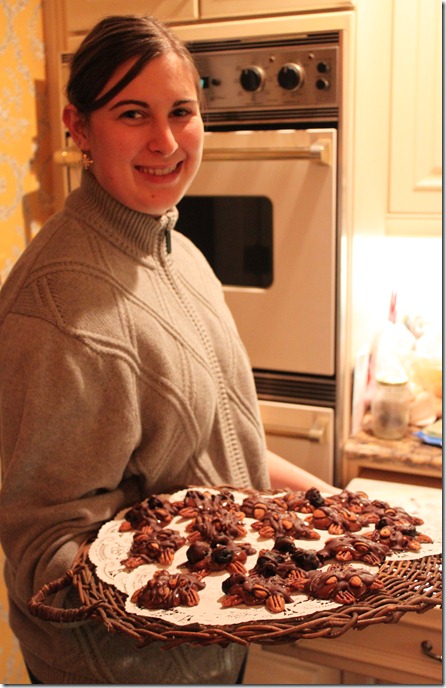 I’m still dreaming of the Coquilles Saint Jacques in Beaune, so we made that too, using about five small bay scallops per shell instead of one large scallop; these were also popular~ 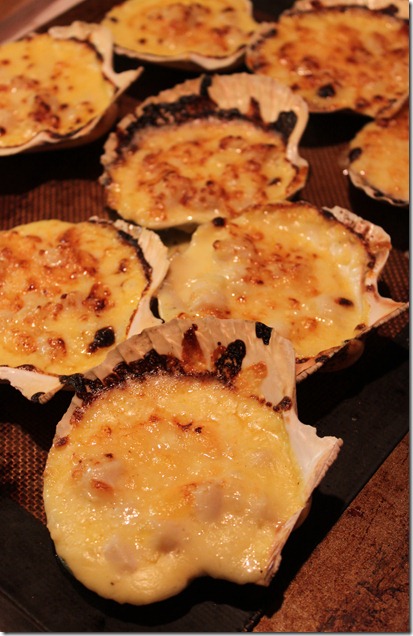 Well, let’s say they were popular when the my sister and the rest of her family finally arrived, at 7pm.  Yes, tardy, so they got reheated gratineed shells.  We did tell them “not to rush” and the girls and I were still cooking, but I never understand how those hours get lost.  And as usual, I had lots of food, and ideas of stretching the evening into a four hour meal as the clam chowder, then scallops, then shrimp, mache salad and pommes Dauphinois and moules frites and finally dessert emerged from the kitchen.  But there was the usual frenzy of eating, and an hour later everyone was in the desserts and sampling the turtles, and then we watched the ball drop in New York and everyone was ready to go home or to a party.  What’s wrong with me, will I never learn? 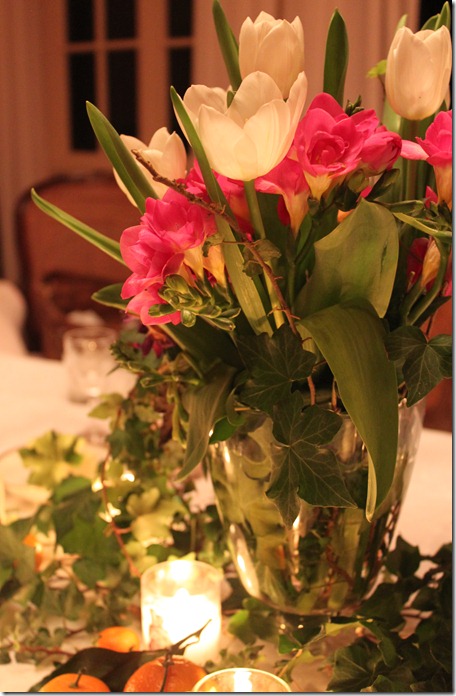 The girls were my best guests, sitting in the living room between courses and looking at my wedding cake book as we talked about Nicole’s wedding in 2014.  And clowning around with the glasses I got at the 99 Cent Store~ 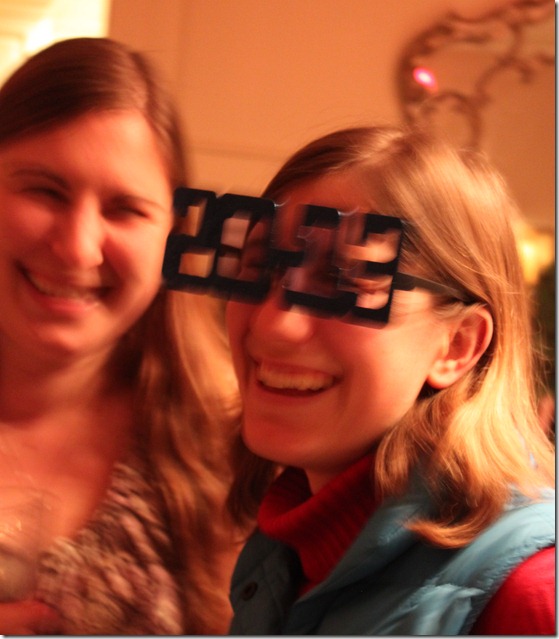 This morning is another day though, and for breakfast we had birthday cake (white cake imbibed with Kahlua and filled with crème Chantilly and cassis jam from Beaune), leftover cremant with scrambled eggs and the last of the potatoes, and then late morning, the chocolate fondue we had intended for the night before: blackberries, pineapple and strawberries dipped in chocolate and sprinkled with coconut; my parents were very happy to have eaten this~ 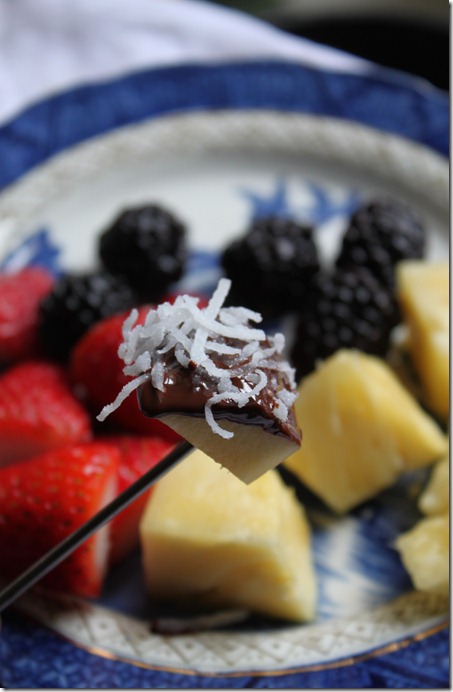 And in the end, of course, that’s what it’s about for me…Dad loved all the food and ate when he wanted; Mom had a fantastic birthday and enjoyed the atmosphere and the company, no matter what time they showed up.  She was especially happy to watch her granddaughters at work in the kitchen.  For lunch today we are having moules frites and then for dinner a roast chicken with stuffing.  I’m puttering around with various plans and projects for 2013, and finishing off a few more blog posts from France.  This will be an exciting year, and I hope it does not zip by too fast!