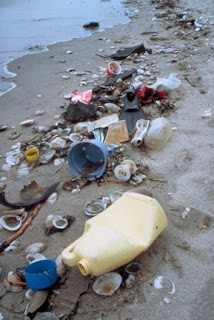 I have a board at the markets, Look Who's Banning the Plastic Bag. It's a growing list of municipalities, cities, regions and countries around the world who are either considering or have already moved away from plastic carrier bags. People always stop and read it...it gets them thinking. The list of who is considering a ban has more than doubled in the last year. A lot of people then ask, if so many cities in California are considering a ban, why aren't there more cities with bans in place?
The short answer is that if a city passes an ordinance banning plastic bags without completing an Environmental Impact Report ("EIR," proof of sorts that the plastic bags are indeed bad for the local environment), the city can expect legal action from the plastic bag industry. Between legal defense and costs of the EIR (estimated to be minimum $30,000), this sounds like a headache to a lot of would-be bag busters.
The great news is that the State of California Ocean Protection Council voted last week to produce a master environmental assessment ("MEA"). The MEA will serve as the basis for local EIRs by California municipalities, saving time and the expense of producing individual EIRs.
The MEA should take 6-9 months to complete. The expectation has been that once the MEA is done, many municipalities will then move forward with their own EIRs and eventually, bag bans, which would take 6+ months to implement.
More on the California Ocean Protection Council later this week.
Posted by French Basketeer.com