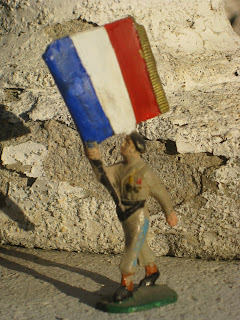 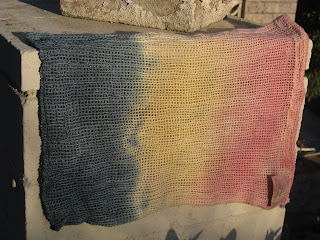 I've been waiting for the perfect embellishment for the net (produce) bags. Stencil? Dye? I have talked to several dozen folks about the concept over the last year. Today I got an enthusiastic answer: tie dye! Tie dye t-shirts were part of the offering today at The Ecology Center, and I was right next to that booth and so got to watch what everyone was doing with the dye. Someone had the great idea to try a net bag in the dye. Soon there was a row of them on the drying line! I was amazed how many people said they were already using them (and wanted to buy more). Unlike say, Glendale, this crowd totally gets the net bag concept.
Kristin and her team took to the bags and they came up with a few really cool designs. I have commissioned her (of sorts) to color a few bags in a way that would be commercially viable (e.g. for CdM) and also tie dye. Maybe something like a pretty pink bag, or green bag. I'm going to have to take some samples around and see what people think. It's sure to provoke discussion.
Tie die can be like a Rorschach test. What do you see in a tie dye bag? Moi, I see the French flag, or drapeau, if you turn this bag on its side. Eh oui, they don't call me the French Basketeer for nothin'! I don't know who dipped this bag and if they had the French Flag in mind, but I thought it was pretty cool. I picked up this little soldier at a brocante somewhere in France, and he came off the shelf to reinforce my point.