Santa's Arrived, in a Fur Suit 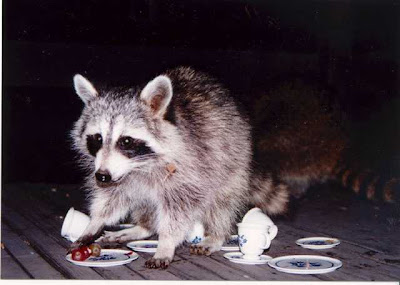 Honey woke me up with a few clucks tonight at 1am. I immediately heard the same strange noise...something... chewing on plastic...? We crept down to the kitchen and turned on the outside light, at the gate. Nothing. Hmmm. Suddenly, there was this year's version of Santa, a large raccoon, standing on its hind legs, begging, looking at us, in front of the kitchen door. Another light on, but I couldn't get the camera for a photo. Honey was beside herself! The 'coon had been chewing through the plastic of the bag of potatoes Mom bought today for Christmas dinner, sitting right outside the door.

Soon, there were 3 large raccoons at the gate. Looking up the stairs at us, while Honey watched intently from my arms. OK I confess, every Christmas eve, we have seafood; tonight shrimp and a lobster. Throughout the year, I bury shellfish remnants in the compost far away in the garden, but on Christmas eve, I leave the box of shells and discard on top of the compost heap, for the raccoons, which I call our Critters. It's my Christmas Gift to the Critters.

Anyway, I threw a few shrimp, one at a time, out the door and down near the gate. Each time someone got their little hands under the gate to grab it, or squeezed in around the gate to retrieve. Each time I then saw three sets of eyes waiting, watching, begging.

My friend Susie has wild raccoons she feeds in the middle of Long Beach. Stephanie used to have a pet raccoon in Florida, until it dismantled her kitchen, completely. Napoleon also met Mommy Raccoon with her 5 kits here at the house in a tree stump, until she took a quarter-sized chunk out of his cheek. They are fascinating and clever creatures but I don't want to encourage them, unless it's Christmas eve....

Anyway, couldn't go back to sleep so I have been wrapping presents the last 3 hours. Photos of those tomorrow.....bonne nuit and Merry Merry Christmas!!
Posted by French Basketeer.com