I am getting ready for the weekend and tomorrow's dinner for Dad & Honey's birthdays. There is nothing much going on in the garden for table flowers. Seems like something should be going on, except it is a true Mediterranean garden in that in summer is things are taking a rest. I have few roses left, also oleander, lavender and lots of Madagascar jasmine aka Stephanotis, and always lots of greens. I have to see what I can find in the yard, then supplement with flowers from tomorrow's market in Corona del Mar.

I'm taking a break from burlap to use vintage sheets on the twin tables tomorrow. French sheeting is a whole world unto itself. Used yesteryear primarily for bedding, today you see it in use for household, kitchen, bath and upholstery, not to mention on my farmers market tables. Sometimes the dealers here call them "Nun Sheets." The range of creams and greys is pretty on their own, and the textures and weights vary greatly. I love the color and texture set off with more white, and the deep green of Madagascar jasmine leaves: 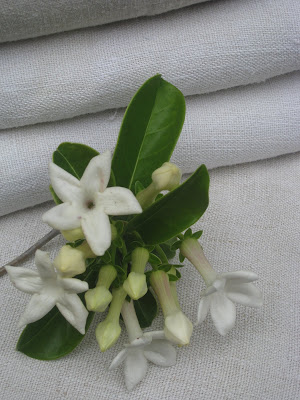 This pic really works for me; it's going to set the tone for the tables. I was going to do pink plates and export china, but I think we're going to go neutral. I'm thinking deep greens and whites on the neutral cloths now.

There are various fibres used for these sheets and seen in the pic above, including Linen/Lin, Cotton/Coton, Hemp/Chanvre and a cotton & linen blend called Metis, which is pronounced Muh-TEECE and is my favorite; it has the coolness of linen in summer, without too much weight. It has the softness of cotton and the durability of linen.

Linen of course is made from flax fibres. Much stronger than cotton or wool, linen was used for its antibacterial properties and resistance to rot and soil. It was the preferred fabric for dressing wounds as well as wrapping mummies.

In Beaune, I used creamy metis sheeting to slipcover the chairs in the dining room, skirt some kitchen and bath nooks, and plan a shower curtain of metis upstairs. Metis (or linen) will work great for a shower curtain because it is less absorbent than cotton (old French linen actually repels water). It's an inexpensive, all-purpose, durable, organic fabric. I made my original series of rolling cart liners out of metis too before I decided to move on to something else. Metis is as close a word I know to our word "hybrid" so you see it around the French language in reference to more than just sheets.

You'll often find sheets in poor condition and ready to be cut up and re-purposed, in which case you'll see them described as a coupon, just like the grocery coupons, from the French verb to cut, couper. I love the French language, but what is really interesting is how French words made it over into English.

Old French sheets were hand-loomed, which meant they were often seamed down the middle (made from two panels) and hemmed only at the top and bottom, not the selvedge. You'll often find nice little corner initials embroidered on them, to show who made them or who owned them, I suppose.

That's a very short word on vintage French sheets. Check back over the weekend to see what happens with the tablescape.