Today is Le Quatorze Juillet, aka La Fete Nationale Francaise and Bastille Day to Americans. If I have my facts straight, it has been a national holiday since 1880, to commemorate the fete organized by Lafayette on July 14th 1790, during the French Revolution, and on the one year anniversary of the seizing of the Bastille.
Long before there was an Eiffel Tower, there was a Champs de Mars, which is the park-like area that surrounds the Eiffel Tower. In 13 days time, Lafayette managed to get a crew together to clear the field and build a terraced stadium-type area to hold 100,000 people. Even in 1790, the French loved to party! Everyone across Paris, from every kind of background turned out, carrying banners or wearing the tricolore. It looked something like this: 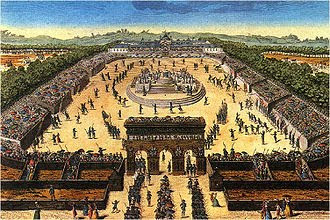 They held a Mass, had a military parade of sorts, with Lafayette also riding in on his white horse as leader of the National Guard. Louis XVI was seated in a large pavillion to view this grand soup. Everyone celebrated the new Federation of France, and sang together and sang slogans like Ah! Ca ira! 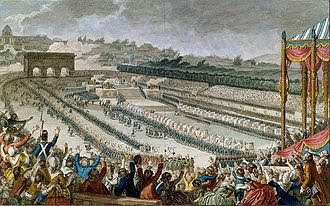 This was a motivated group, which had just watched their American friends declare independence from England four years earlier. Among many other changes during the period of Revolution, the people rejected the notion of an absolute monarchy and moved to a Constitutional monarchy. Two short years later, Louis the Last met the Guillotine, guilty of treason: 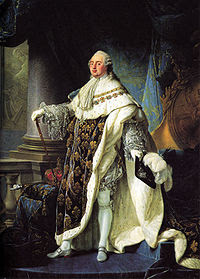 The party continues in Paris each year on July 14th, with a huge military parade or defile down the Champs Elysees; at night there are fantastic fireworks. It was always quite a show and a highlight of the year. Every branch of the armed forces turns out in the parade, even the Foreign Legion in full beard and "dress" uniform. Here are some photos of today's parade, grace a Le Figaro; seems it was raining in Paris today... 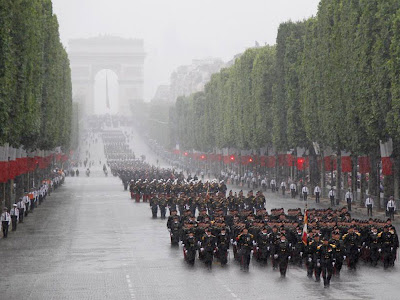 As is traditional, le President rides up the Champs Elysees in a Jeep to his viewing area before the parade starts. He receives other dignitaries there, and it's always the same sequence. In the case of the last year of Mitterand, he was so unsteady they had to tie his wrists to the roll bar of the Jeep; it was quite a sight to see. I like this pic of Sarko because you can see the setup of the bar; he looks especially happy today, doesn't he, in contrast to his companions? 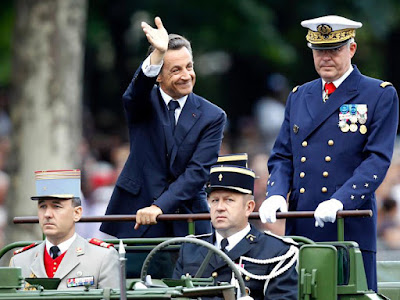 This year there was a large African contingent of the parade, to comemmorate 50 years of independence of the former colonies; this is Gabon: 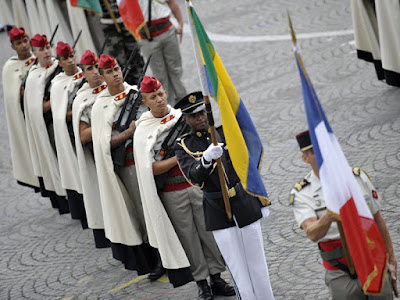 There is always aerial participation, but the favorite is the PAF or French Acrobatic Patrol, sort of like the French Blue Angels; this is a great shot showing how tight their formation is: 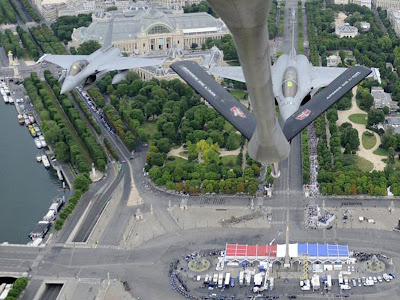 I feel dizzy looking at that one, but you can see Concorde below and the river at left, the Grand Palais in back; the PAF stream the tricolore in the air; a great crowd pleaser! 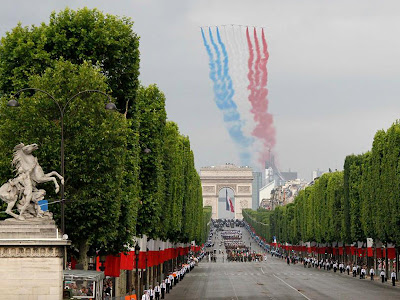