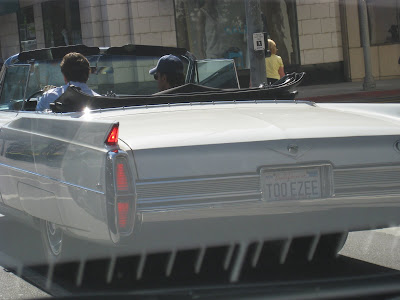 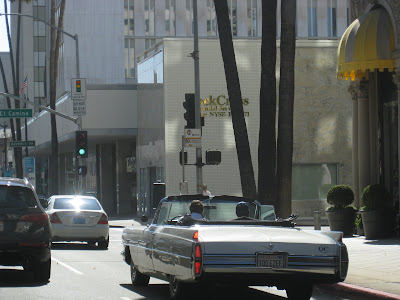 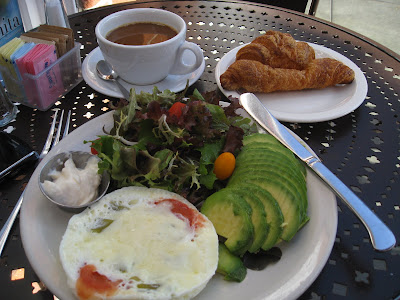 I was at the Federal Building in Los Angeles this morning before 7am to try to get my passport renewed. I have a firm appointment for Monday, but my sisters are highly concerned since I am traveling with their sons...so there I was.

The Gatekeeper was at a little stand in front of the door of the Federal Building. He wore a short-sleeved white uniform shirt (which showed off his multiple intricate tatoos), a crew cut and sunglasses so dark I could barely see his eyes. Before 7am. He was busy directing everyone which group to stand in; it was a real scene at that hour. Anyway, unless you are traveling in 48 hours or less, you can't just "show up" as I did.
Plan B was to go to an agency in Beverly Hills that will, for a small fee, process your passport same day. So this was my Procrastination Tax, I guess. I got to BH by 730am and had more than an hour to kill; luckily they have an international newstand on Beverly; unhappily they have no French papers (same as Brentwood) but they do have Paris Match, but not much else besides World of Interiors, which I adore. I skipped, as I'll get them there next week.
Down the street, I had breakfast at a coffee house, as shown, $13. Well, I guess I AM in Beverly Hills. Too bad the salad had a few yucky pieces in it. Ruined it. I am NOT in France. Anyway, I was struck by the smell of the entire street. You couldn't escape it; if I closed my eyes, I'd swear I was on 49th between 6th and 7th. The street had that indescribeable smell of dank, wet pavement, that probably had some kind of rotting food on it late last night. It's that early morning summer urban smell. Ahead of me, a building owner (I think) exited his Spently, with three uniformed engineers following on his heels, and ducked into a Class A building; I AM in Beverly Hills!
R is a film noir buff, and we've seen countless movies set in LA in the 40s and 50s. Must have been great when the density was low and could pickup the phone and say to the operator, "Crenshaw 2634 please". My mother arrived in LA in the late 50's and according to her it was always hats and white gloves.
The only glimpse I got of Old LA was this fantastic Cadillac de Ville (see the plate) going down Wilshire; I rode out of town through Blair Hills and the oil derricks, but I couldn't navigate the curves and take photos. Next time!