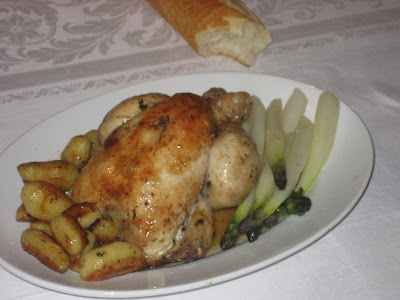 Passport: check. Camera for the boys: check. Julie and Julia: check.
I don't know if it was intentional or not, but I got annoyed at Julie around the time she pronouced boeuf as boof for the 17th time. As the French say: Aiie!! I would have rather seen a full movie about Julia & Paul Child with little or no juxtaposition of Julie & Eric. I adored the scenes of post-war Paris; why did we have to go back to Queens? Instead I had to watch Julie having a series of meltdowns in the kitchen with a little drama at the office thrown in, after coming up with the blog idea as a way to keep up with her overachieving and monetizing girlfriends. And Eric could not taste the food with the elegance of Paul & Julia, he always seemed to be stuffing it in his face and instantly commenting on it while still chewing the first bite. This was a total contrast to the opening scene, with Julia and Paul savoring sole a la meuniere filet'd a table.
A group of us went to see the movie, and we all had different comments. My niece thought the scene about the living Julia Child commenting on Julie's blog was one of a few unresolved ideas. My Mom said now she understood why I use so many pots and why I make such a mess of the kitchen that she usually gets to clean up; I dare say she is happy I have not been motivated to slice up 100 onions at one time. Me, well, in addition to the comments above, I am going to make boeuf Bourguignon tomorrow night for dinner, and will make a point to find a few fresh sole in Burgundy on the trip. In the U.S. we get sole already filet'd and we cook it. In France you get whole sole, cooked in butter and filet'd by your waiter at the table (a table). But in many restaurants, if you want to show your prowess, you tell the waiter that you will filet it yourself. This is a skill I will pass along to the boys, if the fish is in season. If I can find it at la poissonerie in Burgundy I will cook it at home.
The chicken, potatoes and asperges in the photo were cooked in Burgundy two years ago and all according to Julia's recipes; it seemed better than posting a movie pic or cover shot of MtAoFC. I seem to remember R saying it looked so good we had to have a photo...Bon Appetit!
Posted by French Basketeer.com