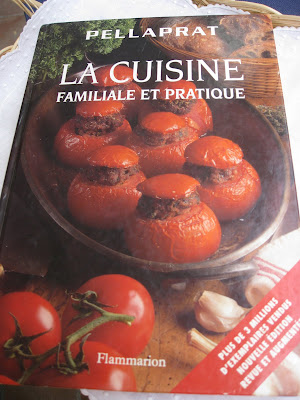 My list of things to do before the boys and I leave (one week from tomorrow!!) is growing short. 1) Get passport renewed. I just realized it has expired! An ironic downside to the basket business is that it has kept me from traveling... 2) get the boys a camera. When we were talking yesterday they said they didn't have a camera! I can tell they basically have no idea what they are going to see and do; they said it would be nice to have a camera to take pics of the architecture....well yes, but so much more. 3. Go see Julie and Julia, which opens on the 7th.

I don't have a lot of cookbooks, but yes, most of them are in French or about French cooking; I love the little Balthazar cookbook; also a few from Joel R and his foodie friend Patricia what's her name, whose pastry recipies I swear by. When I was in Paris, we spent a lot of time in the country, just outside of Paris. Sylvienne the housekeeper and cook prepared the most wonderful meals for us. I asked her what she would suggest for a good cookbook, and she did not hesitate with the one pictured here; it's very basic food, but with wonderful sauces and simple family dishes. I also use it for all of my canning and fruit preserves; not as much sugar, so you really taste the fruit.

But my bible among the cookbooks I have is definitely Julia Child's MtAoFC. That's the way it was abbreviated in some review I just read. I have a copy here and also a copy in France, one of the first editions. One of my friends likes to photocopy recipe pages for single use; her cookbooks are pristine! Me, well, I like to have that book out somewhere close by, and it might get a few splatters on it or a dusting of flour or cocoa. So my cookbooks are a little loved. The thing about MtAoFC though is that it's really tough to do some of the dishes here, souffles aside; the cuts of meat are different, it's very tough to find all the right ingredients, like Montmorency cherries. When I am in France, that book comes out and I REALLY appreciate it. Steaming moules frites (served in my big porcelaine blanche soupiere and coquilles St. Jacques (my niece Erin came back from France last month and said her favorite dish was seafood "cookies" something or other!) are two that I will make. I don't remember if I will be able to get scallops in August; they come in the shell of course, and I will take the shells back to Laguna for the garden and the scallops will be made according to Julia's recipe.

I'm getting hungry just thinking about it! In other news, Robert et Louise restaurant is closed for their summer holiday, from the 3rd to the 27th of August. So scratch that one off the list. There are dozens of other fab places to go, and I will be posting about all of it along the way!
Posted by French Basketeer.com