It's hard to get psyched up for the day when it begins with a speeding ticket at 8am. The CHP car was easily 20 car lengths behind me when I saw her, but it was too late. I always look for them, but today I had two produce crates in the front seat, that might have obstructed my view. The officer said I had "passed several cars" which were in the fast lane while I was in the carpool lane. Never mind that if you go less than 80 in the carpool lane at that hour you are likely to be mowed down; I generally think it's not a good idea to argue with CHP or any law enforcement, but I had my doubts when she said she ticketed me for going "75+" meaning that she had not clocked my speed, she just didn't like the idea of me going faster than the rest of traffic. I was irked that on the way home I saw a dozen people recklessly darting in and out of traffic. Whatever; I will see if I can fight it.

Today in Palisades we had a few celebrities I haven't seen before. Believe me, if you see Kate Capshaw (in a beret and sunglasses) with Steven Spielberg (in a cap and glasses), you know it's them; this is a stock photo, I would never ever dare to photograph a celeb at the market: 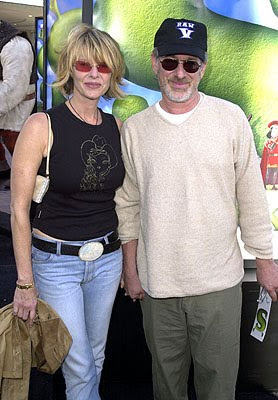 I had to ask Ronnie the Granola Guy to confirm, yes, it was "them."It's a real tip-off when two people are wearing a hat and sunglasses; they looked just about like this; Kate had a ready smile for me though they didn't stop; wonderful to see her so friendly, and even more wonderful that no one bothered them; in Brentwood, some A*hole would have tried to stalk them.

One of my Gardenia totes went by today, lovely as it was a year ago after regular use; she uses it as a tote and sometimes at the market; the chard was so lovely and crisp... 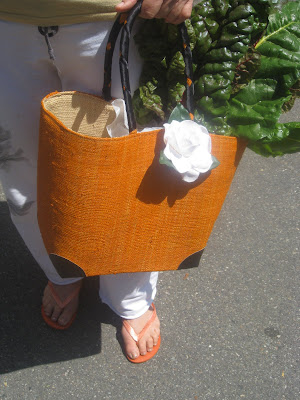 Giada deLaurentiis was also shopping today with her husband and little baby; same thing as the Spielbergs, she had on big Jackie-O style glasses, but no missing her; she really is tiny, 5'2"? Later in the day, the bookstore put out a sandwich board for a book signing with her. I don't know where she buys her produce, but she was empty-handed today as far as I could see, save the all-natural dishwasher products. 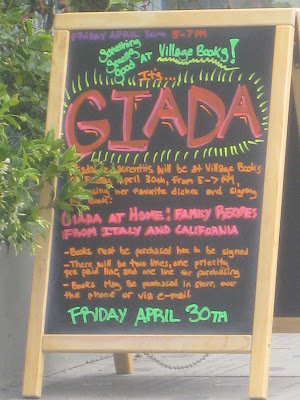 I saw one of my other regulars, who is "in the industry" and buys a lot of stuff every week. Does she cook it all herself? No, she has someone who prepares most of the meals for the week, all healthy. She does a little herself. It's a good life at this level on the Westside; to her credit, she is a lovely down to earth classy lady.

We also had a few other celebs today, including the Fire Department; always popular with the vendors. Here they are sitting on the wall in front of the cafe. Even the F.D. likes organic! 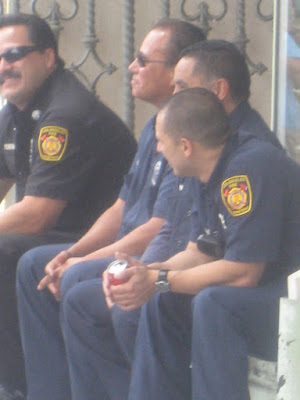