Before I post on my Memorial Day weekend, I wanted to share some photos of France. Bastille Day is the best equivalent of our 4th of July, but in France there are several days reserved to commemorate the military veterans as we do for Memorial Day. I think it is closer to home in France because battles were fought on their soil, and it was their families and livelihoods which were affected and towns wholly changed due to the loss of life and injuries and property damage; it's very real and still a little raw.

November 11th is the day the Armistice was signed to end WWI; of a global 10 million military dead and 8 million civilian dead, France lost 1.7 million people, or about 5% of their population. In WWII the global losses were much greater; estimates vary greatly but at minimum 50 million people were killed, of which about half are estimated to be military. Estimates for France for WWII are about 570,000 killed, or about 1.4% of the population. Compare that to 24 million Russians and 419,000 Americans. Statistics from Wikipedia. Amazingly sad....

The losses for WWI were felt more strongly by the France, and November 11th is a big day in France. In our town of Beaune, we have a somewhat somber parade, but even in the rain, everyone comes out and falls in line behind the band: 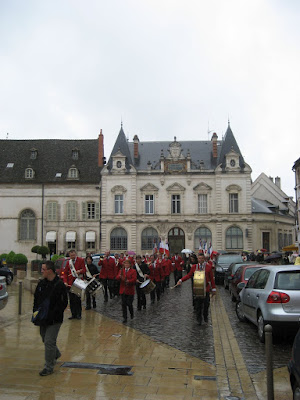 Which is dressed in red blazers: 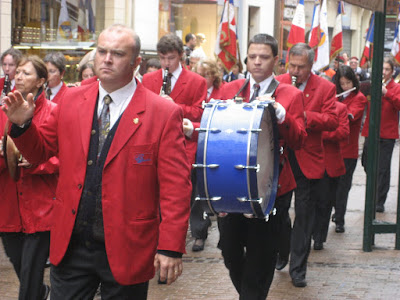 Behind the band come the military dignitaries: 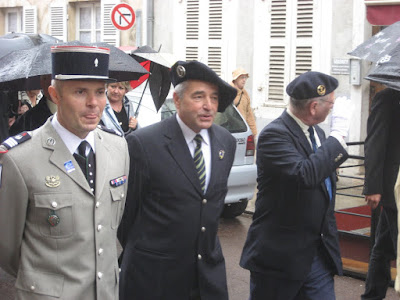 Then the veterans. All of them come out, with color guard and their uniforms and white gloves: 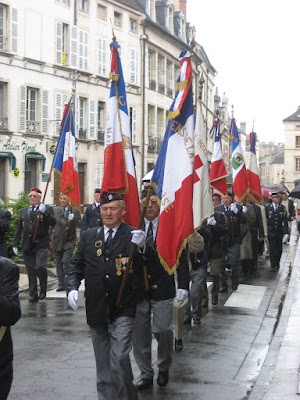 We end at the monument to honor the dead from WWI who have their names on the stone obelisk, which is elaborate even for our city; but you will find them in every town in France: 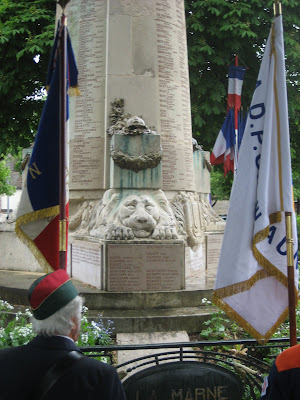 There is an eternal flame and flowers are placed in a ceremony: 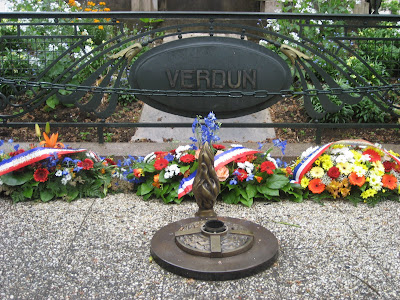 During the ceremony we have the dignitaries in their perfect blue felt kepi which signify they are graduates of the Ecole Militaire; no mind the rain falling, see his grey jacket, and the Mayor and others make speeches: 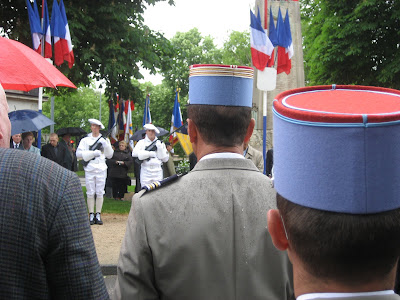 All groups of the armed forces are represented; the Navy, with their red pompom berets: 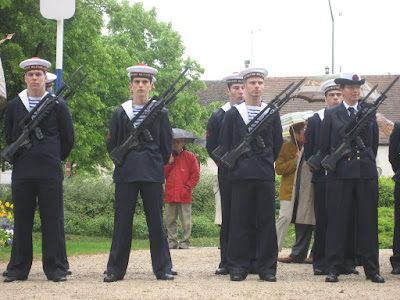 The Army; if they were Foreign Legion they would have White Kepis for dress uniform; or you would see them heavily barbed: 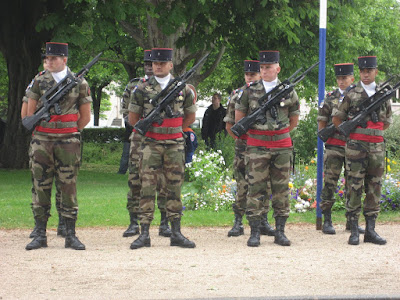 I don't know which ones these are, but they look fearsome with their automatic weapons; are they parachutists? 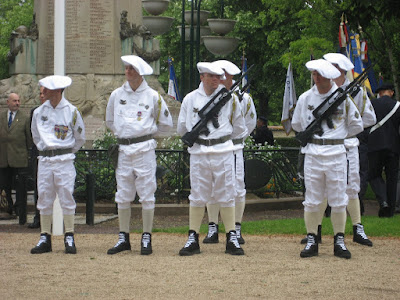 At the end of the ceremony, we go to the Town Hall nearby; there a very long table awaits you. There a few more speakers, in this case, small children read letters from other children dating to the post-WWI era describing their losses and heartache; it was very touching. The glasses are lined up as you arrive, but you wait until the speeches are done before you are prompted to take a glass of red or white wine, and have a cheese puff (in the baskets; of course they would be in a basket!). No soft drinks or other food are served. At the end of the ceremony, on the way to the Hall, I introduced R and I to the Mayor, and I told him how touched we were by the ceremony and his expression of gratitude to America. He was extremely gracious, and made several introductions for us at the Hall. Such is life in France. So next, I will show you our day today..... 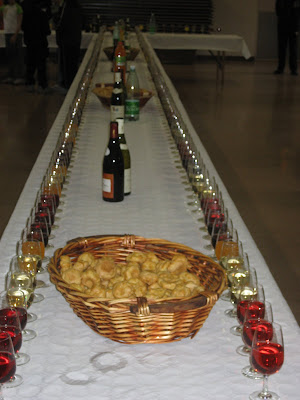