My little 10 month old Norfolk Terrier Honey looks cute enough; here she is sitting rather immodestly, but happy to be hugged: 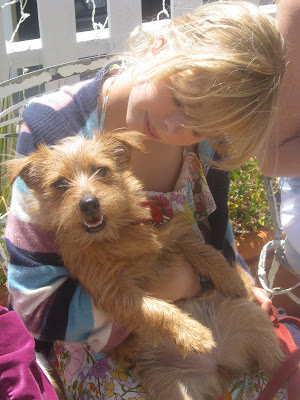 Honey is the best, most perfect little dog; we call her Lady Honey because she is so delicate about her food and everything else; but she is also a purposeful little dog; she has caught two mice in the last few weeks. Now she is up at all hours of the night, looking for more mice. They come down the big stone and brick fireplace in our guest house into the main house.

Someone in our circle (who shall go nameless), in an attempt at being thoughtful, brought a present for Honey last week: a live mouse, intended as food for a snake or a toy for a mousing dog. But while she kills a wild mouse in a second, Honey only wanted to play with the little mouse presented to her; it was like a little live squeaky toy. We thought this cruel for the poor little mouse, so soon the mouse went into the dogs' travel crate, to protect it. But soon after, it escaped. We thought it was in the house, until the dogs told us it was in the basket of the paper shredder. I had to look three times, but indeed, there he was! He was happy to have me pick him up and stroke his little forehead.

I put the mouse outside in the yard, hoping it would run away, until my Dad pointed out that 4 hours later, the mouse had moved no more than 6 inches, and would soon starve or be eaten by the critters.

The next day, I brought home a glass aquarium, metal treadmill and food pellets for the little guy, whom I named Stuart, as in Stuart Little. Didn't you read that book back in the day??

It's very very hard to photograph a mouse, let me tell you. But here we go; let me present Stuart Little, a little grey mouse with white saddle: 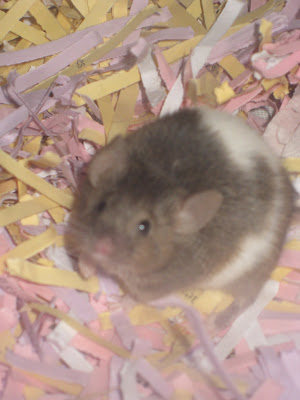 Here he is munching on a crouton: 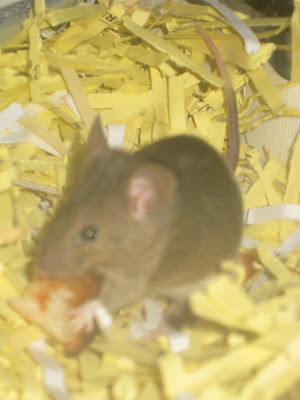 And stepping off his treadmill after a morning workout: 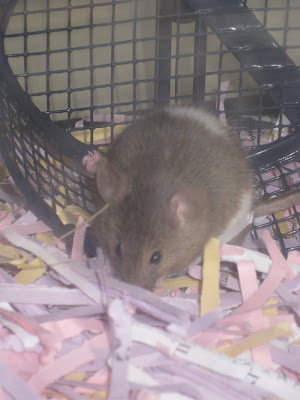 My Mom thinks that Stuart is the cutest thing ever; she cleans his little house and gives him various foods and water; that was all fine until he ran up her arm and jumped to the floor and the dogs followed suit....the next morning, the dogs located Stuart again, this time, down the floor register and in the heating duct. Mom put my prototype rolling cart liner (why THAT?) down the vent, saying it was nice and long and had string ties; in a few minutes Stuart came up the vent and went quickly under the fridge; a while later Mom rescued Stuart from under Biscuit's paw in the dining room (gently holding him down) and Stuart has been in his house ever since.

My Mom is in love with this little mouse, and she coos over him and loves to feed him treats by hand and pet him; she cleans his house daily and then watches him groom himself from head to tail; she says he is "the cutest pet ever." Meanwhile the dogs now love to watch Stuart through the glass, no touching though.... 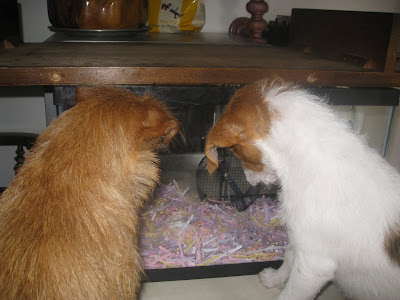 This is a lead in to our June Contest. I am so excited; YOU will be so excited!! Just wait a few days and see....just remember, All Creatures Great and Small; and Love Your Pet.
Posted by French Basketeer.com