I've got a spring in my step this afternoon because I just got the news that California's legislation AB 1998 has passed out of committee and will be voted on by the Assembly next Friday.

This Bill prohibits the distribution of plastic bags at large retail locations and charges a fee of "no less than 25 cents" for each paper bag. Less some fees, those revenues will go into a Paper Bag Pollution Clean Up Fund.

The original Bill proposed phasing out grocery store recycling programs in July 2011, and having the Bill go into full effect January 2012. I don't have the details yet, which stores it applies to, what modifications if any were made today to the Bill to pass it, but I do know this is GREAT NEWS for the reusable bag lovers like me; soon hopefully we can be like Sylvia and Annabelle (or is that Cromwell?) and carry a reusable bag, not plastic! Btw nice bike, Sylvia! 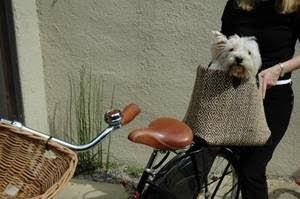 It's nice to see this happening in California. California is a leader in recycling efforts; though bottle recycling started in Oregon, California is a major recycler, with 17.2 billion pieces recycled in 2009, for an 82% recycle rate. That is up from 74% the year before. These stats are from Californians Against Waste, HERE. I will post on the bottle bill over the weekend.