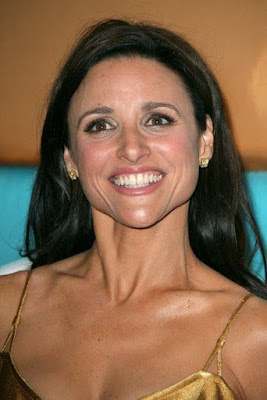 I got to Palisades today a little late, but still earlier than Ronnie and his SconeAge granola, and earlier than the Bakery Guy from Point Hueneme. As I finished unloading, the LAPD was there to try to give me a ticket since we have to double park to unload; first time ever this has happened. I yelled out the window to Ronnie, to move his truck behind mine, and he came running and he had a word or two with Mr. Officer but didn't get a ticket. What a way to start the day!
Anyway, Julia Louis-Dreyfus was there today, with her rolling cart, so she doesn't need a basket. She comes from Malibu, and is there often, and is undisturbed by the patrons; you don't want to disturb Elaine. She's usually pretty focused on what she's after, but she actually said hi to me this morning then stopped at Ronnie's next to me. Ronnie and I wondered later if she was going to the Emmy's. She had her hair done dark today and later I saw a mention of her at the Emmy's; here is a clip: http://www.youtube.com/watch?v=Z63Mo8N-LcY

So, Bravo, Julia/Elaine/Christine; she got her market shopping done AND managed to look fab at the Emmy's! Ronnie thought it took all day to look fab; Julia is not sitting home with cucumber slices and botox; she's out being normal and we love to see that....
Posted by French Basketeer.com