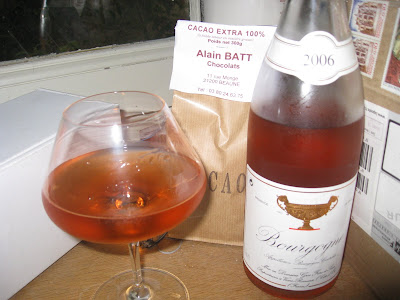 I read an article today that Julie and Julia is coming out in Paris and that the French aren't quite sure what to make of her, or the film. Well, certainly Julie's meltdowns will be completely unamusing to the French. That aside, the French have a wonderful pantheon of Chefs who have impacted (French) cooking. I guess we have a few good cooks for the everyday, like Giada or Emeril. The French have more Super-Chefs than we do though: JR or Alain come to mind.

One afternoon on the trip, we went on a drive on the north side of Beaune, to Clos de Vougeot and Nuits St. Georges etc. When we got back later in the afternoon, the boys wanted to rest after their wine tasting, R was working, and I got busy cooking. I made a lovely quiche lorraine, Julia's recipe; it made a fabulous snack! I included a shot here of the bacon bits (lardons) which I used; even the thick bacon from Stater Brothers here does not have the same taste or cut up the same....R had chilled a nice bottle of Domaine Gros rose, which was perfect as it was a hot day and hotter yet in the kitchen.

Finally I got busy on the main event, which was JR's boeuf bourguignon made in the new cocotte I got at Dehillerin. Julia's boeuf recipe is obviously made for the American crowd, calling for "stew meat" and "a bottle of red wine". She has a very straightforward preparation, which is over-simplified if you look at JR's. His is slightly different than hers, but is much more specific and more refined; the red wine is reduced by half, and rather than calling for just "stew meat" he specifies the exact cut, which I found at Casino since the boucherie was closed that day. More on French beef cuts later. We had the boeuf for a snack in the evening, I think it was around 9m; sorry the pic doesn't look that great; ithe meat was super tender and it was delicious! 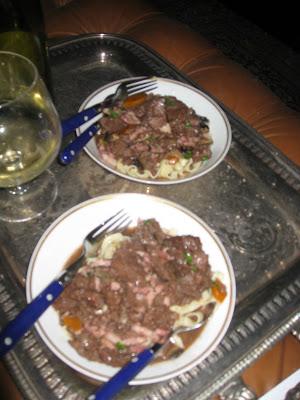 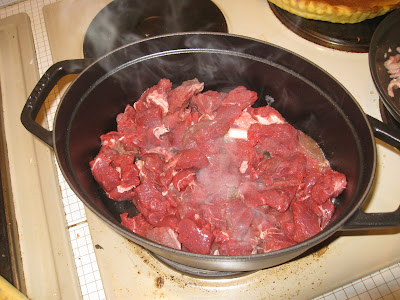 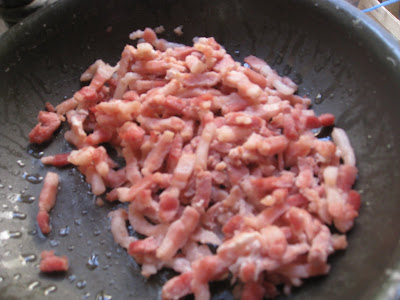 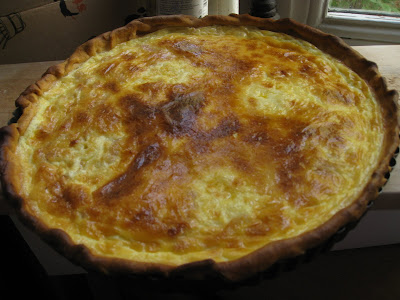