I need to tell you more about my trip to France; I still have what, about 1,175 photos still to show?

We left Beaune in the late afternoon and drove the last 2 hours in the dark, along the winding, forested autoroute. We arrived in Nice at 11pm, and I was astonished to see it more crowded than any place I have seen in a long, long time--it was packed, especially near the promenade des Anglais. As we got off the autoroute there was a moped driver down in the road, and the Samu working on him with a curtain around them and the entire neighborhood watching. Welcome to Nice. Dennis kept calling it Nee-Say and I kept saying NEECE. It was a combination of ethnic groups and degrees of affluence, basically a typical urban mix, but with an incredible sense of activity, even at 11pm. Get me out of here, I remember thinking! With the heat and the summer days, people are inside during the hot day and out walking, eating and drinking very, very late.


But you go around the point to the east and suddenly you find yourself in the small town of Villefranche, with its soaring cliffs built up with villas and usual houses, and a charming little fishing village painted Italian-influenced shades of ochre. On the other side of Villefranche is Cap Ferrat, a finger of land which is home to some of the most beautiful villas you'll ever see. Villefranche is a naturally deep harbor, and this is where the cruise ships drop anchor (Nice and Cannes are too shallow and unprotected), and the little navettes ferry passengers from the ship to the shore, where they can spend the day at the beach, dine at some wonderful seafood restaurants, or take a shuttle to Nice. 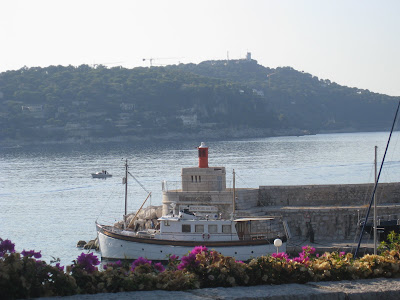 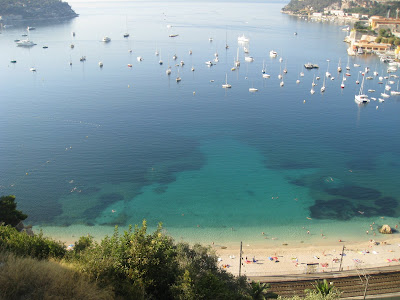 Here is a shot of the entrance to the old port, with Cap Ferrat in the background, then a 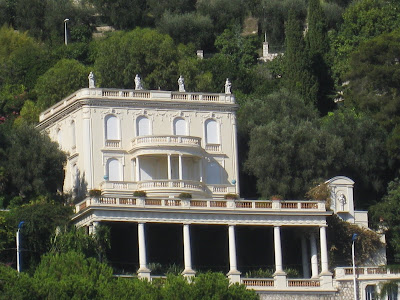 view from above, one of the villas near the beach and the cruise ship arriving: 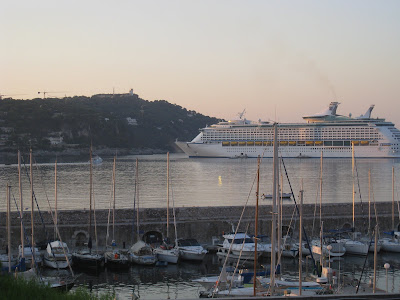 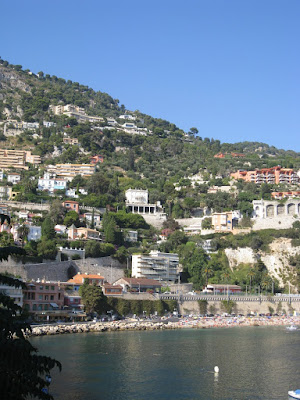 Despite the fact that people like Tina Turner live in Villefranche, and the Rolling Stones made one album in a rented villa here, it remains unpretentious, with a lovely "old port" and a crescent shaped beach along the water's edge. It was very hot, even here along the water, like 90 degrees at night, and I sat at the Moroccan-style cafe across the street from our little hotel the last night until 1am (the boys had already gone to bed) making notes of my various basket purchases and business ideas over a carafe of water and glass of rose. It was that languid kind of heat; you can't sleep and you don't want to move a lot, so you plop down in a cafe until late late. The locals were engaging but not intrusive; there was a relaxed, safe vibe in town. It is still a working fishing port, and I got up early the second morning of our stay to see what the fishermen had caught. 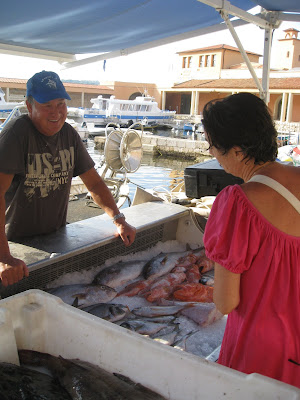 One of the fishermen was originally from Croatia, and easily bounced between Italian and French for his regular clients; here he is, at left. He used to work in telecom but this is his bliss. Anyway we got talking (for over an hour) across the board on topics, and he gave me the full tour of all the fish he had caught between 4am and 8am; here are the photos and a few highlights....

The most impressive was this dark grey angler fish; it has its own little fishing lure built right in, and it dangles this little line right in front of its mouth and then swallows the prey fish whole! There are several rows of teeth on the way down...when we see it in the market it usually has the whole head cut off, see photo; but it is a very impressive fish! 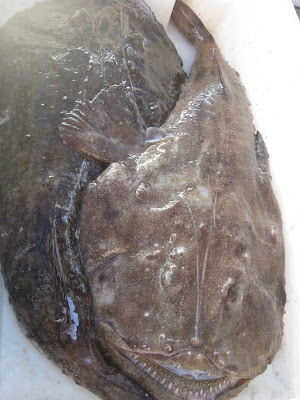 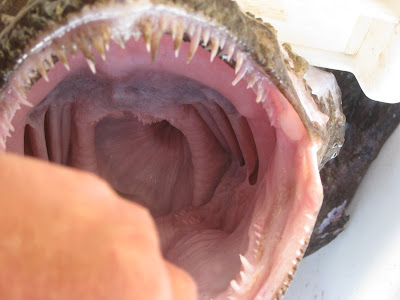 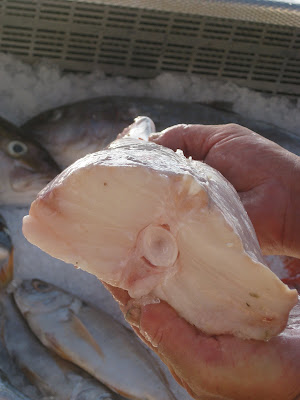 The next one here is what I call poisson menchant, because this is one mean little fish! It has a vice-like jaw and if it were just a little bigger than this one, it can grab a fisherman's wrist and might cause him to lose his hand. Or so the fisherman says! 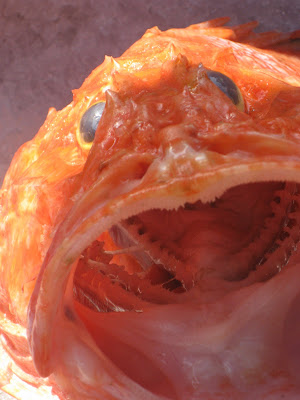 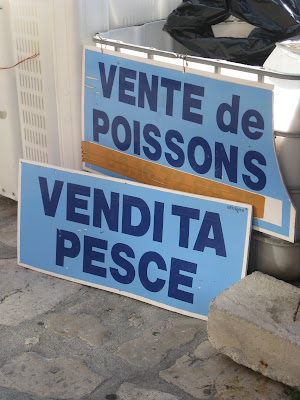 The last one here is a similar red fish, but without the vice-jaw....you would get this grilled whole on your plate... 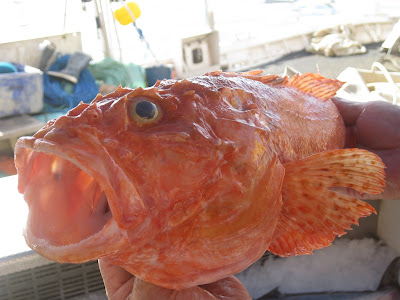 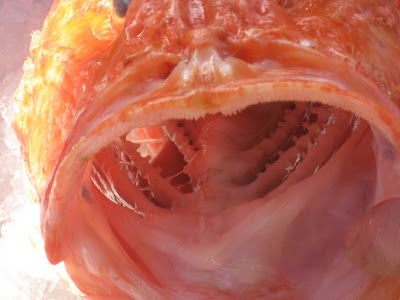 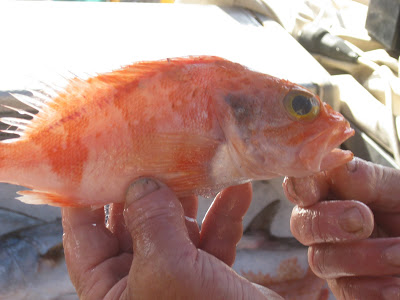