Where to Stay in Avignon

I met Judy and Bill recently, and I had a great time chatting with them about healthcare, France, and Avignon in particular. Judy and Bill like to stay at the Hotel d'Europe, which is among Europe's best hotels. I haven't spent the night there, but I did treat Mom to lunch at the fabulous restaurant once.

Avignon is a great place to stay because it is centrally located to see a lot of the south of France. The city itself has the Papal Palace (will post on that later), which was home of the "French Popes" in the 14th century; it's also a university town, which gives it a certain edge; I don't like to be in town very late. But within easy driving distance you can visit a number of other great sites: the Pont du Gard, the Roman amphitheatre/coliseum at Arles (not to mention the rest of Arles including Van Gogh's Cafe de Nuit), the Roman theatre at Orange, Les Baux, Fontaine de Vaucluse, Ile sur la Sorgue, the vineyards at Chateauneuf du Pape, Cassis, Marseille, the Luberon valley, Aix. I could go on and on! The TGV station in Avignon is one of the best and very modern; there are lots of car hires (Hertz etc) there at the station and Paris is only 2.5 hours away. 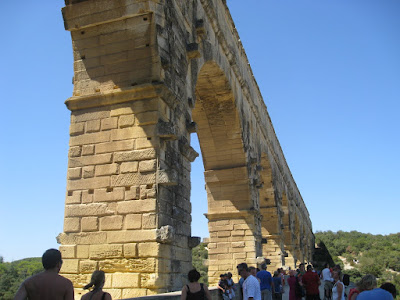 Anyway, Judy and Bill asked me where I stay in Avignon; it is actually not in Avignon; it is called La Ferme Jamet, a bed & breakfast or chambre d'hotes on the Ile de la Barthalase, which is Europe's largest river island, largely agricultural. The Rhone river splits in Avignon, with Avignon and the famed Pont d'Avignon on one side, the Ile in the middle of the River.

The Ferme is run by Francoise and her husband Paco, and you will be hard-pressed to find a warmer welcome and a better oasis of calm in the region, unless of course the Mistal gets going, which it did just one night during this trip! It's easier to get in and out of town on the Island than it is from central Avignon, which is about 5 minutes away, and the parking is also free....

Here is the lovely ivy-covered facade: 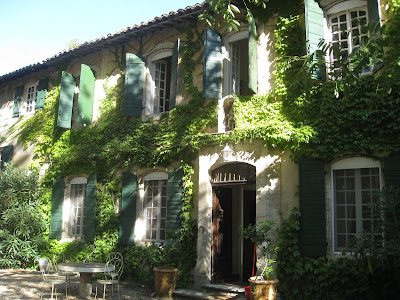 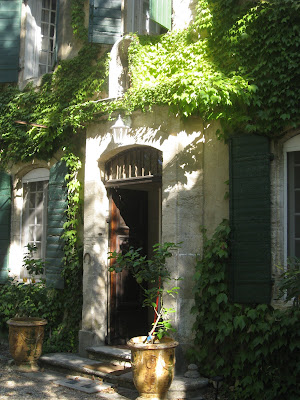 The main building is a 16th/17th century hunting lodge, now with a series of rooms named after French painters. At this point I have stayed in just about all of the rooms, I think, and they are all very charming and comfortable. One time R and I stayed in one of the little cottages on the property, which was great because it has a little kitchenette, so we were able to do some light cooking. On the other hand, he was also very jetlagged that trip, and woke up several times in the middle of the night deliriously wanting to drive to the Fondation Maeght museum. Go back to bed, I kept saying (neither of us had a watch), when the sun is up we will leave! Other than that night, I have always slept super soundly at La Ferme... 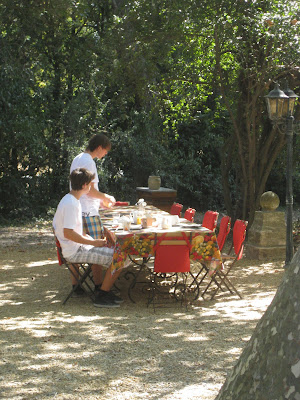 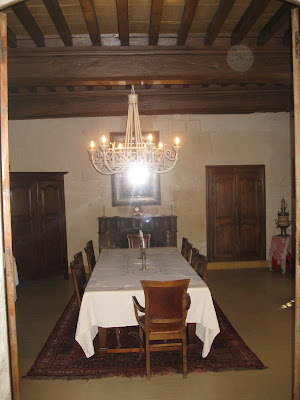 Here are a few photos of the house from this trip. There are lots of places to sit and read or rest, inside and out, which is why a lot of French come here; you can take little day trips or bike rides and really "get away." 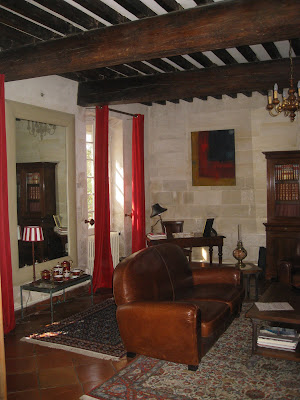 The other thing I love about La Ferme is that everyone eats breakfast together. This time of year, we were all outside under the giant plane trees. Tomorrow I'll post re our conversations. The boys were generally late to get up, so here they are having their breakfast by themselves....

You can see more at http://www.domainederhodes.com/ give my best to Francoise and Paco if you go!! I will see them again next spring.
Posted by French Basketeer.com