Today I got a much needed break from my parents’ care.  Dad decided he wanted to sleep downstairs a week ago, so I moved my bed into the middle of the living room and every other night he sleeps there and I sleep on the couch next to him, listening to him breathe all night and hearing the ice cubes drop in the bar.  It’s going to be a long week, but we have just 6 more days to go.  I got them out to their office this morning  (did I mention they still both work five days a week!) and then I came home to meet the driver for the metalworkers, who was to take more pieces off for sandblasting and “metalizing.”  To my delight it was the owner of the company who arrived with the truck, and off he went with the pair of white gates, the patio bar (you have seen it in other posts and it will be used at the party) and two iron tables from the pool yard, after sharing a few stories of his own parents; a good man.  We are really looking forward to seeing the repaired pieces back in place.

Meanwhile, I got busy running errands.  To the warehouse for baskets, to the seamstress to have some runners sewn for the party, and to the framer to fix up this neat little portrait that I found down in the Man Cave.  “Faithful” signed “Jack Gore,” original photo with masking tape…in need of framing.  It was in with things from the “old house” so pre-dating 1970.  It surely came from my Uncle Larry, who is an equine veterinarian.  What a great name for an animal, right?  Faithful.  Do you love this portrait?~ 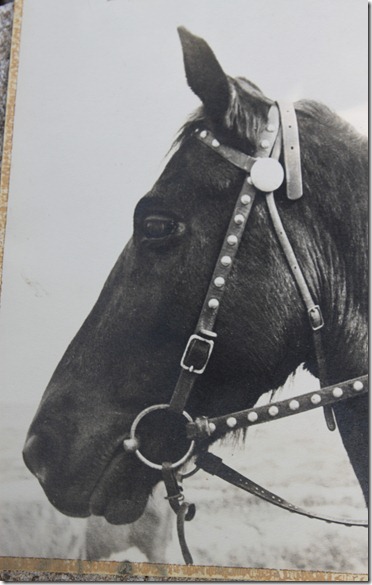 To my delight, as I was preparing the white gates, the postman arrived with a large package from Guy & Jacqueline in Brittany.  YES! So Excited!  I chose this bassine a confiture, which will be used for wine or iced beverages at the party, and later for confiture, of course! I set a wine bottle in it to give you the size~ 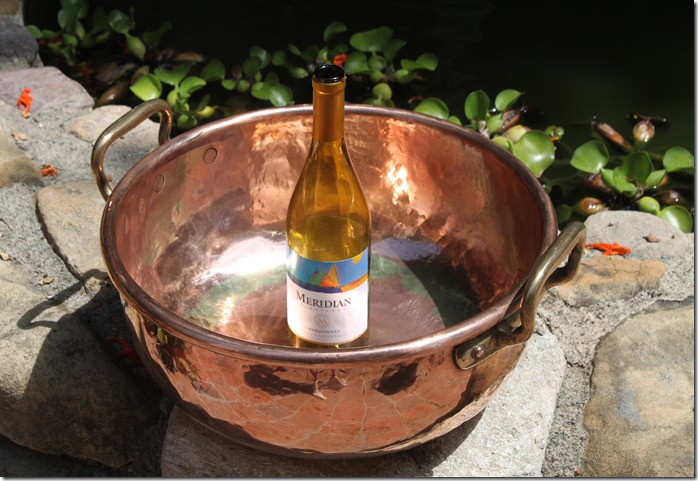 It is very old, not marked, and I have never seen one like it anywhere in France.  I also own one of the modern ones, they have a flat bottom but are not artisan like this.  It is slightly conical, to be used over an open fire, and finished with laiton joinery~

Handles also of laiton, hand-chased, and rivets of copper~

Fully finished with the wolf’s teeth joinery I covet~

Guy also sent a faitout, top left, which was intended for my client Bob in San Diego.  But now that I see it, it is larger than the one Bob wanted, but also a perfect wolf’s teeth piece, and with the other two faitouts I have, it makes a perfect trio as it is in-between the XL and the small ones I have.  Unfortunately for Bob, I think I am keeping this piece.  It is worn down to the copper inside and on the lid.  This is a really old and heavily, heavily used piece. The small casserole is also very old; it is wolf’s teeth and with iron handle; the smallest wolf’s teeth Guy or I have ever seen.  I Love it all~

I also got two spoons, one in laiton “d’une seule piece” and the other with an iron handle and copper rivets.

Both perfectly finished, these are going into my kitchen.

This afternoon I looked at the linens.  I began rolling the torchons (dishtowels) that will be used for napkins for the party.  These are really XXL and will be like lap napkins.  There is nothing to clean your hands off like French linen, I promise you…..

What is better than linen and lavender?

Yesterday I bought 50 yards of high-end velvet ribbon from a photographer in San Diego.  Colleen is totally delightful and coming to the party.  I debated a celadon green velvet with Raquel, but in the end I went neutral.  I might add rosemary from the garden….

But I will probably lean towards lavender, also from the garden.  Not sure if velvet seems too holiday, but it works for me for summer too and I don’t feel like driving to LA to get anything else.  And I am tired of raffia and twine.  Time for something new….

Also a little shout out to JW….I put a little poopoo and dog hair (post grooming Honey & Biscuit) down that hole and the gopher relocated to another wall.  Which is now also plugged.  LOVED the tip….many thanks…..