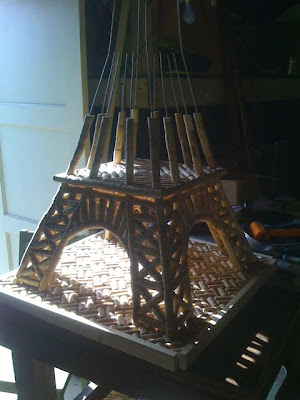 Two weeks ago, I was in Palisades market and I had my niece Nicole along for the day. I dropped her off with our gear, then went to park the van. When I returned, she was deep in conversation with our neighbor (to my irk; I thought she would be setting up!) , who was selling Italian sauces and fresh pasta. "Steven," not Steve, greeted me in a straw fedora and with a perfect British accent (though he is American, he has flair and is a great salesman!), and I then asked Nicole, "do you know each other from school?" No, they had just met, but had quickly found a common love in San Francisco, where Nicole is at USF.

We chatted throughout the day, and got back on the San Francisco topic. Steven is going there to try to close a deal he's working on. Most of the people selling at the market have several jobs, or at least two; Steven sculpts in wine corks, and he is trying to close a deal to create a scale replica of the Golden Gate Bridge out of used wine corks. My wheels work pretty fast, so I suggested that while he's there, he can do some reconnaissance for me at the markets and a few stores. We agreed on a few key markets.

As the conversation progressed, between sales, I asked about his cork sculptures. His first and favorite was an Eiffel Tower. The wheels got working again, since I was going to the French Festival in 2 weeks. "Can you make an Eiffel Tower by the 11th, I asked, or rather, a pair?" His first was more than 8 ft tall, but I was thinking of something more saleable. Steven went on to explain some of the geometry of the Eiffel Tower, he works off the math of the tower; it really works well in large scale when you're working with cork, but then if you look at his pieces on his website http://www.oneofacork.com/ you will quickly see that he just loves high impact important pieces!

In the end, I commissioned a 5 and 1/2 ft tall Eiffel Tower, plus a mini if he could complete it. Here are a few pics of the work in progress. Fascinating (at least to me)!!! I love that it is handmade, a piece of art; love the herringbone base, which goes with my St. Tropez basket....

So, tomorrow we are off to the French Festival, and Steven will meet us there; I told him to bring as many of his other large pieces as he can; it will be a draw for the booth, it's totally French on several levels, and it's just plain fun! If he can sell a few pieces, all the better.... Le Courk Eiffel is Steven's name for the tower; in French a cork is a "bouchon". If there is a lot of traffic, you say it is "bouche" (accent aigu), or corked up. But le Tour en bouchons doesn't quite grab it with les Americains...

See you all at the Santa Barbara French Festival! 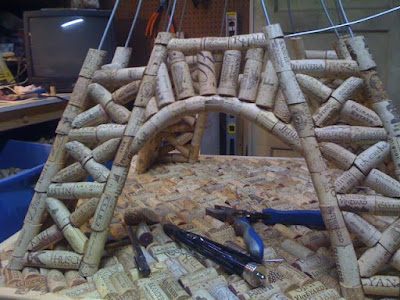