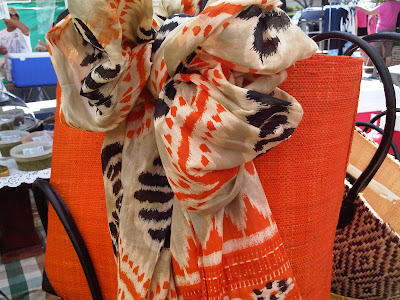 Sunday was jam-packed with interesting images and ideas. It started when I headed north out of town and saw more than a few hundred Pacific Coast Triathlon participants lined up on the sand from El Morro to Crystal Cove; the surf was past its peak but still easily 10ft. Everyone was lined up, in awe of the surf, which was breaking in a long, solid line. Holy crap. I would not want to go in or out of that surf!!! btw they did a half mile swim, 13 mile bike and 3 mile run. I think my sister Janis and and I will try it next year!!
Loretta Lynn was live and Amazing on the radio on E-town during my drive, singing Coal Miner's Daughter; she was totally fab.
The pulse was as strong in Palisades market; it was non-stop from 8am - 1pm. Jonathan came by and gave me a great business idea; the Food Critic came to report on her recent trip to Dijon and to tell me about her visit to the Maille store there, which I recommended. She and I traded stories of Paris and while we had a few common ideas on where to take the Boys in August, she gave me a few new ideas. Love that.....
Pali is a wonderful market; people are well-traveled, well-heeled and well-educated but not snooty. They are a little guarded though; they will hint at what they do (private chef, producer, food critic, designer etc) but not give specifics, and I don't press them for more; I love that they are under-the-radar; speaking of over the radar, Jennifer Garner came through the market Sunday around 10am, followed by a dozen papparazzi. I was in discussion with the Food Critic so I missed it; Ronnie next door was mad at me for "not paying attention" but I was having a great time talking about Paris. Jen, please come back, and I will give you a nice deal on a basket :)
Posted by French Basketeer.com