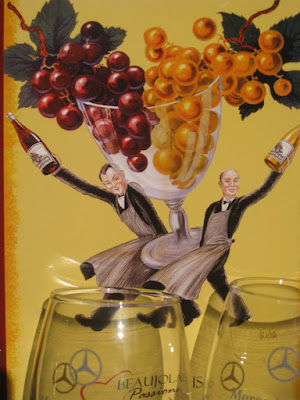 In New York or major cities in France or certain cosmopolitan spots around the globe, you will see signs in early November heralding the arrival of the Beaujolais nouveau, the new wine from the most southern region of Burgundy, wine intended to be consumed within the first year. It is low in tanins and somewhat fruity. There is usually a pretty ad campaign by one of the leading producers, Georges deBoeuf. It has its fans, like my friend Kimberly, but I am not one of them. Give me an aged Burgundy any day, even a few years old. Someone commented that Beaujolais Nouveau is like eating cookie dough vs eating a cookie; that is perhaps not a bad analogy.

Anyway, the Beaujolais Nouveau is released for sale on the third Thursday of November each year, and last evening there was a party in mid-Wilshire LA for the new wine. It was fabulous to see 98% French speaking people setting up for food and other sales. I was there with baskets and sold very little, but I traded for some awesome Tahitian and Madagascar vanilla paste and sweet little Tahitian pearl bracelet, and met some very lovely French-speaking people. In other words, the company was great, the wine was ok, and I also got to bring home a bunch of little glasses for Tina that are marked by one of the sponsors, Mercedes of Beverly Hills. Cute! Look at the program cover here; it is fabulous; merci Pascale.....!
Posted by French Basketeer.com