You might think this is a departure from baskets, but it's about France so that's fair game for my blog. I've read a few design blog posts lately about the love and use of exposed beams. Sometimes the installation of exposed beams ("poutres apparentes") is decorative and has no relation to the construction of the home; sometimes the houses have always had the beams ("poutres") and they are finally liberated into view. There is a house in Emerald Bay that I pass reguarly that is country style with relatively low ceilings but huge faux beams. It looks beautiful, though the ceilings are not very high, but it's also a little out of context, to me.
Exposed beams are found all over Europe; it's not necessarily a "French thing", but it's true many fine examples are found in France. Exposed beams were also used in England, after William "Guillaume" the Conqueror came from France, won the Battle of Hastings and was later crowned King of England. That was in the 11th C, and William brought much of the French language in to English, and also certain French influences, including building styles. I wanted to post on half-timbered buildings here but I'll do that separately.
Why did these beams come into being? Originally, it was not for aesthetic reasons, it was out of necessity, innovation and availability of resources. Wood has been a readily available resource for building, before the use of any metal or even nails, or concrete. It breathes, it moves, it is a matiere noble. Even if the wood splits along the length of the beam, it is not weakened, and can carry huge weight. The use of wood also enabled the construction of multi-story buildings. Our house in Beaune has exposed beams, but they are not decorative, they hold the house up: 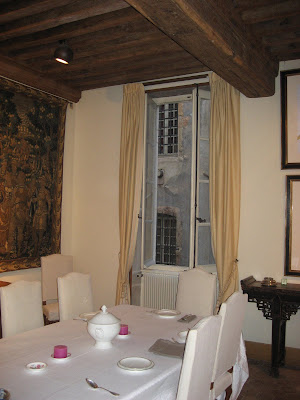 The house was built in the 17th century; it is made of stone walls (most of the individual stones have a monogram of the mason) and beamed ceilings. I have to look at my notebooks for the ceiling height; 13 feet? In the late '70's when the previous owner bought the house, the two middle floors were comprised of a warren of little rooms a la the 17th century: each little room had it's own fireplace and had room for little more than a small bed and a table; those interior walls were taken down and the entire space freed up so that now you can see the full length of the beams. Every room has exposed beams, and the 4th floor of the house also has heavy beams, arched to hold the roof; the beams there are constructed without any nails; the wood is specially cut and fitted together.
Most of the beams used in France are oak (chene) or sometimes chestnut (chataignier). Most people don't appreciate that the beams in France are aged for a long time before they are installed. Here are the raw beams taking their time to age: 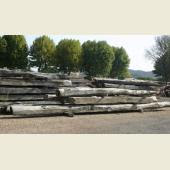 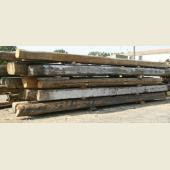 In many commercial installations, such as for wine, the logs can be aged for 50 years or more; splits in a beam don't harm the ability to bear weight, unless the beam twists as it dries; in which case it can not be used.
The outer parts of the log are planed off, so that only the oldest, most dense part of the wood is used. Here is my nephew in the wine making outbuilding of the Clos de Vougeout, not far from Beaune; these buildings date to around 1600 though the Cistercians had been making wine on the initial parcels since the 12th C. The monks tended the 125 acre property and made wine; they had 4 of these enormous presses, each capable of processing tons of grapes. The chateau was taken from the Church during the French Revolution and sold off to private buyers. 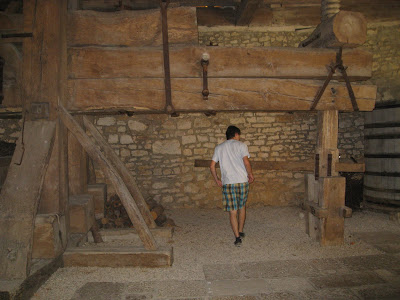 this is the ceiling in the same building; you can see one of the four wine presses in the corner; this is a massive massive building and a real marvel to me: 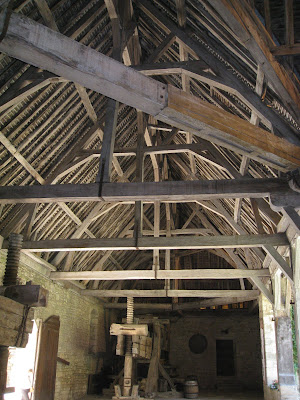 If you look closely, the roof tiles are hung directly on the battens (I think that's what you call them); there is a "bump" on each tile to keep it on the batten; besides the tiles, it's all wood: 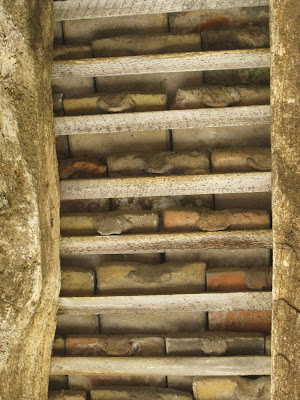 Meanwhile back in Beaune, we have the Wine Museum up the street from our house; here is the ceiling there, and another wine press. Beams of this size are aged for a long long time, up to 100 years, especially the large piece which is sculpted into a screw shape: 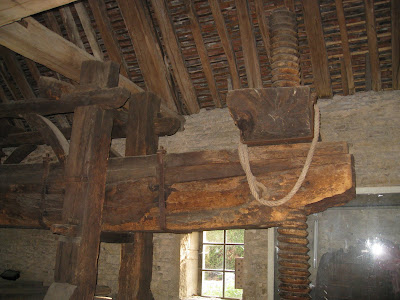 The outside of this same building also uses wood: it is what we call a half timbered building, and the French call "maison a colombages" or "maison a pans de bois." There is a generous overhang on most of these buildings, which keeps the facade dry: 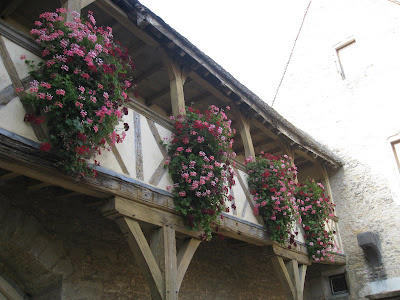 Some of the best examples of the style are found in Normandy, and my favorite place is Pont l'Eveque. Here are a few examples from last summer, on a rare sunny day in Normandy: 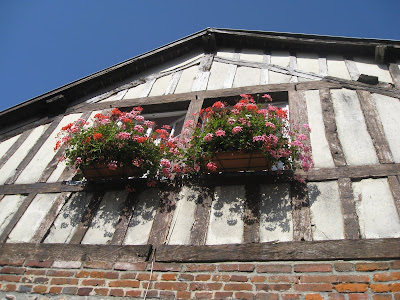 They have brick or stone bases here for stability; and generally an overhang. I can't look at another pretty French street lantern and not think of Joni! 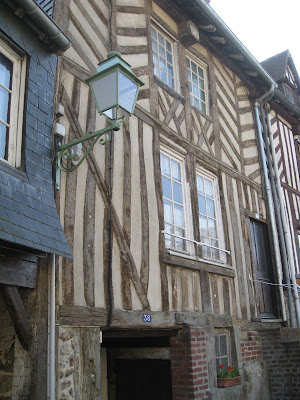 I took this shot out the car window; it's a little crooked, but I loved the geometry of the house and the door, not to mention the color of its blue: 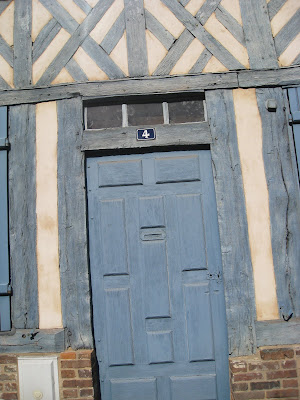