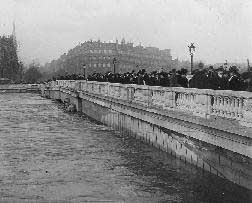 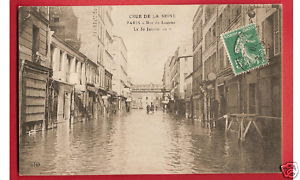 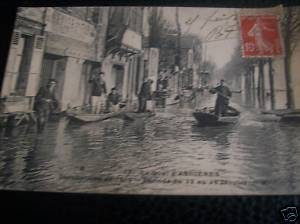 I arrived in Paris (happily, to live!) in the middle of January, more than a few years ago, and what I remember about the first month is not having difficulty with French language, or the beauty of the stark winter landscape with the clipped plane trees....No, I remember that it rained for days and days....and days and days. I kept track of the number somewhere. I think it was 21.

So, it was interesting to see a piece in LeMonde online today about the great Flood of 1910. There is an exhibition now at the Galleries des Bibliotheques, 22 rue Mahler Paris 4eme, until March 22. The photos in LeMonde are fascinating, whether you know the city or not!
Because of the situation of the city of Paris and the tributaries of the Seine, as well as a phenomenal amount of rain and snow over the previous three months, the city was flooded by 5-8 metres of water between the 18th and 20th of January 1910. There was no electricity, no drinking water, no heating and no transport. It took the city a month to return to normal, and three months to restore Metro service.
Here is the link to LeMonde, with lots of great photos and commentary, including the first one of the Gare d'Orsay (current Musee d'Orsay):
http://www.lemonde.fr/culture/portfolio/2010/01/11/1910-paris-sous-les-eaux_1289387_3246.html
I've added a few shots of some postcards of the flood; the first photo is of the Pont l'Alma (where the replica Statue of Liberty flame can be seen, above the tunnel where Diana was killed...). The arcades of the bridge are completely submerged, so this gives you an idea of how high the river was. Living in Paris, one is always watching the river and how high it is. There are various markers on the retaining walls to measure the height; and if there is a lot of rain you can count out walking down along the river (the "beaches of Paris" in the summertime). I've seen the river pretty high, but never ever like this!
Posted by French Basketeer.com