I woke up yesterday morning feeling exhausted. I could hardly get up and out of bed: my feet were still tired, I was still tired, of all the work and activity that had taken place in the previous week, not to mention the cosmopolitans that had been consumed the night before. They were made with less sugar and lots of fresh blood orange and Meyer's lemon juice, but they still kicked my butt! I called in to the Palisades market manager and told her I would not be there today; "calling in exhausted" I said.

I spent the day cleaning up, but also had time to spend with little Honey; escorting her around the yard while she smelled everything. She's a total pet in the house; I am starting to wonder if she's a dog...she's more like our little rag doll Bear. But out in the yard, she's a terrier, nose to the ground.

This week I have confirmed a little sister for Honey; her name is Fox Island Biscuit, or just "Biscuit." Here she is, at 6 weeks: 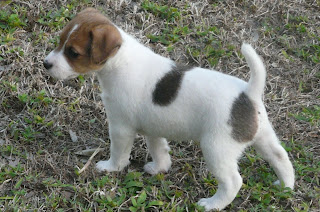 She is a Russell Terrier, which is basically a line of Jack Russells that were developed in Australia over the last 40 or so years. They are part of the AKC under the Miscellaneous group. She will be a little girl, about 11 or 12" tall at the shoulder; with the same rough coat as Honey. Her coloring will lighten from the puppy coat she has here to white with tan and brown, with her white blaze down the forehead.

I thank Dan Grimmel of Fox Island Kennels for allowing me to have this little girl; she is "the sweet one" of the litter, very calm, loving to be held. Nothing aggressive or barky or psycho about this dog! The Australians did a fabulous job breeding out the worst of the JRT traits, which I love because I can't have a hyper-Jack or an aggressive dog.

This week I happened to be at my sister's house and I noticed an etching that I bought about three years ago, that my sister insisted she had to buy from me; does this puppy look familiar?~ 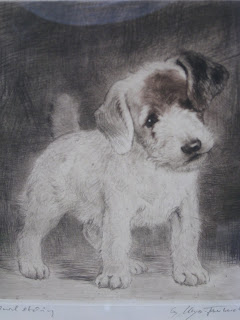 A shorter legged, rough coat white dog with tan head must have been in my mind's eye, and my sister's too, as she asked this weekend if I wouldn't please please let her have Biscuit. Nope, it's going to be Honey 'n' Biscuit at this house; I will find a new puppy for my sister soon. Biscuit will be here early April.