A farmers market at its best is a combination of fine produce, imagery, color, colorful characters and a community event. Pacific Palisades market has all of that, and it continues to amaze me. There is a wonderful coordination among vendors- discounts, awareness, referrals; we all support each other. Many people have told me that this is really the only place in Palisades that people get together on weekends, and I believe it; they have brunch, shop, and buy organic. As in France, the weekend market is "an event" and the place that one runs into others and touches base. It's a social gathering in addition to regular shopping.

Palisades is a little different because of the clebrity thing; today Ronnie and I saw Julia Louis-Dreyfus leave on a bicycle, the front wicker basket loaded down with produce and various reusable bags hanging off the side. Ronnie said it first: he would have LOVED to have taken a photo of her, as I would have, but we don't-- she is a regular; she is a celeb who practices what she preaches and we are so in respect of her for that...so, no shots of her here on the blog....unwritten rule....cheers Julia....

Today I bought more produce for my Mom so we can juice this week; that's her "kick" lately. Here is my basket today of beets, chard, celery....there is a new addition this week, of fresh garlic. Now perhaps I have missed this one in previous years, or dismissed it as a small leek. but here it is: the farmers market answer to a tail feather, no?..... 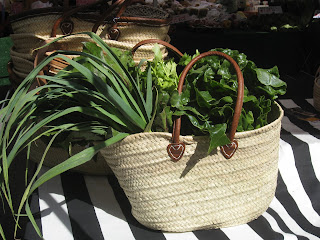 The garlic was given to me by John, whom I usually call Bob, for some reason. Today I asked him to pronounce his last name, Svedesinksi or something uncommon like that....I have dubbed him Johnny Suede since that is what his name sounds like. And I will remember a little monicker that. Sounds pretty cool, doesn't it? Johnny Suede is a real character: he is a lot of fun and really engages his clients; I said, hey, I want to give you a few produce bags etc etc. A few minutes later I dropped some off to him. Give them to your regulars and let me know the reaction. I got the carrots from his neighbor, but they are small baby carrots like my Mom loves..... 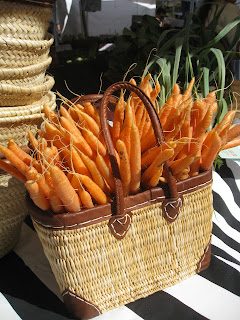 I had my colored net bags out today and sold well on those: 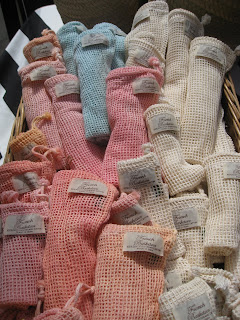 My neighbor who sells dried fruits had his two daughters with him today; they made a nice little bed out of produce crates!!! I asked him if I could take a photo of them and he said of course, take the photo, take the kids if you like :) here are the girls:

A minute later I gave both girls a pink produce bag, which ended up immediately on their heads as hats, then held their shoes, which were set aside from the crates out of view here; 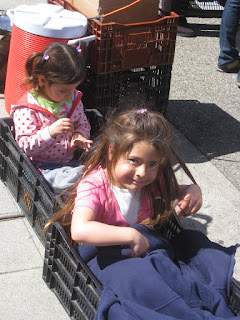 A moment later, a man appeared with a large net bag FULL of little paper bags filled with produce and mushrooms. "Someone is giving them away over there" he said with excitement; upon further discussion, it was from Johnny Suede, and yes, he is a regular shopper, and just THRILLED; he was able to get all of his purchases in one large produce bag and he said he'll bring it back next week: 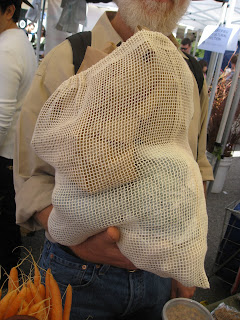 Here are some of the flowers I bought for my sister today; lovely lovely and not expensive; pretty soon I will have to post only on the flowers, because they are really spectacular lately: 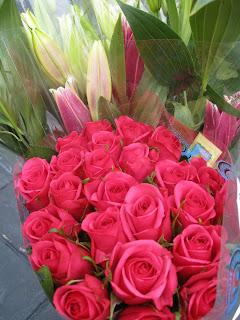 Johnny Suede gave me some "fresh garlic", as I mentioned; he offered me a green leaf to eat as he chewed on a stem...I can't I said, I have to talk to clients!! Look too at the green (organic) Swiss chard below the garlic; it was fantastic with anchovies on Monday: 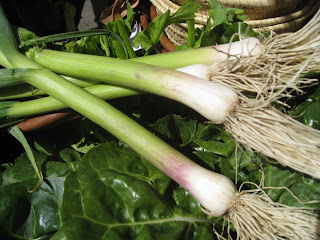 Later on Sunday, I chopped the garlic, and it went into a saute of garlic and mushrooms over a steak; was it ever GREAT; mild yet pungent!!! 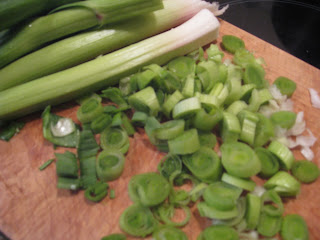 I made the dinner for my parents. It was odd; over dinner we watched what I wanted: rerun of I Love Lucy. Over dessert of vanilla ice cream and fresh strawberry sauce, we watched what they wanted: Laguna the Real OC. Talk about a generation gap!!!
Posted by French Basketeer.com