The Chic Shopper has competition. The Chic Shopper is my client and her dog Laika, who are now the featured photo on my home page. The baskets are meant to be effortless chic, to dress up and finish off your outfit with a tote that is better looking than a reusable cotton bag, but much less expensive than a designer tote. So when I saw her standing behind my booth last fall waiting for her daugther, mango Cap Ferrat tote in hand, we had a nice conversation which included me taking two photos of her. People have such a reaction to her photo; they love it, and it's what they want to look like when they go to the market.

Yesterday at Palisades, a shopper came to the market with her two daughters and a large Eze she had recently purchased from me. Wow did she look great! Who goes to the market looking like this? Even in Paris, you see it very rarely. We get a lot of well-heeled shoppers in Palisades, but this lady really stood out. Turns out, she was on her way home from church and so that was why she was wearing a full black skirt, a sleeveless black top and strappy slingback heels, accessorized with oversized black sunglasses and my Eze tote: 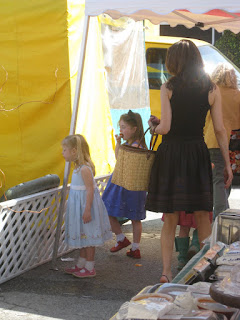 I asked her if I could take her photo, and she was demeure about saying she had to meet someone right now at the corner, darn! I took these shots as she walked off: 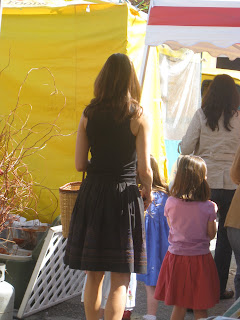 I can't use the photos on the site, but it gave me a great idea; I will ask Frederique, one of our regular French shoppers, to by my model and we'll style something similar to this. It's spring now, and the Chic Shopper is dressed for fall. Frederique will surely be game; I'll get Ronnie to help me style it and we'll have some fun coming up with a great shot. Stay tuned....