After the photo shoot was done at the house, today was a day to relax, a little at least.  I rose early and went to the market just after 9am, to join the legions who lined up to buy their very specific Christmas foods; just the right kind of volailles from just the right vendor, just the right kind of butter, just the right this and that.  I bought a poulet fermier de Bresse, which cost 22 Euros; expensive, but I still think it’s the best.  I brought stuffing mix and that’s just what R said he wanted for his Christmas dinner, chicken and stuffing.  The vendors at the market were all very friendly, as usual.  I bought a large Savoy cabbage then complimented the vendor on her display.  She was nice to wish me bonnes fetes and give me one of the little bundles, which I used for the next photo shoot, today at Jean-Luc’s shop~ 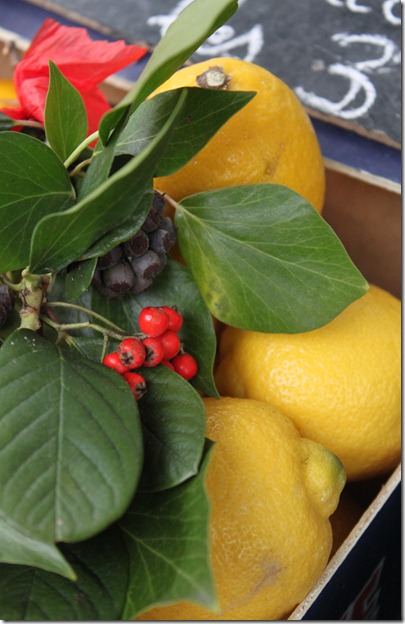 Everyone makes what they want to out of being in France.  R is more introverted, and he speaks less French, though he speaks without hesitation and gets his point across.  Ce qui compte c’est d’etre compris.  What counts is to be understood, not to speak perfectly.  I am the opposite; please just let me out of the house.  I chat with the antique dealers and the shopkeepers, and everyone in line with me at the market; what to buy and how to prepare it.  I love the French sense of humor and to joke with them.   I had filled my Saturday Basket with market lovelies, and was in the middle of shooting it on the front doorstep when someone we know walked by, whom we have not seen in years.  Oh how great it was to see him, to chat and catch up.  I hope to be here longer someday, as I would like to entertain a lot more.  How do you like the door?  People here generally don’t put up a lot of décor on the doors; in France no one makes a conspicuous display.  I wanted a little nod to Christmas anyway~ 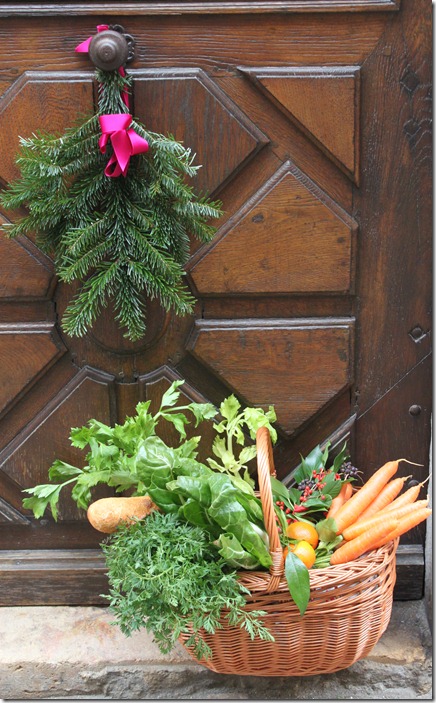 After the market, R and I went to the Orange store, to sort out a television issue.  Such conversations are not like ordering a baguette, and it’s where I come in.  But the second that was sorted out, I was off to Jean-Luc’s shop with a yet another basket full of linens and objects.  A short time later some of his friends came by.  Would I like to join them for a little glass, Jean-Luc asked?  Yes, of course.  You have to understand his sense of humor, he returned with a pour of Puligny Montrachet in a glass that was half the size of my head.  Little joke….a little glass….we all laughed…. 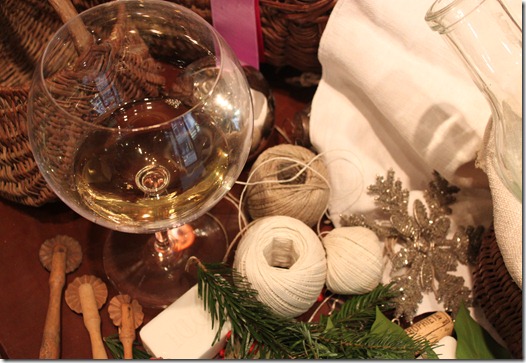 I start to get a little sad when it’s the last few days.  I have tried to get R to eat share some Coquilles Saint Jacques. He kept saying no.  Today I bought just two of them (scallops) in the shell at the market.  I opened a bottle of Saint-Aubin and made a snack of them, just for myself~ 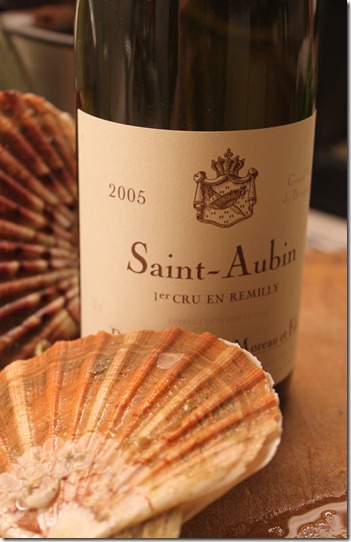 I made it with a tablespoon of the butter I bought today at the market; everything tastes so good here, phenomenally good, and it’s presented like this, for your Christmas table~ 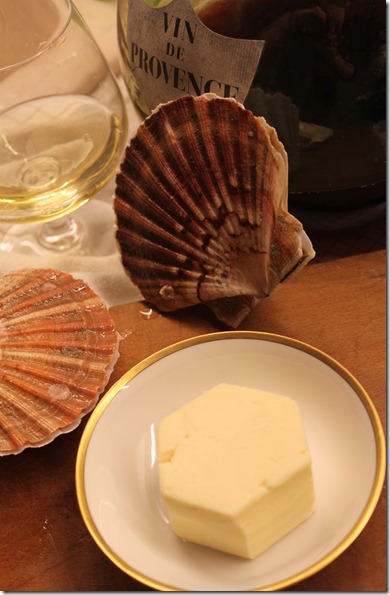 I added a little sea salt on top and at it with one of the dinner rolls I bought for the shoot; artisan bread and farm butter…..heavenly~ 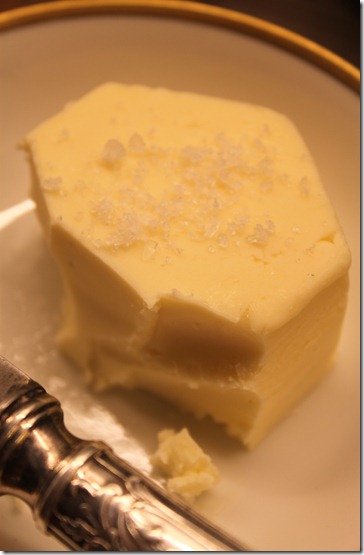 And the Coquilles Saint Jacques were the best ones I have had since…..perhaps the last time I was here~ 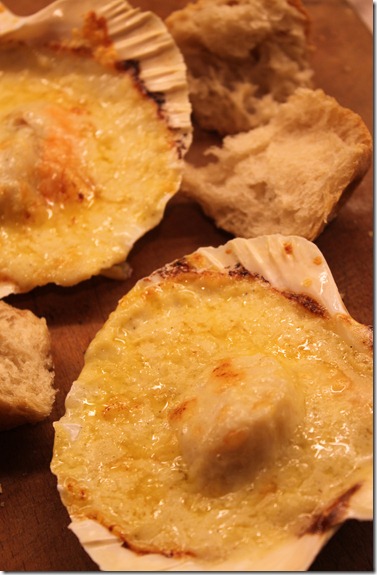 The photo session at Jean-Luc’s was very successful; he loved the photos, which are of various elements in his shop that could be inspirational for magazine readers.  I did some clean shots; not too old, not to modern. He likes to coach a little too as he knows how to display his merchandise to perfection.  When Jean-Luc sees one of the really good shots, he usually says “Tres Chic!” or Tres Ancienne Maison!”  It’s what I know people in the US will love to see and try to copy with US goods.  Of course, I’d rather go and get the real deal.  And photographing the antiques of course meant that I fell in love with a lot of it.  I bought so much I had to have Cedric help me walk it all home.  More cutting boards, two large bunches of vintage cording, porcelaine blanche, two Burgundy grape gathering baskets and a few other little gems.  They are sitting now on the dining room table for me to admire; some other pieces are on the buffet tonight~ 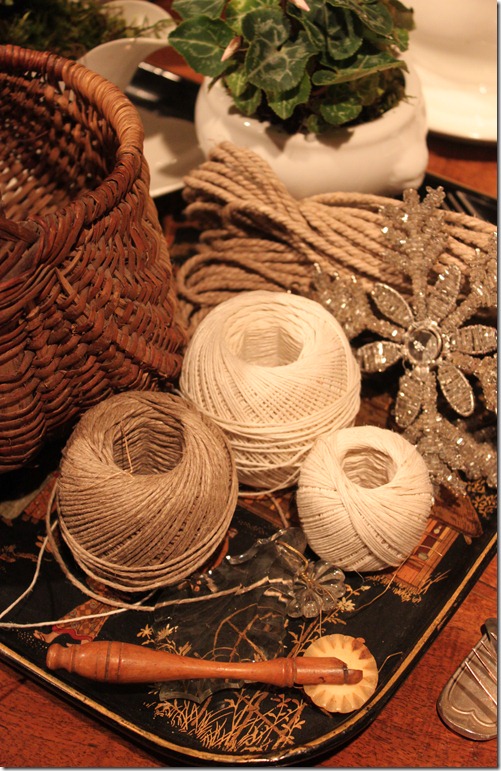 As I walked in the door, R asked where I had been for the afternoon.  Photos, for three hours?  Well sure! And a little shopping, and a little wine.  And chatting with a few people.  As if I would have been better served sitting home doing laundry or something.  No, that’s 5am work, not during the day work. 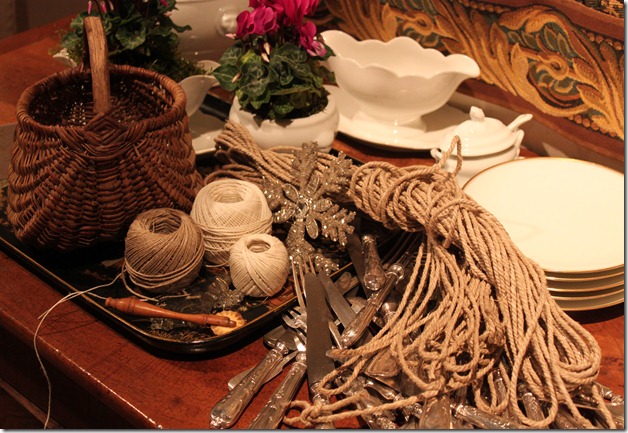 Cedric then helped me break down the rest of the materials from the house shoot so they can be collected Monday, and I threw out the rest of the largest pile of cardboard.  The chicken and stuffing are in the oven and after dinner we will get the TV sorted,  Tomorrow is another day, and I’m going to be up hours before dawn to enjoy every minute of it.