I have busy days and I have busier days, and today was pretty high on the activity meter.  We had agreed to have the metal workers come at half eight to install the vintage wine racks in the cave, and had brought all of the wine out of the cave and into the hallway the day before.  Seeing all those old boxes and crates is like seeing old friends again after five years.  We had forgotten much of what was in there. 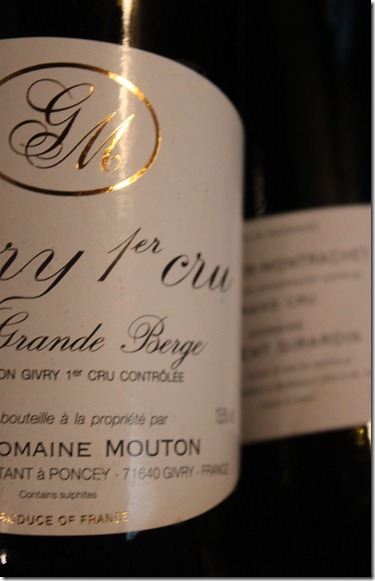 The crew worked fast though, and before long, the racks or casiers were in place~ 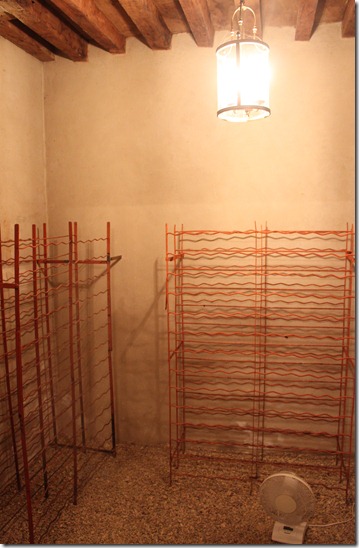 They were a really professional team of three, and I asked R to be sure to give them each a bottle of wine and we wished them Bonnes Fetes.  “I will think of you (when I drink the wine)” the foreman said as he collected all three bottles.  They also moved the crusty Louis Philippe table brought from a brocante five+ years ago back onto the terrace from the street, which was a nice gesture.  Tomorrow I will clean and wax it, and I have just the place to put it now~ 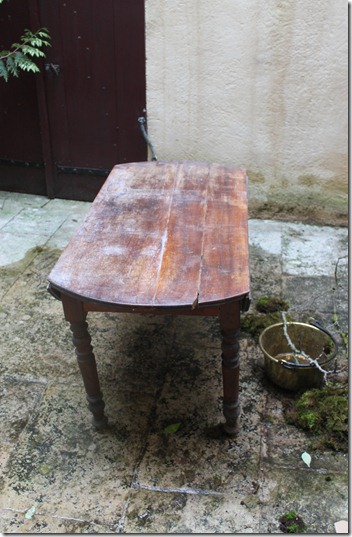 Meanwhile, after the crew left, We had to rack all the wine.  A short time after we started this project, we decided it should all be chronicled, so that meant I was at the laptop and R did the racking in the cave.  With the cooler on, it was like being in a walk in refrigerator.  I had a cashmere scarf on but no gloves, but wow it was cold and damp. 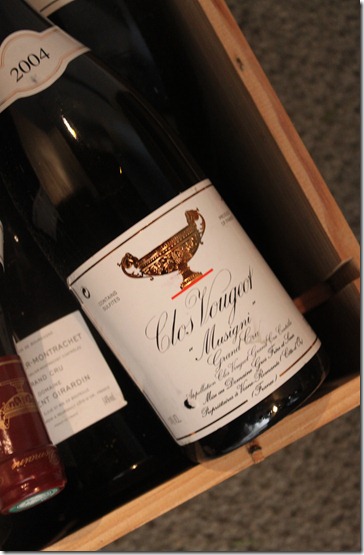 One bonus to this exercise was that we now have thirteen empty wine crates in perfect condition.  You could use the face plates and line a wall or do all kinds of tricks with these, but I’m going to use them in the chauffage.  I hope to finish that before I leave.  More on that later. 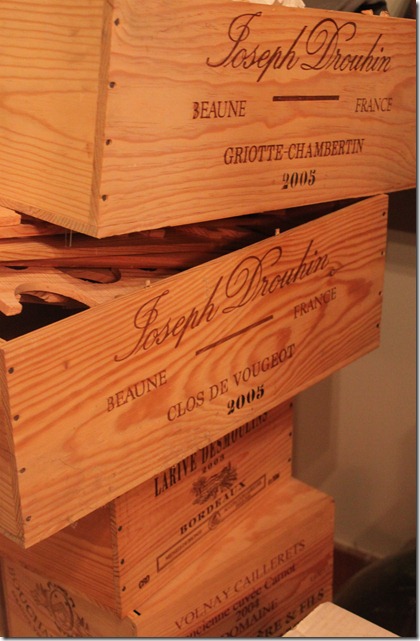 As we unpacked box after box, mostly cardboard but some wooden, I made a few trips to the recycle bin around the corner.  Then I said to heck with it, and I threw all the boxes out the back door onto the little terrace~ 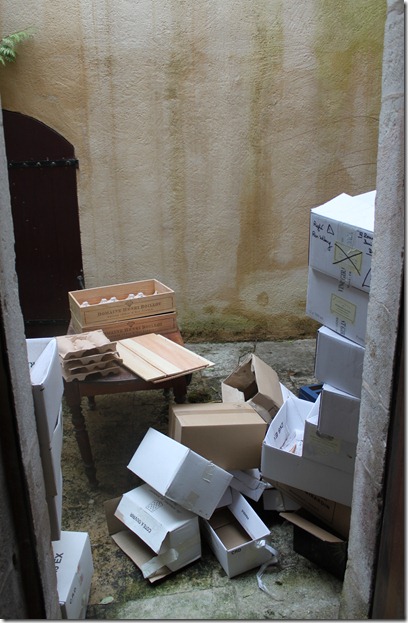 What I forgot to tell you is that the stylist, Jean-Luc, and his assistant Cedric were coming at 4pm.  So around 1pm I decided I had to get busy and prepare for that, which meant removing the glassware from the table and washing and ironing six linen sheets.  Don’t even think of sending a sheet out for pressing in France, it will cost you as much as the sheet itself.  But to avoid wrinkles, you must iron and iron and iron.  And all these sheets are huge.  Pretty soon the grand salon looked like this as I set the sheets out for a final dry so they would be stiff and wrinkle free. I imagined Jean-Luc and Cedric crinkling them up like tissue paper to use for the tree table.  In my mind I wondered if they would be critical of me…..can’t that American girl iron a sheet properly?  Of course every sheet in his shop is perfect and wrinkle free.  They were quite complimentary in the end, but I wanted it all to be perfect. 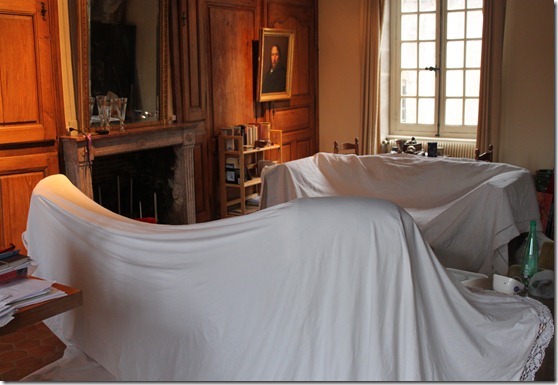 A little before 4pm, I checked and all the sheets were dry.  But oh, I’d better close the back door for the horror that is out there; here is the view out the salon window; and this is most of his wine, we had not unboxed mine yet~ 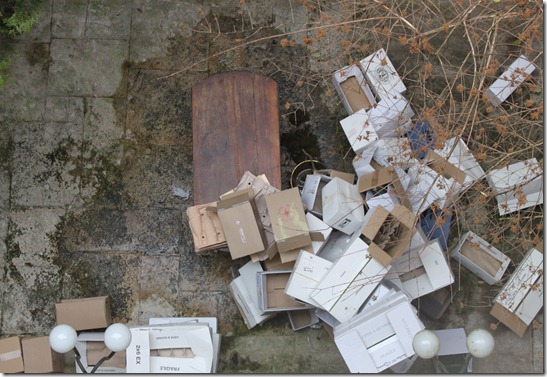 Just before 5pm R mused if they were coming or not.  Is it too late?  Non, bien sur.  A few minutes later, Jean-Luc and Cedric were at the door with a dozen boxes and bags and baskets loaded onto a small charriot.  “La fete est arrivee a ma porte,” I exclaimed!!!  Jean-Luc wanted to see the “new” cave and gushed a little about the result as I asked if he would like a glass of vin rouge.  Ah oui, bien sur.  Soon the three of us got to styling; first the dining table. Jean-Luc is like most French, in that he emotes.  Some decorations and settings are too….triste.  Too flat.  I could make a French face for you that would say it all; too bad I can’t video that haha.  He doesn’t really like sober colors for holiday; nothing too gray and simple for Noel.  This table will be bubbly and festive; you will know right now it’s Christmas. We used a combination of my stuff and his stuff and chatted away as we worked, and before we knew it, we had set a fantastic table.  After the dining table and the mantle in the petit salon, we moved upstairs to the grand salon.  In the middle of this room I have the sapin de Noel or Christmas tree, on a table as many French seem to do.  The table is skirted in layers of French linens, and Cedric expertly went around the table pinning the linens.  When you see the final result, you will know why I will probably always do a round table this way again for a party.  So simple yet so perfect; it says party.  It says fun and festive.  Cedric was laughing at me when I took a pic of his pin cushion.  A pin cushion…pin cushion….is this not cool~ 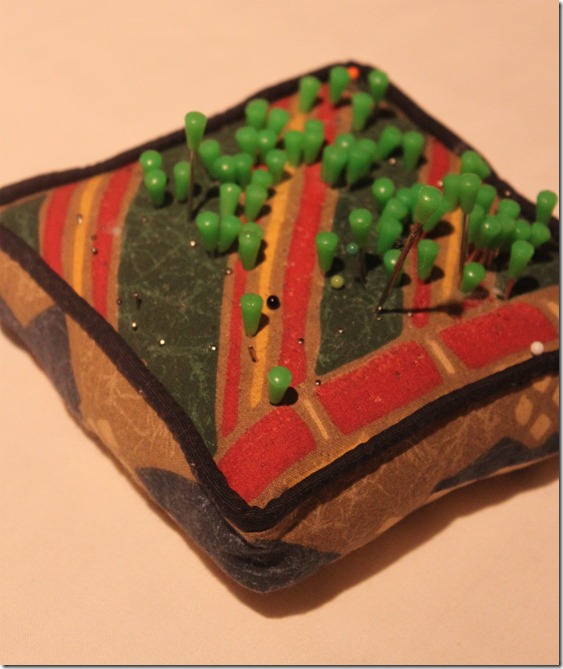 As we began to work in this room R announced that he was hungry and what is it that we are having for dinner.  This was a prime opportunity for me to say for once “let’s go out, later,” but I gave him reheated quiche and pumpkin soup, which seemed to tide his hunger.  I got back to taking some trial photos and adjusting this and that with the styling while Cedric did his thing.  Jean-Luc went to close his store then came back with a small panier full of the little fake birds I showed you in his shop.  Tomorrow R is gone to London for the day, from 6am to 11pm, and so during that time I will take a ton of photos and mess around with the styling.  After I clean the mirrors and polish a special piece of copper and wax the balustrades on the stair as I do once each year.  I will try to show you more elements, but I can tell you this will be a really wonderful shoot. 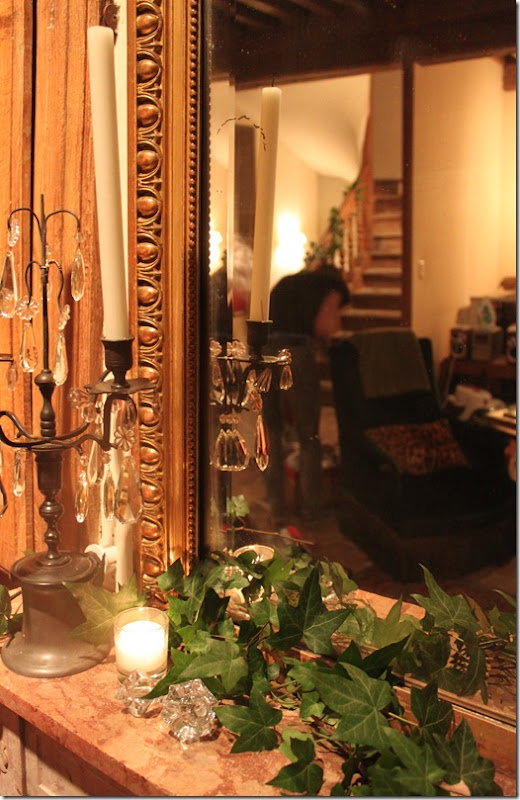 Jean-Luc spied the wooden wine crates as he was leaving.  “You’re not throwing those away, are you?”  I showed him the chauffage and explained what I want to do and he thoroughly approved.  “I never throw anything away, not wine crates, not escargot shells, not twine.”  He loved to hear that.

Dernier Mot: “Don’t throw anything away,” he said.