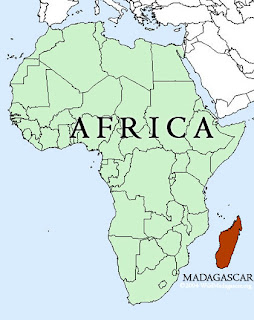 I get such an array of questions when people see the baskets for the first time; the original reaction is that they are very pretty, colorful and well-made; the following question usually centers on origin: Where are these made? or my favorite, "Do you make these yourself? No way could I make thse baskets! Do they come from France? Any of these questions allow me to share a little bit about the fascinating island we call Madagascar.
Madagascar is the world's 4th largest island, after Greenland, New Guinea and Borneo; it is off the south-east coast of Africa. Its land mass is greater than France, and 80% of its flora and fauna are not found anywhere outside the island (think of the ring-tailed lemur); it supplies the best vanilla in the world (the real stuff not faux!). It is a "least-developed nation," the 13th poorest country in the world. It is rich in natural resources, with rain forests, minerals and renewable natural fibers, such as the raffia and grasses that make these baskets. Its poverty also means there are considerable problems with "slash and burn" deforestation (and the many ecological problems which follow) and mining of its natural resources. Every few weeks I meet someone who understands the travesty of the deforestation and mining that goes on in Madagascar; I can't repeat what they say, but suffice to say they are angry that this kind of depletion and ruination of a uniquely natural island is allowed to happen. I also get a handful of people who say "Oh, Madagascar, we loved that movie!" Now I can't believe that the movie discusses any of the real issues; it's about escapee zoo animals from New York, right? It's not the most erudite association for the island, but I guess it did raise awareness of the name....
The Malagasy language is closer to that of Borneo than Africa, because it was Pacific Islanders who substantially settled the island. I hate to oversimplify, but I'm giving you the "101" remember. The French annexed the island in the very late 19th century, until independence in 1960, and the educated (and my suppliers) speak French to this day. A good thing, since I do not speak Malagasy!
There are a few other strange twists in the tale, but I will stop here for now.
Madagascar has been struggling for years to break free from its poverty. The situation has become more difficult since January 2009, when the President of the country was challenged by the mayor of the capitol city, Antananarivo. The President eventually stepped down. It's a very sad situation for the citizens; my suppliers tell me they try to get out and continue with their lives, but I know in my heart that it is a difficult situation for them. We have nonetheless been able to transact business, and the summer order is now in Los Angeles.
I have not been to Madagascar yet, though of course I very much want to see the country and meet my suppliers. It is a 10+ hour flight from Paris, and Air France is basically the only way to get there, and it's a long haul by any measure. I hope to go in the next year, but that will depend on my time and the political situation.
In the meantime, I have wanted to work on an informal micro-finance program. Some friends at the U.N. are working on a formal program; (the U.N. and the World Bank both support Madagascar and my suppliers). I have a lovely, respectful and collaborative relationship with my suppliers. The baskets are produced under conditions of Fair Trade and Fair Wage; your purchases are helping my suppliers in Madagascar.
Aux mes fournisseurs: je suis tres fiere des toutes vos travailles cette annee; avec toutes mes remerciements et meilleurs voeux,
Andrea
Posted by French Basketeer.com