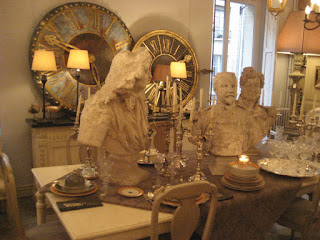 This morning I had the pleasure of attending my first meeting of the Laguna Beach Sister Cities Association. Laguna and Menton, France have been working on this relationship and cultural exchange for the last few years, and have officially been "sisters" since last spring. I remember it was the about same time that we launched French Basketeer, which as I mentioned, was a crazy busy time for me.

I saw an article in the paper about the Sister Cities Association recently, and decided that it would be only natural to be a corporate member, so I signed up. My booth is a magnet for lovers of all things French. People like to come up to the booth and try out their French. It usually stops there, after a two phrase exchange, but it's fun. Anyway, I came today to introduce myself and show my wares, see what it's all about, and I also wanted to tell the group about the French Festival in July in Santa Barbara. I met the fest director recently, and I told him I would get the French crowd from Laguna there if I could, which may not be hard as this is the 21st year of the event and it's quite a spectacle.

For some reason, I was thinking that I would be making my introduction in French. I don't know why I thought that, and the meeting was of course conducted in English.

Someone asked me politely this morning, are you French? Do you speak French?

Once upon a time, I was a huge Anglophile. Huge huge. In high school I did an exchange to Dublin, and visited London for a few short days, and I was hooked, but it was just a tease. Later, I had a long time boyfriend from Oxford, who lived in Scotland and then in London. I couldn't get enough of the whole scene, and we were in love, and both of us flew back and forth from London to NY a lot. I also lived in London for a while in my banking days, splitting my time between Stockholm and London.

Fast forward a few years: after 7 years in New York, I was preparing to go work for my company in Paris, and then the whole deal fell through when they decided to close the office. One day, while walking up 5th Avenue, I had a flash: to do something I had always wanted to do, and go live in Paris anyway and study art history. And I would find a "walking dictionary" (a French boyfriend) so I could stop looking up words, I could simply ask him. So a few months later, off I went; I was there for several years and completed all the courses at the Alliance through advanced conversational French, a course on the history of Paris at the Louvre, a year of drawing and painting classes at les Ateliers du Louvre, and the biggie, a 3 year course at the Ecole du Louvre in art history including one day each week of "study before the works" in the Louvre or Musee d'Orsay or a site at a monument of Paris with my specialist instructor/curator and a group of 10 other students. Art History to them is quite comprehensive: art, civilization, history, scuplture... "Modern," for the French art historians, begins at the end of the 17th century. I'll have to post on all that later.

So, I was an Anglophile... until I discovered the continent. After several years in Paris, I learned my way around the city, to about the same depth as 13 years in New York. Forget England, the continent was where it was at! Goodbye florals, chintz, Oxford Street and Top Shop, the Liberty store, Stonehenge, weekends in Devonshire, pints, pub food and chill to the bone damp; it was Pierre Frey and Canovas, NafNaf and skinny suede front jeans, wine auctions and tastings, weekly visits to les Puces, soaring cathedrals, trips to province and Provence and Val d'Isere, la chasse, and several days each year at Roland Garros, the French Open. And of course I was in the Louvre 5 days a week. I am an aesthete, though a low key one, and I really trained my eye for the arts, antiques, design, display and composition. I was in heaven!! During much of this time, I was dating Jean-Francois. C'est grace a Jean-Francois que je parle si bien. He had a double PhD, and both of his parents were professors of Classics at the Sorbonne. It was terribly important to him that I spoke perfect French, so he corrected me mercilessly. He also liked to talk, a LOT. When we'd travel around France in the car, sometimes I would count the seconds of silence to amuse myself. I never got very far. But it definitely helped my French, to listen to whatever was on his dear well-educated mind.

Jean-Francois came back to the states with me when I left France, and stayed with us for a month. It wasn't completely pleasant for everyone, and he really did not like anything American (except me of course) and was completely critical of my country. So it didn't really work out...

Since then, I have been to France regularly, as often as possible. R and I spend our spare time in Burgundy, though there is precious little of that these days! I make a point to keep up on my French and use it when I can, though I learned it so thoroughly, I will never forget it. The French have a hard time figuring out where I am from and sometimes they arrive at a guess through the typically French process of elimination: I am not American, not British, possibly French (but they aren't 100% sure), possibly Dutch... My accent is clearly Parisian and my phrases are well-constructed. It doesn't hurt that I love language. I've studied Latin, Spanish, German, Italian, Japanese (scoshi) and French, so I would definitely say language comes easily for me.

French Basketeer also helps me keep up on my French since my suppliers and I conduct all of our business in French. That is, since I do not speak Malgache or Arabic and they don't speak English. I find it absolutely incredible that 50 years after independence they are still speaking French!

So today when someone asked me, I smiled; yes, I speak French...
p.s. I took the photo in one of my favorite shops in Paris.
Posted by French Basketeer.com