Where to get a Manicure 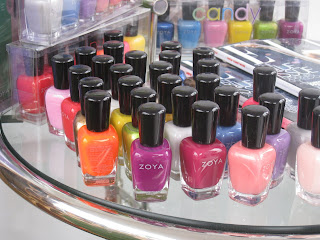 Today I was back at the Brentwood farmers market. Elle was there again, next door, and I had a few minutes to chat with the girls who were working the booth. Two of them are "mobile" manicurists, working on movie sets (the "industry" again), and I assume making house calls. For this "green" booth they had the Zoya Brand of "non-toxic" nail polish http://www.zoya.com/; when I read the Zoya site and what was not in their polish, I stopped at formaldehyde. Formaldehyde can knock off your liver and kill you if you drink it, and most people remember it from Biology class to preserve specimens. I'm not a hard core greenie, but I'll pass on any of the toxic stuff, even if it's in a small dose, like conventional nail polish....I won't even touch the fumes of acrylic nails here.

It was really incredible that these polish changes in the Elle booth were actually free. How nice is that? And how often does that happen, by an "industry" mobile manicurist?! There are some people who believe that everything in France is superior to the equivalent in the U.S. I'm sure all those people live in France, not here (and I can name a few!), but I want to point out that the United States is the BEST place to get a manicure. I can count on one hand the number of manicures I have had in France, and I don't think I have ever had a pedi there. It's a soak in the tub instead. "Manicure" is not on the "to do" list of most tourists, or extended stay visitors. You don't find a lot of nail salons in central Paris, or in Burgundy; you would have to go to a salon or hair & nail place. There are several types of manicures, some are done dry, some are done with warm water as in the U.S.; and you pay more and more for each additional service beyond a dry mani.

I think the biggest reason Americans in France (and many French) don't get manicures a lot is because they are expensive. I don't remember the exact cost, but I seem to remember I'd rather have a bottle of fine Burgundy wine than the manicure I just had. Maybe around $25 for a dry manicure (more like a polish change here). Oh and by the way, a manicure in France does not include nail polish. If you want polish, it costs extra (poser vernis). And don't ever go to France and ask for a "French" manicure; they call it "the American" there. You'll be quietly riduculed.

The best manicure and pedicure I've ever had was at Bliss in NYC. Back when I had a generous expense account, I used to take my female clients there; we'd sit in side-by-side spa chairs and have our nails and toes done and talk business (the men did golf, we did mani/pedis). Bliss did a "milk bath," so you'd soak your feet in warm milk and water. Then they'd work on your feet at a completely unrushed pace so you felt like you were in the Land of Oz ("buff buff here, buff buff there!"), until you left with feet that were blemish and callous free and you felt like a foot model, until you hit the New York City pavement for a few days.

I'm going to order one of the Zoya sets, and hope to see the Elle girls again next weekend. I want to hear more about what it's like to be a "mobile" manicurist in this town.